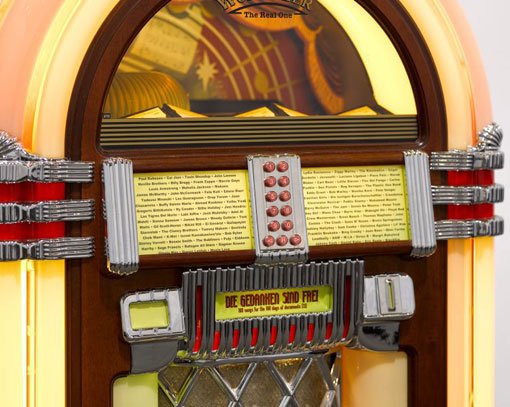 By the time you read this, the Art Gallery of NSW will be open again. With that reopening comes sound that for months has been absent from the building. Footsteps, cutlery, the hum of lights and air-conditioning one barely notices until those systems stop. And the voices of visitors and staff, their ordinary conversations made extraordinary, for the moment, for coming after long months of quiet.

The voice is a social instrument: this observation is so basic as to risk vapidity. I vocalise in order to be heard, if only by myself, and even when speaking (or singing) to myself, I reaffirm my own existence and the possibility – however remote – of other beings who might hear me. The voice says, I am here. It does not say, I am human, for humanity is equally the state of any person who cannot speak, or hear.

During the shutdown, a series of performers raised their voices in the Gallery. Performance artist Maissa Alameddine sang ‘Hal Asmar el Lon’, an Arabic love song, while she stood in front of Lesley Dumbrell’s abstract painting Solstice 1974. The melodic ebb and flow of ‘Hal Asmar el Lon’ finds a visual resonance in Dumbrell’s painting, with its pattern of colours that occur and recur.

When viewed from a distance, the pink strips of Solstice resemble two sound waves moving in parallel. But, like the two lovers of Alameddine’s song, these waves seem fated to remain apart. A voice can be lonely, precisely because the sound of it must carry across the space between a vocalist and a listener. Contagious virus or no, there will always be a distance between us: where I end and you begin.

This paradox of the voice – each one generated by a single body yet seeming, to our ears, to commingle – is most apparent in works that suggest the vocal potential of a crowd. Susan Hiller’s installation Die gedanken sind frei (Thoughts are free) 2012, for instance, allows viewer-listeners to navigate a jukebox of protest songs selected by Hiller. These range from Queen Latifah’s groundbreaking 1989 feminist rap ‘Ladies first’ to the Italian folk song ‘Bella ciao’, which originated in the 19th-century rice fields of northern Italy and evolved, during the Nazi occupation of Italy, into an anti-fascist anthem. Audiences visiting Hiller’s installation can also read wall texts of protest song lyrics, or peruse a songbook that collects these lyrics.

The individual viewer-listener, as they experience this music through Hiller’s work, cannot help but be reminded that the power of a protest song lies in many single voices raised at once, sounding together. Whether at a pop concert or out on the street, the singing of a protest song at once asserts each singer’s presence – I am here – and also their awareness of the presence of others – I hear you. A protest song is a call to join with a community of voices, however temporary that community might be, perhaps lasting only for the length of the song itself. 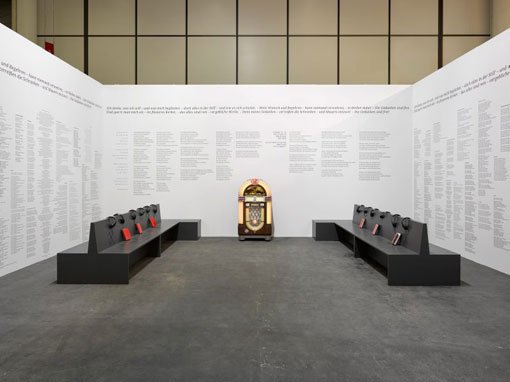 The protest song’s social impetus makes a lone voice singing it especially poignant. I think of Chilean singer and activist Victor Jara, who was arrested shortly after the 1973 military coup against elected socialist president Salvador Allende. Jara was imprisoned, along with thousands of other left-wing activists, inside the Chile Stadium in Santiago. Tortured and mocked by Augusto Pinochet’s soldiers, his fingers broken so that he could not play guitar, Jara sang the protest song ‘Venceremos’ (‘We will triumph’) before he was murdered. ‘Peasant, student, worker’, runs Jara’s version of ‘Venceremos’, which he wrote especially for Allende’s election campaign, ‘All our comrades join us in song’.

Hiller’s jukebox also brings to mind the sound works of Scottish artist Susan Philipsz, especially The Internationale, which has been installed at various locations around the world, including Cockatoo Island in 2008, during the 16th Biennale of Sydney. Philipsz’ Internationale is a recording of the titular song, which has been a revolutionary anthem since the late 19th century. With lyrics by the French anarchist Eugène Pottier and music by the Belgian socialist and wood carver Pierre De Geyter, the composition of ‘The Internationale’ was an enactment, in miniature, of the global solidarity and cooperation that the song itself calls for. But in Philipsz’ installation, the song retracts to a lone voice – her own voice – broadcast via a public address system.

The absence of the body in Philipsz’ work turns her singing of ‘The Internationale’ into something quite ghostly, a voice without an origin. A ghost is a thing that sounds, or appears, out of time: an apparition of the past (or the future?) that we sense in the present. In Philipsz’ work, the human voice ceases to be a corporeal phenomenon, insofar as a recording of the voice can long outlive the person to whom that voice belonged. Instead, her disembodied voice haunts us, and part of the poignancy of Philipsz’ Internationale is its evocation of the countless voices, together and alone, that have sung this song before, but went unrecorded, and so remain dead. ‘A spectre is haunting Europe – the spectre of communism’, wrote Marx and Engels in the famous opening sentence of their Communist manifesto of 1848. Philipsz’ work attests both to the ‘death’ of state communism, and to the human deaths it caused, but also to the spectral presence of an opposition to capitalism, which might be called a non-state communism. In time, interrupting time, the ideals of ‘The Internationale’ – the freedom of workers, the abolition of the military – may yet become manifest.

In her work, Philipsz draws our attention to the role of audio technology in mediating the voice. When recorded and broadcast, does the voice remain ‘human’ or is it being equally created by machines? This question has been addressed in all manner of ways – explicitly, implicitly, playfully, seriously – in the music of recording artists from German electronic group Kraftwerk through to Laurie Anderson with her unlikely 1981 hit ‘O Superman’ and contemporary pop superstars like Kanye West and Rihanna, who use Auto-Tune to manipulate their voices, making them glistening, post-human, ‘unreal’.

Rather than oppose the ‘real’ voice to the mediated voice, human versus machine, we might think about the ways in which the voice is mediated by all sorts of things, including our own bodies. It’s another basic point, but it remains extraordinary – at least to me – that because of the bone conduction produced by my skull, I never hear my voice in the way that other people hear it. The body itself is an instrument that intervenes between my voice and my hearing it.

I contemplate this strange sonic intimacy – my voice that I know but do not know, a part of me and yet a sound that carries outside of me – just at the moment when the COVID-19 lockdown is becoming less strict. The isolation of the past few months will soon, I hope, be a memory, but before it ends, I want to note something of the sonic landscape of this time. Phone calls, podcasts and recorded music on vinyl, on YouTube, or via digital streaming. Voices wafting up from the pavement and into my ears through the glass pane of a first-storey window. Other people’s phone calls overheard, or their car stereos. Dogs and magpie song, for voices can belong to non-human animals, too. High wind, the chug of buses, and, if I listen closely, the beeping scanner at the counter of the local supermarket.

I can hear Maissa Alameddine’s song, and the echo of her voice in the empty Gallery, with no other bodies to absorb the sound, because her performance was recorded. I listen to Queen Latifah’s ‘Ladies first’ on Spotify and hear a dozen versions of ‘Bella ciao’ on YouTube. This is not to suggest, credulously, that these corporate digital platforms deserve my praise – after all, both Spotify and YouTube are notorious for undercutting musicians’ pay with their paltry streaming royalties. But I do want to suggest that a voice can reach our ears in many ways; we don’t always have to be standing in the same room as each other in order to hear each other, or to heed another’s call for community.

A last memory, a sound from the past: 20 years ago this year, I stood among a crowd of 20,000 people protesting a meeting of the World Economic Forum, outside Crown Casino in Melbourne. The anthem of that three-day protest was John Farnham’s 1986 hit ‘You’re the voice’, appropriated, semi-ironically, by a crowd who’d grown up with it ruling the airwaves. ‘We’re not gonna sit in silence / We’re not gonna live in fear’, Farnham sings, but ‘in fear’ of what? The answer never arrives. ‘You’re the voice’ is a generic protest song about nothing and nowhere in particular, which made its use by S11 protestors both facetious and pointed: a hollow artefact now made to sound out for specific purpose.

And what was our purpose, our protest? I cannot speak here for everyone who was there, but to my mind, the S11 protest – one of many mass protests that convulsed the globe at that time – was a protest against a shared sense of powerlessness. The fact that workers’ rights, public services and environmental protections were increasingly being destroyed by large corporations and neoliberal governments angered and frightened many people. This is what we were ‘in fear’ of. I think that those who protested raised their voices in order to not feel voiceless.

In recent months, as COVID-19 has reinforced inequalities of wealth, labour, health, education and environment, I’ve thought again about those protests. It’s not as simple as saying, ‘We were right’, or ‘I told you so’. It’s more that I still wonder how best to listen to the world, and how I might add my voice to others’ voices, no matter how distant we are.

Anwen Crawford is a Sydney-based writer and critic. She is the author of Live through this, and her second book of non-fiction, No document, will be published in 2021.