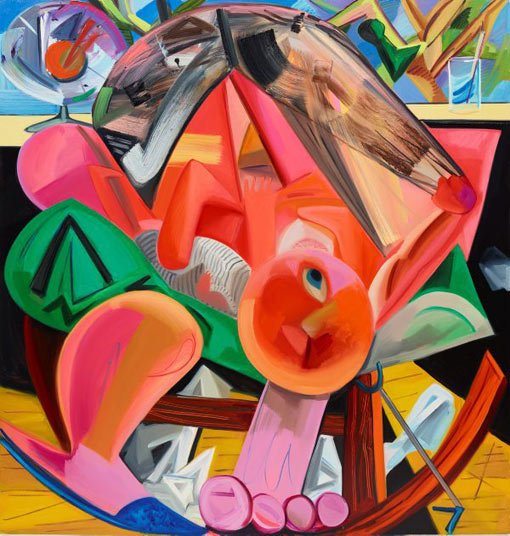 What kind of face should you show to the world when the world has turned thoroughly weird? We went looking for answers to this question in the Gallery’s contemporary collection. Below, five Gallery staff choose five self-portraits that were created in the 21st century, and describe why these artworks have something to say about life here in 2020.

Hi fellow mums! Do any of you find Dana Schutz’s self-portrait (pictured above) particularly relatable right now? When I first saw this painting of Schutz breastfeeding her new baby, I was a new mother myself and felt that no artist had captured the highs and lows of parenthood more accurately. Incredibly confusing, heart-bursting, wearing and wonderful. And yes, where is that missing slipper? But now, in the confines of our homes, Schutz’s painting resonates in a new way. Schutz talks about her paintings as having ‘compression’, as being frantic gestures in a confined space. Certainly, there’s a frenzied and almost ridiculous energy that’s ready to burst out from her painting. Sound familiar? The embroiled mother wrestles with her new baby, new expectations and sense of self. The child, the still centre of the hurricane, has one eye on her parent at all times. This is a portrait of pandemic parenthood, and – as one of Schutz’s first paintings created back in the studio as a brand-new mum – it’s a timely reminder of the many juggling acts in an artist’s, and a person’s, daily life. 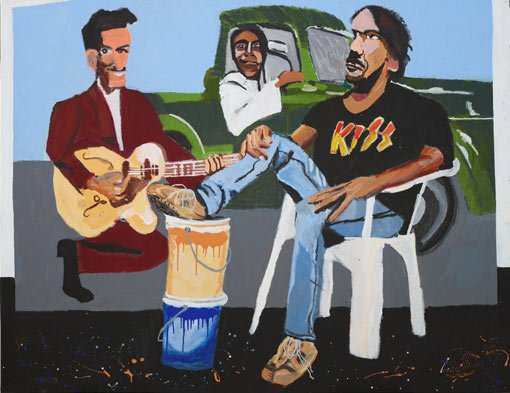 In a time when the lines between personal life and work routines are increasingly blurred, it’s not uncommon to go days without showering or to find yourself attending an all-staff Zoom meeting wearing a freshly ironed shirt, neatly tucked into your pyjama pants. It’s an everyday battle.

Vincent Namatjira understands. The daily battle between paint and canvas, inherited legacies and everyday experience, has defined his achievement as one of Australia’s most engaging and forthright artists. His unique body of work offers jovial yet poignant reflections on Australian history, politics and contemporary realities – none more relevant at the moment than his Studio self-portrait 2018, which was highly commended in the 2018 Archibald Prize.

Vincent depicts himself perched in front of a painting of his late grandfather – the artist Albert Namatjira – and rock’n’roll musician Chuck Berry. He portrays a moment’s rest with painted family and friends at the end of the working day – and generously invites us to take part. A moment to find solace in those daily rituals and simple gestures that, now more than ever, define who we are and how we navigate this space. 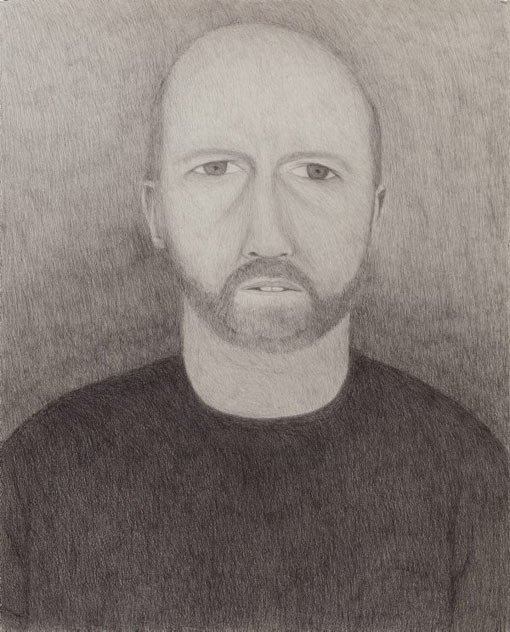 Richard Lewer’s approach to the difficulties of life is not to hide, rather to run full-tilt towards them with an open embrace. In recounting stories of famous disasters and tribulations intertwined with searing episodes from his own life, Lewer’s art speaks to our capacity for empathy that comes from shared experience.

Lewer’s candid self-portrait It’s like I’m full of holes and sinking was made as part of a series of nine drawings of people in the artist’s orbit who, like him, have experienced some form of depression or anxiety. Including himself as an equal participant, he demonstrated an openness about his own afflictions that encouraged his other subjects to be similarly brave. While Lewer approached their stories with the objectivity of a documentary-maker, the resulting works have an unflinching honesty tempered by the artist’s own skilled and tender way with pencil.

Drawing for Lewer is not just a form of expression, but a way of achieving personal catharsis and establishing a balance that is pivotal in his well-being. The practice of making a drawing – deploying materials through rhythm and time – is a form of escapism that is also a way to remain healthy. As we look into the eyes of this uncompromising portrait rendered densely in mesmerising strokes of soft graphite pencil, we see an elegy on human suffering, but also a gentle assertion of resilience. 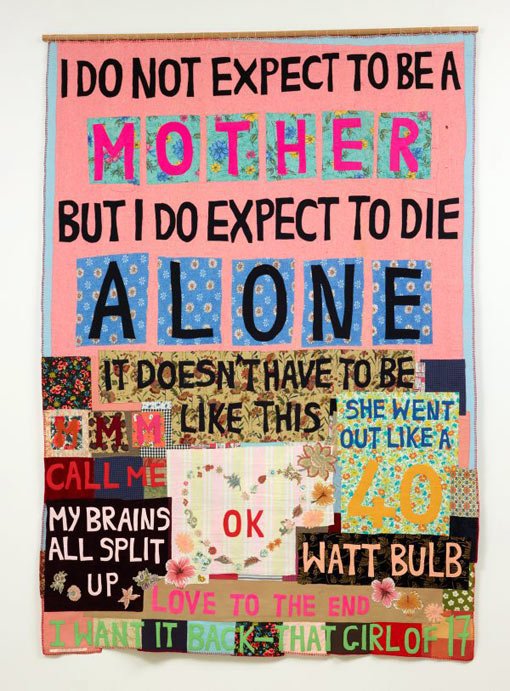 In my book, all of Tracey Emin’s works are self-portraits. As she sewed into the fabric of her first famous work, Everyone I have ever slept with 1963 – 1995 1995: ‘myself, always myself, never forgetting’.

Often criticised for revealing too much, Emin’s raw confessional works are, for me, as intelligent as they are indulgent. I do not expect 2002 begins from a place that is literally self-centred. But give it time and it opens onto nuanced, sometimes needle-sharp, social insights.

We’re familiar with the image of quilts as comforting domestic objects. But this textile is not the product of a warm needlework circle, where objects are made with collective love to be handed down through the generations. Rather it is the product of one artist’s singular pursuit (albeit one brought to completion by studio assistants) flavoured with defiance and bitter regret, and put aside for no one.

So there’s a tension here between the familiar form and the far-from-reassuring content. This is what compels us to read between the lines of Emin’s seeming narcissism and find a commentary on women, aging and artistic ambition. In proclaiming her ambivalence about traditional maternal roles, isn’t Emin also declaring her unambivalent commitment to self-portraiture and art? 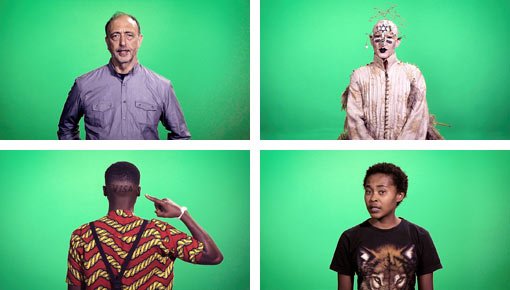 A friend at work recently commented that our daily online meetings made him think of the work of South African artist Candice Breitz. He was onto something. Candice is renowned for her multi-screen video portraits, wherein self-expression becomes entangled with collective identity.

In one of my favourite of her works, King (a portrait of Michael Jackson) 2005, 16 ardent MJ fans sing his chart-topping Thriller album in unison. Jackson himself is nowhere to be seen, but the idiosyncratic amateur performances strangely amplify our identification with his music, all the while underlining the corporate interests that facilitate pop music’s global appeal.

Similarly, Profile is a self-portrait in which the artist is conspicuously absent. Made for the 2017 Venice Biennale, in which Breitz was selected (alongside Mohau Modisakeng) to represent South Africa, the video cleverly draws our attention to the absurdity of individual artists standing in for the art production of an entire country. The work instead presents us with ten prominent South African artists standing in for Breitz. Each assures us that ‘I am Candice Breitz’ and describes themselves (with varying degrees of believability) according to collective terms such as race, class, sexual orientation, occupation and religion.

Concluding with the statement, ‘I am Candice Breitz and I approve this message’, Profile reveals self-expression to be a privileged, institutionally sanctioned act.