A recent conservation project has brought an important Australian painting – Hugh Ramsay’s The foil 1901 – back to life.

Australian artist Hugh Ramsay arrived in Paris in January 1901, aged 23. He moved into James Macdonald’s studio at 51 Boulevard Saint Jacques – captured in his self-portrait The artist’s studio 1901 – and enrolled at the Académie Colarossi, rue de la Grande Chaumière in the 6th Arrondissement. His Scottish cousin, John Forrest Ramsay, who stayed with him for a few weeks, sat for a portrait. Titled The foil, it shows John standing in front of a wardrobe, wearing Hugh’s personal fencing attire and holding a fencing sword, known as a foil, with his right hand. This full-length portrait clearly shows Hugh Ramsay’s admiration for the Spanish painter Velázquez, especially his 1628 portrait Felipe IV now in Madrid’s Prado museum.

The foil was gifted to the Art Gallery of NSW by the artist’s family in 1943. In 2014, thanks to Manny and Gail Pohl and a generous donation from the Pohl Foundation, we initiated a major conservation project – Gallery conservator Barbara Dabrowa undertook the frame conservation and I worked on the painting. 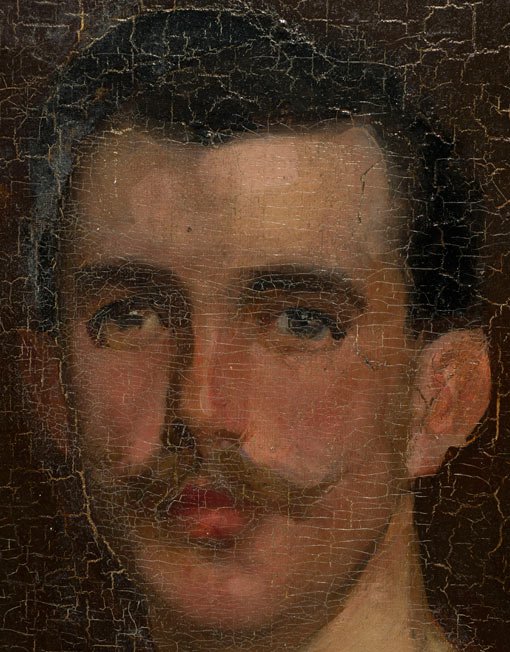 The frame’s condition had deteriorated through the years: the top layer of blitz bronze had oxidised, becoming very dark and there were losses, cracks and dents.

The main damage to the painting’s surface was the drying cracks, caused by the different drying rates of the ground layer and paint film. According to analysis done by Dr Brian Singer at Northumbria University in the UK, the binder of the paint film is linseed oil – which is fast drying – while the ground layer contains poppyseed oil – which is slow drying. The different drying rates of the ground and paint layers pulled the paint layer apart, creating a network of white lines which is visually very disturbing. Drying cracks like these occur soon after a painting is finished so there is a chance Ramsay may have seen the cracks appear on his painting. Our treatment approach was to remove the varnish layer, apply fillings in the deepest cracks, retouch all the cracks then revarnish the painting. This brought the subject the subject and all the details of the representation back to life, as the cracks disappear.

The foil is still housed within its original frame – an Italian architectural casetta style, made of timber moulding with a carved decoration of guilloche patterning between two taenias. The timber surface was painted with blitz bronze (brass particles in a medium) then given a matte finish.

Conservation treatment of the frame included removing the darkened layer of blitz bronze and filling the dents and losses with putty as well as a minimal retouching of the original surface with mineral gold (mica powders).

The conserved painting and frame are now back on the wall of the 19th-century Australian gallery for everyone to enjoy.

Watch the video for more insight into the project.

You can also see details of the conservation treatment in the following slideshow – click on one of the small images to begin.

The painting under ultraviolet light

Before starting any treatment, the painting was closely examined under different types of light – normal, raking, ultraviolet and infrared. Each light revealed a different aspect of the painting that helped us better understand the artist’s methods. The ultraviolet light showed that the varnish layer was very uneven and that the bottom half of the painting had been covered with a glazing.

Removing the top layer of varnish

It appeared under ultraviolet light that they were at least two layers of varnish on the surface of the painting. The first one which is directly onto the paint film is probably original and, even though it is very patchy, it was decided to leave it. On the other hand, the top one was part of a previous conservation treatment and therefore it was removed. The treatment was undertaken in an extraction booth while wearing a solvent mask and gloves because xylene – the solvent used for this treatment – is toxic.

A layer of Regalrez® varnish was applied with a large brush on the surface of the painting. The new layer has an aesthetic and protective purpose, it gives a light gloss to the surface and saturates the colours but also acts as a barrier between the original paint and the next steps of the treatment.

Modostuc® was used to fill the deepest drying cracks. This conservation filler can be diluted quite thinly with water which was helpful given the very fine size of the cracks.

It took two and a half months of full-time work to retouch the entire painting. Because of the sizes of the cracks, the retouching was done wearing magnifying glasses and using a very fine brush. We chose Gamblin® colours as the retouching paint because of their solubility – which is different to the oil paint’s solubility – and their appearance, which can be very close to that of oil paint.

The painting during retouching

The left half of the painting has been retouched.

The painting after retouching

After the retouching was completed, the last step was to apply a final coat of varnish.

The frame before treatment

Due to the oxidation of the top layer of blitz bronze, the surface of the frame looked tarnished and darkened. A number of losses, cracks and dents were also visible.

The first step of the frame conservation treatment was the removal of the darkened layer of blitz bronze that covered the entire frame.

The frame during cleaning

The right section of the frame in this image has been cleaned, showing a marked difference.

The frame after treatment

Once the frame was cleaned, the losses and dents were filled in with putty and the frame was retouched with mineral gold (mica powders).