Ode to Italy: thoughts on Italian old masters during COVID-19 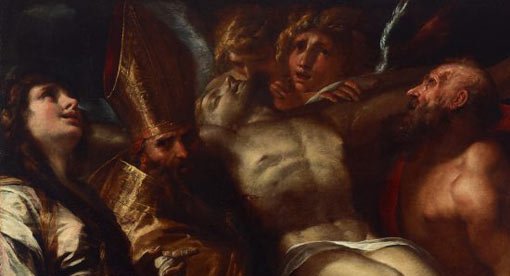 Giulio Cesare Procaccini The dead Christ on the cross with Sts Mary Magdalene, Augustine and Jerome, and angels c1618 (detail)

As we struggle through the escalating crisis of COVID-19 in our own communities and witness its devastating impact around the world, it’s impossible not to think of the situation in Italy, which has been hurt so badly by the pandemic. The capacity to remain optimistic seems fragile amidst such loss. And yet, hope remains an instinct to cling to.

Although our doors at the Art Gallery of New South Wales are temporarily closed, the artworks inside continue to remind us of that very instinct – an instinct encapsulated in four very different pictures from four very different centuries, each one a treasured work from our Italian old master collection.

Not only do they bear witness – at a time when Italy has been brought to its knees – to that country’s stupendous artistic legacy, they explore some of the fundamental experiences of every human life. And while they depict Christian subjects – an inheritance that might seem difficult for many viewers today – they can still speak powerfully of love and suffering, loss and hope, helping to shore us up against the mysteries of life and death and time. 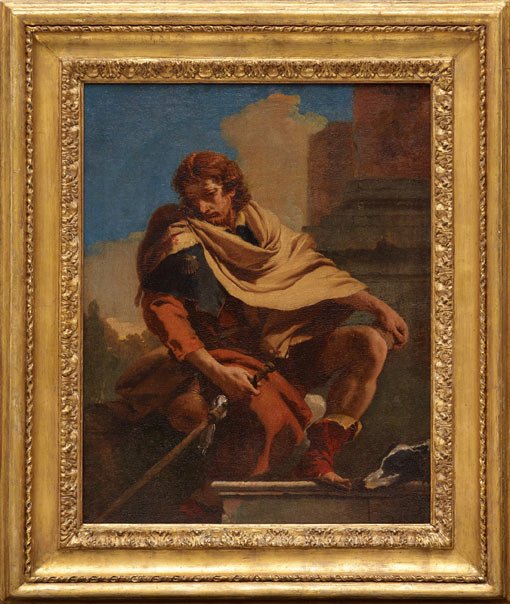 In past ages when death and disease were part of the collective experience of communities, devotional images played an important role for the faithful by offering consolation and protection. Following the outbreak of the black death in the 1300s (regarded as the most devastating pandemic in history), people began invoking the protection of Saint Roch.

Roch’s cult became widespread from the 15th century, and he became a popular subject for painters until the 18th century (when outbreaks of the plague also started decreasing). At this time the great Venetian painter Giambattista Tiepolo produced a series of devotional canvases inspired by the saint’s life. According to legend, Roch contracted the plague while returning from a pilgrimage to Rome, swiftly retreating to a forest where he was fed by a dog who brought him bread and licked his wounds clean.

This appears to be the episode depicted by Tiepolo in our canvas, although he shows Roch seated prominently amid stone ruins. With pilgrim’s staff, gourd, scallop shell pinned to his cloak, and bread in hand, the saint registers his wretched situation with weariness and despondency. His exposed upper thigh reveals a deadly bubo or plague sore – identifying insignia of the patron-saint of the plague-stricken, showing that Roch also suffered the same afflictions as the faithful who petition him. 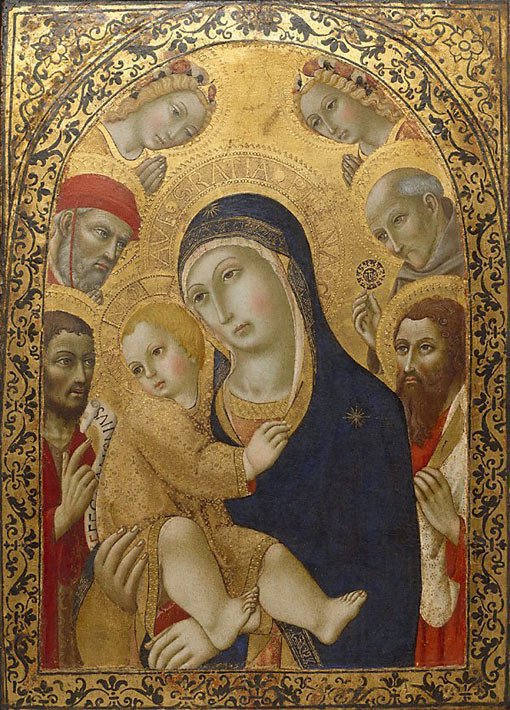 The most common theme in sacred art during the Renaissance was that of the Virgin and child. Sano di Pietro’s exquisite Madonna and Child with saints Jerome, John the Baptist, Bernardino and Bartholomew is the oldest European work in the collection and the Gallery’s only major example of early tempera painting. The gold of the background and haloes, emphasising the sanctity of the figures, was made in the artist’s workshop by beating gold coins into wafer-thin sheets.

Sano maintained a flourishing workshop in his native city of Siena, producing small devotional panels for private patrons. Such images, of which ours is a beautifully preserved example, were intended for personal devotion and were a way of sacralising the home. Certainly, the Virgin nursing her son conveys the feelings every mother has for her child.

However, this is no ordinary baby. In representing the Virgin and child, Sano, like all Renaissance artists who explored this subject, was celebrating the miracle of the incarnation – the fact that God voluntarily descended into human flesh, becoming man while still remaining God, in order to save humanity. Artists often made this point by insisting on the chubbiness of the Christ child. 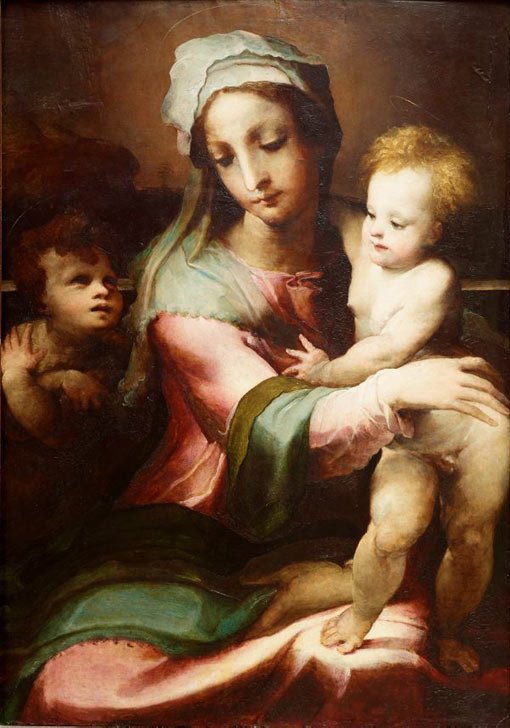 Move forward 80 years or so to Domenico Beccafumi’s Madonna and Child with the infant John the Baptist, also painted in Siena, and everything changes. Beccafumi worked in paints bound not with eggs but with oil. This meant that he could create wondrous effects unrealisable in tempera: the suppleness of the flesh, the iridescent colours, the mysterious illumination, the smoky ‘sfumato’ modelling.

For all the technical and stylistic differences between Sano and Beccafumi (who was steeped in the hyper-elegance of Mannerism), we still have before us a painting that celebrates the essential miracle of God made flesh. Now, however, the Christ child stands on his mother’s lap fully naked, as if to stress that he is a real human and in all parts man. Exposure as revelation, as one art historian put it.

And yet, beneath the effortless grace and artifice there is also sorrow and foreboding. For the innocent infant will grow up into the man who will be tortured and crucified for the sake of human salvation. This sense of tragic foreknowledge is registered not only by the Virgin. All three figures appear united in grave contemplation of the future. 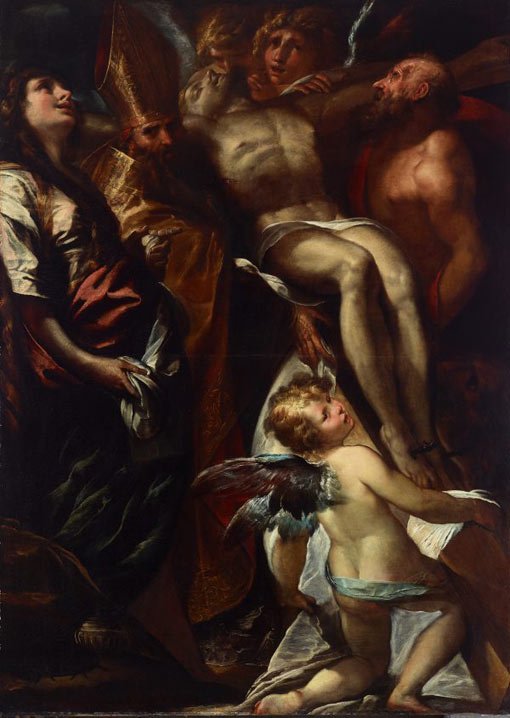 Giulio Cesare Procaccini The dead Christ on the cross with Sts Mary Magdalene, Augustine and Jerome, and angels c1618

The representation of feeling taken to new pitch of intensity brings us to a Baroque painting of truly imposing scale: Giulio Cesare Procaccini’s The dead Christ on the cross with Sts Mary Magdalene, Augustine and Jerome, and angels. It seems somehow fitting to include here a work whose powerfully eloquent message of hope in sorrow was painted by an artist working in Lombardy, the very region of northern Italy that has in recent weeks borne the full brunt of the coronavirus.

Procaccini’s is a personal brand of the Baroque, and this must rank as one of his most deeply moving creations. The subject is completely unique. While the deposition of Christ’s body from the cross was frequently painted, Procaccini shows us Christ’s body still nailed to a cross which itself is being lowered. Highly unusual is the presence, beside the grieving Magdalen, of two saints, Augustine and Jerome. Their presence removes the picture from the realm of pure narrative.

The central message of the painting is, however, quite unambiguous. It is a picture about grief, but a grief tempered by hope. The four protagonists, three living, one dead, together with their pair of celestial attendants, are compressed into the top third of the canvas. They tower above us commandingly. Their faces communicate different complexions of sorrow.

From all this we are kept at a literal distance by the sheer scale of the canvas, but the artist also offers us a hand to lead us in. It is as if the sweet-faced angel holding the bottom of the cross occupies an intermediary no-man’s land between our world and that of the grieving saints. And it is thus that we understand that what we are being shown is not a story, but a mystery. Amid unbearable sadness we find promise…

Previous post: Together In Art: what art museums can do during the coronavirus crisis

Next post: From Oaxaca to Bronte: interview with a self-isolating curator