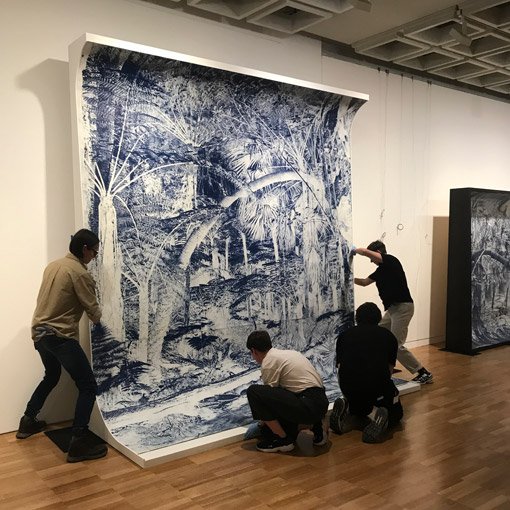 The Dobell Australian Drawing Biennial provides an opportunity for the Art Gallery of NSW to work with, and support, contemporary Australian artists to push their artistic practice and realise their ambitions using the medium of drawing, often in unconventional and innovative ways.

One of the challenging and rewarding aspects of working with artists in the Dobell Biennial is that the artworks often remain quite fluid, right up until the installation is completed. It is a journey for all involved, starting with the artist’s concept and unfolding in an organic, often surprising way.

Danie Mellor’s A landspace: bala ngunyiny [the tableau, bala jarrga] from this year’s biennial, Real Worlds, is one such example.

Mellor’s ‘landspaces’ are informed by his ongoing connection with the Country of his mother’s family of the Ngadjon and Mamu peoples in the Atherton Tablelands of Far North Queensland.

Over nine months, the artist collaborated with the exhibition’s curator, Anne Ryan, as well as the Gallery’s designers, workshop and paper conservation team in order to achieve his monumental drawing installation.

The artwork is made from nine overlapping drawings of rainforest landscapes, rendered in blue wax crayon with oil pigment wash watercolour on paper. These have been mounted to a curved support. Other drawn elements have been mounted to aluminium and suspended with string while a drawn figure been has mounted to plexiglass, then slotted into the base. A taxidermied lorikeet and butterfly specimens also form part of the work. 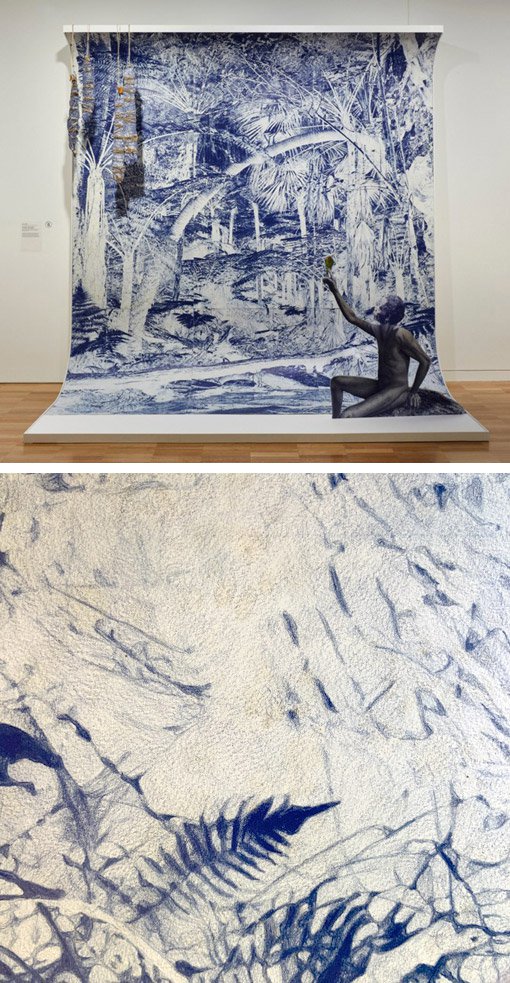 From top: Danie Mellor’s A landspace: bala ngunyiny [the tableau, bala jarrga] 2020 on display at the Art Gallery of NSW; detail of the work showing the pigment wash and crayon drawing

A key part of Mellor’s concept for A landspace was the curve at the top and bottom, fitting with the idea of a curved universe and space/time in relation to Dreaming.

Starting in February 2020, the Gallery’s team worked with the artist to consider and develop potential mounting methods, materials and approaches to realising the curved support. COVID presented additional challenges but maquettes, plans and designs were communicated over emails, texts, phone calls and Zoom meetings during lockdown. Finally, in late September and October the work was prepared for display.

The curved support of A landspace is made of three panels, each around 1m wide by 3m high. Affectionately known as the ‘skate ramps’ due to their shape, these were fabricated in the Gallery’s workshop and then painted to seal the wood. 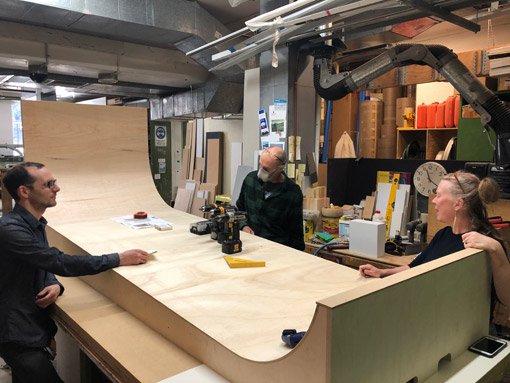 While the panels were being constructed, the mounting of the drawings was undertaken in the conservation lab. The nine sheets were hinged onto a flexible archival card with over 200 hinges made from kozo paper, applied using wheat starch paste. Centre slot hinges were also applied laterally across the sheet to support the work into the curves.

A large amount of space was needed for assembly so the panels were moved to an unused gallery where one panel was worked on at a time, laid horizontally onto a table.

The individual drawings, all with slightly different dimensions, were overlapped at the horizontal edges to form the whole composition. The registration of the image is intentionally misaligned, which allowed some flexibility with the final placement. The mounted drawings were then secured to each panel with strips of Velcro.

After all three panels were assembled, Mellor came to the Gallery to decide on the placement of the additional elements. The taxidermy lorikeet and butterflies had previously been boxed, wrapped and frozen for two weeks to ensure there was no risk of pest infestation.

The installation crew then had to move the panels into position for display – no easy feat given their size and weight. The panels were bolted together from the back and top and the artist made the final placement of the kneeling figure, lorikeet and butterflies, as well as making other adjustments, such as tightening strings and suspending elements from above.

You can catch Mellor’s work on display before the exhibition closes on 7 February 2021, and you can browse a slideshow following the process by clicking on one of the small images below. 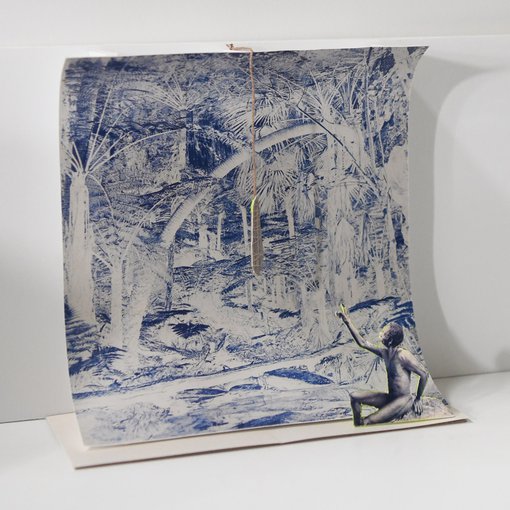 The framework for the panels being built in the workshop

The drawings are positioned on a panel

The taxidermied lorrikeet and butterflies are prepared for freezing

The panels are moved into place in the exhibition space

The figure is slotted into place in the panel.

Danie Mellor secures the lorikeet to the figure’s finger

The lorikeet in place