Joy ride in a TARDIS 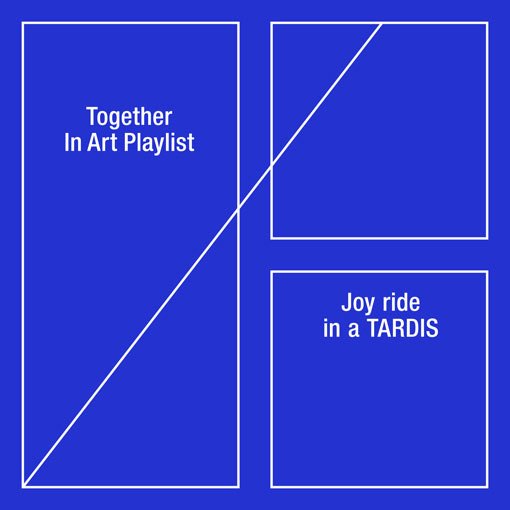 I’ve also, somehow, been playing drums in some of my favourite bands. That I’ve been able to work as both a performer and a technician/administrator in the arts for so long is, well, my good fortune in the lottery of the soul.

A playlist is a how-long-is-a-piece-of-string exercise. So, in keeping with the stay-at-home narrative of Together In Art, this playlist is populated mostly with locals (and thus forms a bit of a resumé – sorry!) from whom I am grateful to have received opportunities and inspiration. I’ll leave the broader palette to my wonderful colleagues.

You can listen to the playlist on Spotify

It’s appropriate to kick off with a song about a painting, by the seminal Sydney band of the punk movement.

I’m privileged to call these folks bandmates. I was four when Radio Birdman started (1974), but, with this type of music, drummers seem to have a shelf life. I’m the second and the fourth drummer for them, and you could not wish to meet a more incongruent but genuine group of individuals: across its lifespan, the band has been home to two doctors (one a hospital director, the other a surgeon and air force pilot), an Archibald-exhibited painter and Disney animator, a noted record producer, a merchant seaman, a Blue Mountains tour guide, a special needs teacher, et moi!

For more, I recommend the 2019 documentary Descent into the maelstrom by Jonathan Sequeira. It focuses on the first incarnation of the band and the inner-city scene it helped create. The band was DIY from top to tail. They started a venue, and a movement. To hear singer Rob Younger describe the time he first bought and played a record sums up artistic motive very nicely.

Anyway, back to the song. It’s about a fake Rembrandt hung above the drinking fountain in the language department at the high school in Ann Arbor, Michigan, attended by songwriter Deniz Tek. Aficionados will know the significance of Ann Arbor in punk lore. A lyric also poignant for now: ‘Empty streets, full of no one’.

I love the urgent meditation in this music. It’s perhaps Dave Brubeck meets The Doors for a drink in an alley in Surry Hills at 4am. It’s off the album Radios appear, which was listed at number three in the ‘Top 50 Australian albums of all time’ as compiled by ??The Age?? in 2008.

These elder statesmen, ARIA hall-of-famers, have helped countless musicians, spawned and influenced many great bands, and shaped culture in Sydney.

In the 90s, I was playing drums with The Celibate Rifles. Guitarist Kent Steedman offered me and two other percussionists (Simon Cox from Died Pretty and Dave Bullock from Kiss My Poodles Donkey) the chance to do an improvised recording for radio station JJJ (‘The J sessions’) with didgeridoo virtuoso Alan Dargin. Alan was an extremely powerful yidaki player, but a gentle and lovely man. Vale.

As percussionists, well, you know the drill – we brought in anything we could hit: tablas, xylo-drums, anvils, chains, shakers, maracas, bongos, woodblocks, containers of salt or walnuts or almonds, slapsticks, clapsticks and bottles.

I’ve included this track in the playlist (there are a few more from the session on Spotify) because I love how it meanders through landscapes; it created pictures of country in us. That it was improvised emphasises the unknown of the journey downriver.

Wish I could paint it.

Adalita sings for Magic Dirt, a wonderful group who emerged from the late 80s Geelong punk scene. They are a force on stage and Australia’s more-than-honest answer to some of my all-time favourite bands: Patti Smith Group, The Pretenders and Blondie (yep, I’m a sucker for a rock group with a great female leader). This song is from Adalita’s second solo album.

The YouTube clip is from SBS’s RocKwiz – a musical wow moment for me and a reminder of some of the great music and quiz shows we’ve had over the years from publicly funded broadcasters. May it remain ever thus as many of us stay inside watching publicly funded television, film and music.

Blue sky is a liberating break-up (or relationship tiff) song. Adalita sings defiantly and freely. The simplicity of the bridge into the chorus is as majestic as the animal and natural images it conjures, rejoicing in pure nature off the back of a relationship mess. The growing melodies release the nerves that, through the verses, have grown tense in contemplating past relationship impasses. Have we been that mf’er she scorns?

One of the great Sydney bands formed by folks who converged here to play. This song, from their second album, is an instrumental, sans singer Tex Perkins, who joined an established instrumental line-up that explored country, blues, reggae, roots, garage, surf and soul music passions in equal measure. This eclectic, scratchy Booker T-type surf stomp was a live favourite, a slow crescendo of exuberance and joy. It’s a song for me that draws a brilliant picture, a mood; makes you swell inside.

I have a wonderful memory of watching The Cruel Sea play this under a cool spring sun at the Bondi Pavilion on a glorious day: straw hats, Hawaiian shirts, zinc, drink, thongs and swimsuits. The audience buzzing, beaming, laughing, responding to the best of Sydney sounds in one of the prettiest parts of the world. I hope you have those moments when you think, ‘I’m very possibly watching a band that is the best in the world at what it does, in a location that is right for it in every way’, and a little while afterwards you realise that it’s going to stick: the imagery, the feeling, the contentment. Now is a good time to draw on memories of those moments.

Artist: The Celibate Rifles
Track: ‘Where the action is’ from the album Blind ear (live) (2016)

When I was the drummer for The Celibate Rifles, I spent a decade touring the world, recording, living the dream. I saw many of the great punk and grunge bands, punk gods and goddesses, and met many brilliant and passionate artists, technicians, crew and administrators along the way.

I could have offered any number of songs written by the Rifles. This one is a liberating Friday-after-work anthem, originally written by Harry Vanda and George Young and performed by John Paul Young at a time when disco was the music and pub rock was rife. As a performer, when you play a toe-tapper like this in front of loads of people, you feel the unencumbered joy of the moment. I hope you can feel and hear the fun in this live version. Keep it in your pocket for the end of the lockdowns.

The Rifles’ singer Damien Lovelock died in 2019, a horrible year for musical loss (this one seems to be heading a similar path). An unforgettable celebration of his life and music held at Sydney’s Enmore Theatre will hopefully soon become a film in tribute to a wonderful man who led a wonderful life.

The Gurus have been one of the hardest-working Australian bands for what will be 40 years next year (keep an eye out for celebrations!). I’ve met a couple of people, and know of a few house pets, named after this song.

This glam, fuzz, garage, proud tribal punk classic is a Polynesian tale of love (and sacrifice) and a total room-shaker. Try not moving when you hear this. I’ve watched this performed dozens of times (and now I get to play it) and witnessed the fire in the eyes, the metronomic head moves. It’s life-affirming every time.

From a Sydney group born of the Birdman scene, this song is tragic and beautiful, and sadly apt for this chapter of our collective book. It has, for me, been a bridge through stages of grief to acceptance – memories, tokens, appreciation, comfort and respect for those passed.

I love and admire the craft of a great sad song, especially when it doesn’t incorporate the usual cheesy tricks. Dairy-free here. All soul.

Finally, my only foreign entry and only new release, from an almost 79-year-old master. He is Yoda.

The word ‘genius’ has been as overused in recent times as ‘unprecedented’ has been in 2020. But as Bob drily replied on one of his fantastic ‘Theme time radio hour’ shows (2006–09) when Lucinda Williams was named Time magazine’s songwriter of the year, ‘I musta been outta town’.

When I saw him last year, I happily sobbed during the set. When I sat in our kitchen with Catherine and coffee, hearing this song for the first time through the pianissimo rain, 17 minutes felt far shorter, like hitching a quick joy ride in the TARDIS.

His voice sounds like diamond and granite minced up in an oily, Marlboro-stained rag dragged by a Harley through every US state, spoken over a small ensemble of virtuoso musicians engaged in a kind of measured free-forming: piano, violin, drums, all acoustic. It’s the sound of old wood and alchemy.

It’s not light listening, because it has so much weight and word play, so much wisdom and expertise. It was apparently recorded a couple of years back, released recently and freely by Dylan.

Everything is timing. Mother nature has sent us all to our rooms to think. We’ve been a naughty species. Bob uses the assassination of JFK to point out ‘business is business, and it’s murder most foul’. A tenuous connection to draw?

If there is a greater artist drawing breath, they might be out in the desert painting millennia.