Have I got your attention? 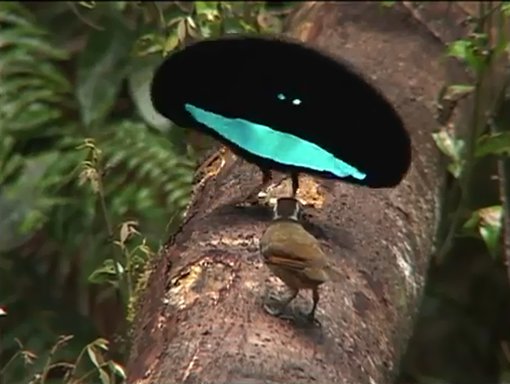 Superb Bird of Paradise, still from video by The Cornell Lab of Ornithology under its terms of use

In the highlands of Papua New Guinea, some young men wear wigs decorated with bright bird plumes as part of a traditional bachelor cult. Just like in nature, these fine feathers are used to attract attention.

The male Superb Bird of Paradise makes the most of his natural assets in a bizarre and elaborate courtship display, which is captured at the start from the Birdsofparadiseproject.org

In the Hela and Enga Provinces of the highlands of Papua New Guinea, feathers from a variety of birds are used to decorate human-hair wigs worn by men in association with important initiation and exchange ceremonies. Self adornment – or bilas – is one of the key skills passed down through generations of men and boys. This knowledge (mana) is important in distinguishing the Huli people from their neighbours. The act of adorning the body empowers men with strength, vitality and pride.

When the breastplate of the Superb Bird of Paradise is used as a decoration for a human-hair wig, its direction is deeply symbolic. If the wig curves downwards while the breastplate curves upwards, the wearer has not yet been initiated. The wig is therefore not for public display. If – like our example from the Gallery’s collection – the wig curves upwards while the breastplate curves downwards, this indicates that the wearer has achieved knowledge, but does not need to boast about it.

A mandá hàre (‘red hair’ wig) signifies that a young man has passed into adulthood, and the process of attaining power and knowledge has been achieved. The forehead is associated with knowledge, and the transformation of this area through the wearing of a wig indicates that the bearer has the capacity to make speeches in public. Red signifies blood, which is inherent in life.

Young men of around 15 years of age choose to spend up to two years in the bush, in strict seclusion, as part of the haroli bachelor cult. During this time, they undergo harsh rituals to cleanse their bodies, eyes and minds of the strong (and possibly deadly) influence of female ‘pollution’, in particular menstrual blood. They are not allowed to have any contact with women, thereby ensuring purity and the ability to develop masculine strength. The novices grow their hair with the aid of herbal leaves and magic. From these hairs they make wigs (mandá). When they are ready for initiation, their hair is cut and given to a wigmaker to construct a wig for them. The wigmaker imbues initiates’ wigs with magic (haroli mana).

The wigs are constructed by an experienced wigmaker either on the initiate’s head or on a stump of wood. This particular mandá hàre has a foundation layer of burrs, but a mud/soil mix can also be used. Small bundles of teased and matted hair are then added using a specially designed poking stick. Within these wigs are split pieces of bamboo or cane, which create a structural framework. Once a large enough bundle of hair has been matted together, a piece of hand-spun string is then threaded through the wig to pull the ends of the hair into the desired curved shapes and then knotted off on the inside. Further hair is poked and prodded into the matrix to hide the support string. The wigs are then coloured with a hand-ground, red ochre pigment.

Contemporary wigmakers of the Huli continue to make and wear wigs in line with customary body adornment, ensuring the continuation of this remarkable tradition.

The mandá hàre is just one of several feathered wigs and headdresses from the collection we conserved recently. Treatments involved the stabilisation of pigments where possible, repairing structural weakness in plant-fibre elements and the cleaning and repair of feathers and skins that had been affected by insects. Most important of all was providing good supports for display and storage as movement results in small amounts of hair loss. You can see these striking objects for yourself in the exhibition Plumes and pearlshells: art of the New Guinea highlands.