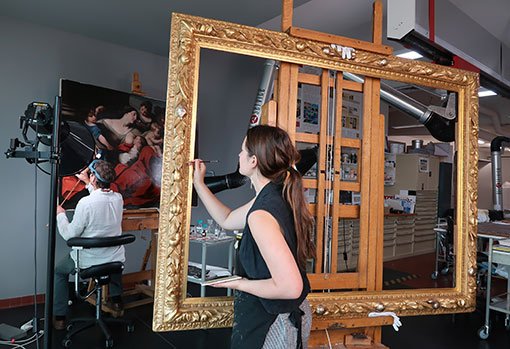 One of the Gallery’s most important old masters is back on display in the grand courts following an extensive conservation treatment of both the painting and its magnificent frame, supported by Manny and Gail Pohl and their generous donation from the Pohl Foundation.

Carlo Cignani (1628–1719) was the most renowned painter of the late 17th century in the Italian city of Bologna, where he maintained a flourishing workshop in the 1660s and 1670s.

The workshop employed many assistants to carry out large-scale commissions and also produced replicas of Cignani’s own compositions, of which the Art Gallery of NSW’s The five senses is a fine example.

There are at least ten known versions of The five senses, copied from an original painted by Cignani on commission for Cardinal Lazzaro Pallavicini in the 1670s and still in in the Pallavicini collection in Rome today. Other versions include a painting that used to be in the Sanssouci Palace Picture Gallery, which is today listed on the German Lost Art Database.

The Gallery’s replica contains more of the ‘autograph’ composition than many of the later versions and its quality distinguishes it from most of them. 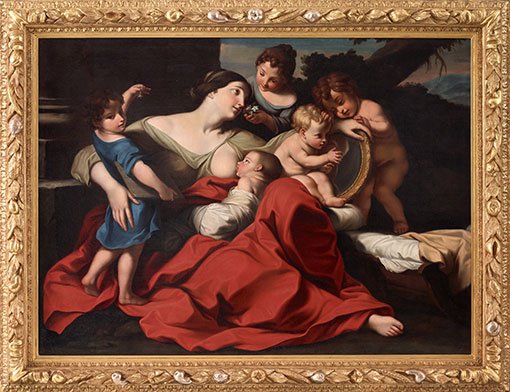 The subject of the painting is an allegory of Charity, but the children also represent the five senses: holding a bell (hearing), suckling (taste), holding a posy of flowers (smell), looking in a mirror (sight) and touching the woman’s hand (touch).

The frame for this work – which has been described as the ‘queen’ of the Gallery’s frames collection – is an extraordinary example of 17th-century craft.

Baroque frames needed to be powerful enough for the richly coloured, dramatic and sensual paintings they contained.

Although not typical of the baroque (it lacks prominent corner and centre ornaments, and also references past frame styles including mannerism and tondo), the frame for The five senses captures the heart of the form. It celebrates sculptural energy, theatricality and colour, and the deep relief carving dramatises light and shade (all principal features of the baroque).

Most importantly, however, the frame directly relates to the thematic content of the painting. The voluptuous fruits and bountiful vegetables in the main carving evoke the senses of touch, taste and smell, while simultaneously richly mirroring the theme of fertility and life as symbolised by the central female figure. 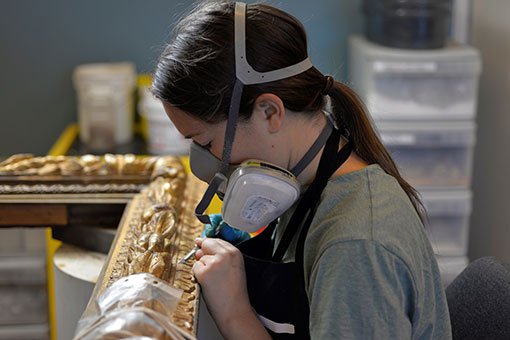 Over time, however, the fullness of this relationship had become hidden beneath layers of non-original materials. A recent cross-section examination of microscopic frame samples revealed that the original gilded surface had been overgilded and overpainted several times to try to hide centuries of wear and tear. Not only was this obscuring the original finish, but these ten layers of varied materials clogged the definition of the ornament. It was therefore decided that all these secondary layers would be removed to reveal the original baroque gilding as part of our conservation treatment.

After a series of solvent and gel tests, we decided the best way to remove the layers was to soak the surface in a poultice of acetone for 30 minutes then shave away the material using a scalpel, thus preventing damage to the original gilding, which was found to be in remarkably good condition.

During the clean we were surprised to discover that some of the fruits were originally gilt with a white metal, which was confirmed using x-ray fluorescence to be silver leaf. This intermingling of silver and gold leaf was an exciting revelation as it is a relatively uncommon finish, although also used on some other frames from a similar period.

Removal of the overpaint revealed areas of surface and structural loss, which we filled with an acrylic paste, then carved or sanded to replicate the surrounding ornaments. The fills were then toned using multiple layers of watercolour to match the original foundation layers of red bole (a clay material used in preparation for traditional water gilding).

All of these areas were then gilded using non-traditional methods, so that they are chemically different from the original and therefore can be distinguished by conservators and other experts in the future.

Moon gold leaf (a white metal leaf alloy of gold, silver and palladium) was used to imitate the silver gilded sections, as silver leaf is known to tarnish and darken over time. Ornaments that would have originally been shiny were burnished using an agate stone.

At this point, the new in-gilding was very bright and different in tone to the 350-year-old gold, so ethanol, steel wool, pigment, ormolu and other materials were used to tone down and distress these areas to match the original surface.

Small areas of loss were in-painted with mica powders in gum Arabic. We use mica powders a lot in frames conservation because the mineral flakes are coated with a thin layer of a metallic oxide, which mimics the reflective qualities of gold leaf as well as being resistant to tarnishing over time. Finally, the frame was coated in a thin layer of matte varnish to protect the very sensitive gold leaf during handling. 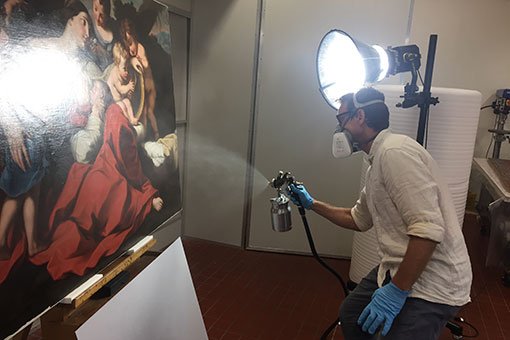 While conservation work took place on the frame, the painting itself also needed attention.

A discoloured varnish coating had turned Cignani’s blues green and the whites a yellowy brown and darkened the whole painting, resulting in muted tones. Cupping and flaking paint was evident across the painting’s surface – the most visible effect of an incident in which the artwork at some point had become wet and suffered extensive paint loss. Abrasion from over-cleaning affected the paintwork, and there was also a curious spotting, which seems to have been caused by the formation of compounds known as ‘metal soaps’ within the paint film (a common problem in oil paintings). Three significant tears and an expanse of non-original overpaint rounded off the audit of damage.

The blue pigment was tested and found to be restorer’s indigo covering the original natural ultramarine, which had been ground from lapis lazuli (a semi-precious stone that was once prized by painters more than gold).

Our treatment began by dissolving the varnish and overpaint in solvent applied with cotton swabs. After ‘looming up’ the painting on a wooden frame, the cupping was flattened using heat and moisture on a vacuum table. After re-stretching the canvas, the missing parts of the composition were reconstructed using reversible retouching pigments. Finally, a varnish of MS2A (a special type of resin) was applied by brush and then as a spray to fully saturate the colours.

Restoration has revealed much greater quality in the painting than had previously been visible. The painting is now thought, in the central areas, to be by the hand of the master Cignani himself, with the composition completed by his skilful workshop.

You can view a slideshow of photos of the conservation process, starting with the work before treatment – click on one of the small images to begin. 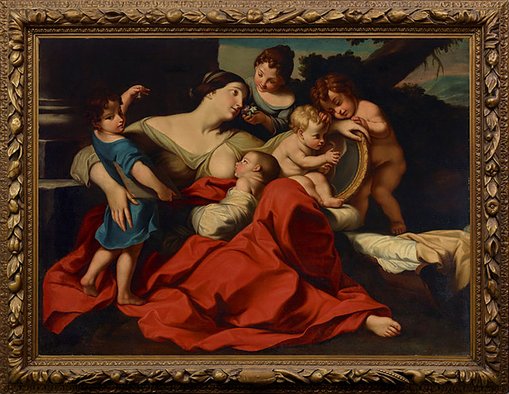 The work before conservation treatment

The overpaint layers on the surface of the frame had oxidised and become dark, making the frame look flat and dull.

An x-ray of the frame shows the internal construction, including the nails and tacks used to attach the ornaments.

A cross-section of the frame shows the original gilding and the many non-original layers that have been applied later.

To soften the non-original layers, acetone-soaked poultices were applied to the frame’s surface and covered with plastic to prevent evaporation.

The softened non-original layers were shaved away using a scalpel.

The original gilding was revealed after the non-original layers were removed.

A lovely section of silver gilt was revealed, preserved at the base of one of the ornaments. The rest, however, had oxidised and darkened.

The fills were carved with a scalpel to replicate the original ornaments.

The fills were toned using watercolour to mimic the original foundation layers.

The new in-gilding was very shiny when first applied.

After distressing, the in-gilded sections more closely matched the original.

A view of the painting under ultra-violet light shows the fluorescing aged natural resin coat and absorbent (dark) old retouchings.

An x-ray of the painting shows the lead white painted areas, the wooden stretcher bars and nails, and the areas of paint loss from flaking and tears.

An x-ray fluorescence (XRF) gun was used to analyse the pigment of the blue cloak.

The effect of the discoloured varnish layer on the original colours became evident as the varnish was removed.

Cupping of the paint surface was flattened on a vacuum table.

This photo shows some of the missing parts of the composition under reconstruction.

The work after conservation treatment