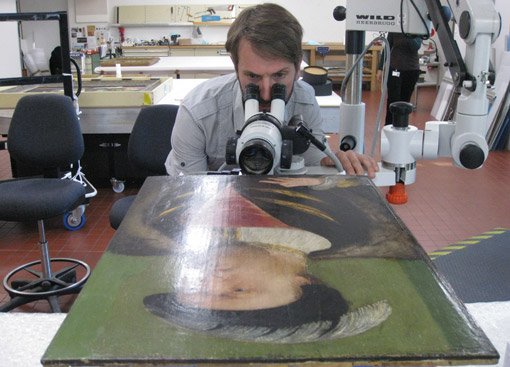 It’s truly extraordinary how much information there is locked within a piece of wood.

To help unlock the secrets of the Art Gallery of NSW’s Henry VIII portrait, which is painted on an oak panel, we turned to dendrochronology or tree-ring dating.

Oak trees produce annual growth rings comprised of bands of water-conducting vessels. The thickness of the rings is representative of historical rainfall patterns. By careful measurement, a piece of oak can potentially be dated by comparison with wood chronologies compiled from oak samples of known age.

For this project, we called on the expertise of Australian National University scientist Dr Matthew Brookhouse. This view of the Henry VIII painting shows (from top) the paint layer, the oak panel, wax/resin adhesive below and balsa wood backing. The water-conducting vessels of the growth rings can be seen running vertically.

Unable to achieve enough accuracy from the damaged exposed ends of the panel, he used a synchrotron image of the panel’s wood grain. This is the first time anywhere that wood has been dated by this means.

The most significant match was found to date the last measurable ring to 1480. Adding in the lost sapwood rings (20-40 years), the earliest possible felling date for the tree that would eventually yield our panel was somewhere between 1500 and 1520.

And in a jaw-dropping piece of detail, he could also establish that it came from an area in the south-eastern corner of England around Sussex, although it is still to be established whether our tree was growing on a ridgeline rather than the valley floor! 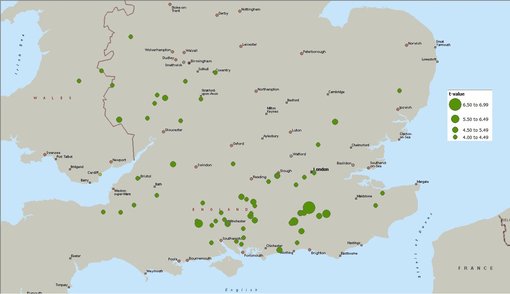 This remarkable result is almost identical to that for the Henry VIII panel in London’s Society of Antiquaries, which our portrait closely resembles, and provides another piece in the puzzle surrounding the painting’s creation.

In the next Henry VIII post, we’ll see how our conservators used the fruits of this research in the restoration of our painting.

The Gallery’s Henry VIII portrait is on display from 12 May to 9 September 2018 in Henry VR.