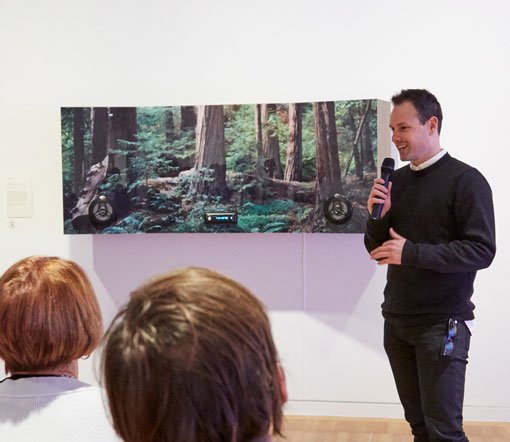 Grant Stevens with his work The way 2007

The Gallery’s collection work The way 2007 by Sydney-based artist Grant Stevens is currently on display in Out of the ordinary: works from the ARTAND Emerging Artist Collection.

The exhibition presents works by Australian and New Zealand contemporary artists who engage with everyday materials and imagery in surprising and transformative ways. Each work was created in the early stages of the artist’s career and demonstrates a keen spirit of experimentation, while also illuminating the direction and development of the artists’ current practice.

Working across video, photography, printmaking and installation, Grant Stevens is perhaps best known for his text-based works that mine sources such as film, television and the internet to explore how the language of contemporary screen culture shapes our individual experience of the world. His body of work is also underpinned by an interest in understanding how we construct and communicate our experiences, something that is evident in his work The way, where he has sought to give material form to a particular memory.

Your work The way came out of a road trip you took along the west coast of America in 2007. Why did this trip prove to be a particularly enriching experience for you?

I was in Los Angeles in early 2007 for an Australia Council residency at 18th Street Arts Centre in Santa Monica. It was my first time in the USA and a West Coast road trip seemed like a pretty appropriate thing to do. My studio neighbour at 18th Street was Diego Teo, an artist based in Mexico City. We didn’t share much language (his English was far better than my non-existent Spanish), and for about 10 days we drove from Los Angeles through Big Sur, San Francisco, across the desert to Salt Lake City, Las Vegas, and then back to LA.

Thinking back to it now, what stands out is the extent to which the experience seemed to fit with my expectations and assumptions about that part of the United States. In a way, I was prepared for it to not look and feel and sound like the versions of ‘California’ or the ‘West Coast’ that years of watching American popular culture had conditioned me for. But those highways, towns, and landscapes along the way were strangely familiar but new to me. When I was driving through Malibu, for example, I suddenly realised that this was where the episodes of M*A*S*H were shot. I had imagined this place as Korea (where M*A*S*H is set), but of course, it’s California.

Big Sur was also interesting in this way. It’s a kind of mythical place, featured so often in representations of California, revered for its role in the counterculture and beat movements, and synonymous with those forms of West Coast spiritualism and self-help culture that are so pervasive today. So, I was prepared to be slightly underwhelmed; for it to be a kind of parody of itself. But Big Sur is epic and beautiful and overwhelming, both because of, and despite of, its familiarity through clichés and representations in popular culture. So, in this work, I wanted to make something that encapsulated the experiences of the residency and these encounters with places during that road trip.

Did you take the photograph during this trip?

No. The idea for this work occurred to me after that residency, when I was in Europe and, then, back in Sydney preparing for an exhibition at Gallery Barry Keldoulis. The idea came up because I kept thinking about these landscapes, and the way that Diego and I experienced them through the ‘screen’ of the car window — hence the articulated shape of photograph/sculpture, and the car stereo that features in the work. I ended up travelling back to California a few months later and shot this photo on a camping trip in Big Sur with another artist, Rosha Yaghmai. She’s a really great artist, and she helped me take the photo. It was shot specifically with this sculptural form in mind.

The work takes a three-paneled form with the two outer panels slightly fanning inwards, quoting the structure of an altarpiece. Is there a spiritual element to this work?

Yes, as I mentioned, the form of the work takes some cues from car windscreens, but also, in a way, from religious triptychs. There is a spiritual reference in there, in this triptych form as well as in the combination of the image and soundtrack. I wanted the object to evoke a kind of reverential mode of looking and contemplating.

The title – The way – also plays into this sense of reverence.

The title refers to a journey or path towards something unnamed – potentially some kind of spiritual enlightenment. Big Sur is obviously an important place in the development of Western (or American) self-help cultures. I wanted this work to evoke a kind of self-conscious reverence, drawing on the visual languages of West Coast spiritualism, and merging it with furniture and interior design. I grew up with a religious education, as well as an art school education that taught me to become attentive to stereotypes, conventions, and how ideologies manifest in culture. So, I’m curious about the possibilities for spiritual quests for meaning now, particularly in the contexts of developed capitalist societies that, on the one hand, seem antithetical to quiet contemplation and introspection, and yet, on the other hand, are fully geared to the self-actualisation of the individual through relentless messages and schemes for self-improvement.

You mention you were also looking at furniture design — does this explains the wood veneer?

I’d seen Richard Artschwager’s work for the first time at SFMOMA on that same road trip. He worked for a long time making sculptural forms using timber veneer, and the work at SFMOMA was a wall-mounted sculpture using a similar triptych form. I was so confused by his work, and I wanted to make something in response to that confusion. When I got back to Sydney, I spent a lot of time looking at furniture and interior design, and thinking about how timber and veneer are used to evoke a sense of the natural environment. At a time when our interiors are becoming increasingly technologised, I was thinking about the concurrent return of natural forms and materials in interior design. So, the work that resulted is deliberately hybrid in its form: it’s not really a photograph, not really a sculpture, not really a sound work, but a combination of all of those things.

Yes, you certainly create an interaction between image and sound that doesn’t sit comfortably or, maybe, expectantly is the better word.

On the road trip, Diego and I had a lot of time to think — as I said, we shared little common language. Diego also didn’t drive, so I drove all of those miles looking out the windscreen, experiencing the landscape through the interface of the car. We listened to a lot of music.

This work was also the first time I had used a photographic image in my work. Until this point, I had mostly been making videos using text and sound. I was quite resistant, and even scared, to use photographs in my work, as the thought of having a static image seemed antithetical to the ideas I’d been working with. So, I really wanted to find a way to destabilise the fixedness of the image, and to give it temporality. The discomfort that you mention is a deliberate attempt to do something beyond the static image.

Can you tell us a little but more about the music you have recorded for the work; what drew you to the very particular distorted, drifting electric guitar sound?

The residency and the road trip were also an education in the legacies of The California Sound — those fusions of surf, folk, country, desert, classic rock, psychedelic, and soft rock. Driving around LA with the radio on seemed to make Fleetwood Mac site-specific.

I wanted this work to have a guitar soundtrack that wasn’t easy to place. I’d been listening to Neil Young a lot and there were some ‘spatial’ guitar elements that I wanted this work to respond to. So, back in Sydney, I commissioned Rex Goh (Air Supply, QED, all-round excellent guitarist) to record the soundtrack specifically for the work. I took him a range of songs and samples and discussed the atmosphere I wanted the work to evoke, and he translated all this into the recorded track. It was a really great experience to work with Rex; he’s super talented, and I was really happy with the result.

I wonder looking back at The way, ten years on, does the work mark a ‘moment in time’ for you?

Yes, it does feel like a particular moment. It was the first time I’d used a still image in my work; the first time I’d commissioned a soundtrack. It was the first time I’d made a stereo or an object… Making the work involved lots of different processes and production methods, which were all new to me, and I needed a lot of help to follow up on each step. This really helped me shift my practice and open up new possibilities and ways of working. I can also see the benefits of that residency clearly now; it continues to influence my work today. So, a big thanks to the Australia Council and to ARTAND Australia for acquiring the work at the time. The work was a leap for me, and it was amazing to be supported and encouraged in this way.

Next post: Admired by Tom Roberts and Van Gogh

October 11 2017, 9am
by Lisa Catt
Assistant curator of international art