Art on the farm 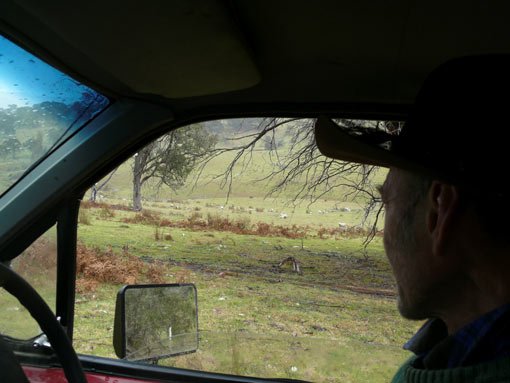 Ross Laurie in the ute at Ram’s Gully, Walcha

Artist Ross Laurie and his family live on beef and sheep country at Walcha, on the Northern Tablelands of NSW between Tamworth and Armidale. He has worked his property (farmed by his father before him) for most of his adult life, apart from a few years living in Sydney and London, where he studied art.

I’d been to Tamworth once or twice, and Armidale a few times – mostly to visit the New England Regional Art Museum, which houses the extraordinary Howard Hinton collection of Australian paintings from the 1880s to 1940s – but I’d never ventured much into the country beyond until I went there in spring last year as part of my planning for the inaugural Dobell Australian Drawing Biennial exhibition – Drawing out.

On the morning of my first day, I sat on the terrace of the local cafe on the wide main street (where pretty much everybody seemed to stop for a coffee), watching the leisurely flow of dusty utes and 4WDs, cattle trucks and the occasional emergency vehicle pass by. The local economy is dependent on the rich agricultural land of the region, but unlike other rural towns I have known, the streets of Walcha are saturated with art. The local gallery had some great pictures for sale and there was public sculpture everywhere, scattered through the town’s streets and along the river – over 40 works by local and international artists, and counting, in the Walcha open-air gallery. This was clearly a region with creative citizens and a solid commitment to art!

Laurie’s farm is a short drive out of town through scrubby bush punctuated by the occasional gated dirt track, decked with a large mailbox and property name. Once off the road, you could be a million miles from anywhere – there are no signs of neighbours, just miles of hills stretching out west, with clumps of trees and swathes of grassland, dotted with sheep and cattle. That night, comfortably ensconced in the farmhouse by the fire chatting about art and books and children, we were startled by a loud clatter of hooves on the wooden porch outside; an orphaned calf had escaped his temporary sanctuary by the vegetable garden, looking for company on the cold night. It was inky black beyond the front steps, but looking up, the stars reached infinity.

The next day proved a revelation. Ross and I set out in his battered ute across the grass, making our way slowly over the rough tracks and open terrain of the farm. Laurie knows the land intimately; as we drove, he pointed out groves of exotic trees from the days of his father’s stewardship and more recent groves of native species planted to support biodiversity and sustainability of the land. The countryside was green, belying the fact that it was in fact still in drought. During my stay, Laurie’s wife Myf – a talented ceramicist and artist – performed daily duty as a modern shepherdess (albeit one that reads novels in the front seat of her car) as she presided over the cattle wandering along the roadsides to feed.

As the ute reached higher ground, the plants changed, and everywhere I looked around in the landscape I began to recognise forms and colours from Laurie’s drawings and paintings. Watching the clouds and bursts of welcome rain approach in the quiet, broken only by the occasional birdcall or bovine bellow, was a calming, immensely satisfying experience and one that made perfect sense of his art.

My visit to Walcha – and to the Dandenongs to see artist Mary Tonkin – gave me pause in my busy life. Away from my familiar surroundings and the humdrum of everyday routines, I was forced to slow down and take in new scenes and a completely different pace of life, with its own pressures and pleasures. Most of all, my time on these farms underlined the importance of place for the artists whose bonds with the land, forged over a lifetime, are inextricably intertwined with their art. It was both a privilege and a delight to witness, albeit for the briefest time.

For a slideshow of photos from the Walcha visit, click on one of the small images to begin… 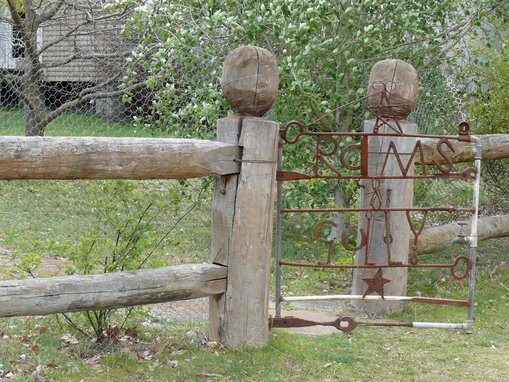 The gate at Ram’s Gully, Walcha.

View of the garden at Ram’s Gully.

Laurie lives on a working farm, raising cattle as well as practising as an artist.

View from the front gate, looking west. The scudding clouds made the light on the hills change from moment to moment.

Charcoal landscape drawings made at Ram’s Gully. Laurie sometimes goes out to draw views of the landscape as a way of seeing it anew.

Inside Ross’s studio, with his Walcha series in progress.

Inside Ross’s studio, with his Walcha series in progress.

You might also like to watch video interviews with some of the Drawing out artists in their studios and in the landscape on the Gallery channel.