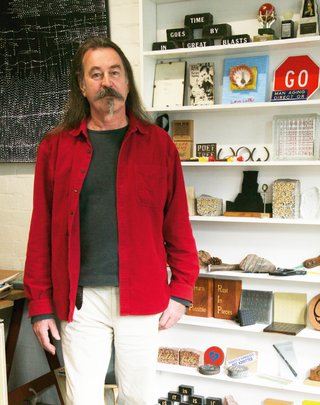 In The art that made me, artists discuss works in the Art Gallery of NSW collection that either inspire, influence or simply delight them. This selection by Richard Tipping first appeared in Look – the Gallery’s members magazine.

Richard Tipping is known as both a poet and artist. His artwork often bridges text and image, from large public sculptures to photographs, prints of concrete poetry and 'artsigns' such as Jump start, displayed in the 2016 Sulman Prize. In 1988 his word work Imaginaction was installed across the entire front of the AGNSW, while his exhibition Multiple pleasures was held in the entrance court in 1996. The Gallery recently acquired several works in Tipping’s 'roadsigned' series, and commissioned the remaking of his lost sculpture Safe art, newly engraved and titled Unsafe art. See artgallery.nsw.gov.au/collection/works/?artist_id=richard-tipping

'Words are sonic magic,' he says, 'creating our minds through meaningful sounds. I want to give sculptural weight to language, even if it means bringing poetic speech into the gallery one word at a time.' Or as the New York Times once put it: 'Tipping’s wordplay sneakily interrupts our everyday habits of perception and cognition to mentally tonic effect.' 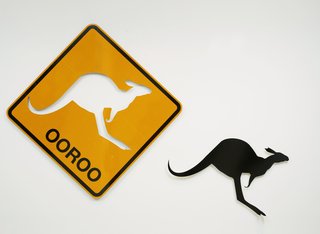 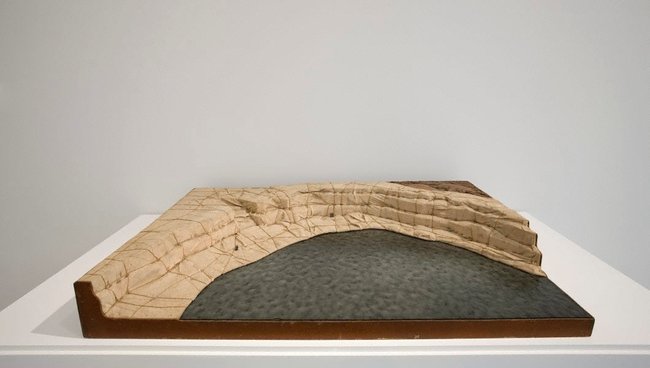 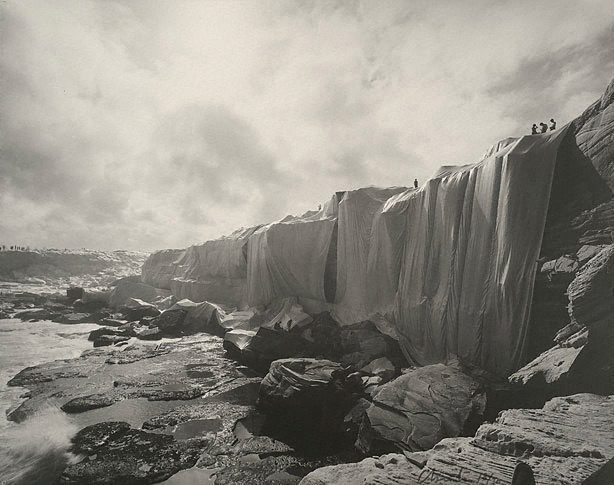 In 1969 I was 19 and lived for the year in Sydney, taking a break from university in my hometown of Adelaide. Up close I experienced the vast cloth of Wrapped coast puffing and buckling in the wind while slowly being tied down. The daring of its conception, and the extraordinary feat of its installation -­ literally transforming the littoral zone of sea-cliffs into an intermediate space between states of being hidden and revealed – thrilled me as a temporary intervention in the landscape. Twelve years later in 1981, while proposing a lightwork to be suspended across the Harbour Bridge, the bridge engineer said – as we climbed the arch of the bridge: 'I’ll say to you what I said to Christo: "no way!"'. But that’s another story.

Although the AGNSW has excellent photographs of Wrapped Coast, I particularly like this maquette: a conceptual sculpture made as a preparatory object. Inspired by these ideas of cloth and scale, nineteen years later in 1988 my wordwork Imaginaction enlivened the façade of the Gallery for six months. 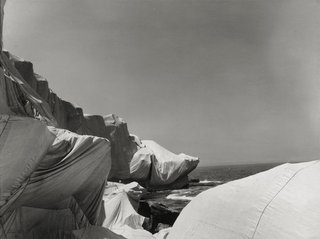 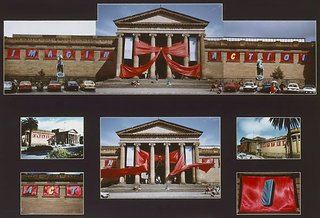 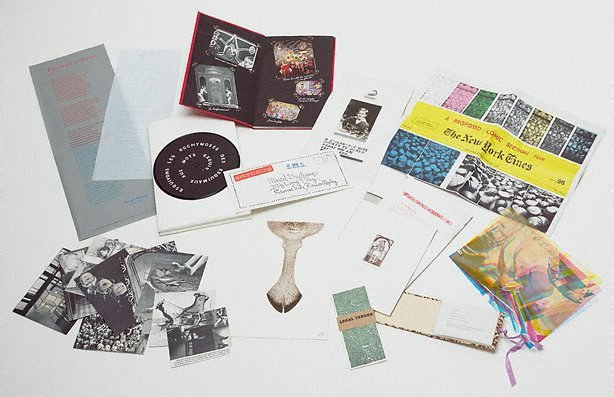 Photographs of Wrapped coast were included in the provocative exhibition Ideas and actions: performance, process and documentation, which I saw at the Gallery in 1999. Also featured were issues of William Copley’s extraordinary magazine SMS (Shit must stop, 1968). First seeing the enclosed artworks was like being suddenly connected to the living past through an electric charge. For example, SMS #2 includes Meret Oppenheim’s surreal drawing The mirror and Marcel Duchamp’s Remove to play, a 45rpm record featuring the optical experiment of spinning text: 'Dodge the bruises of Eskimos with exquisite words'. Other favourite artists in the six issues of SMS include Christo, Roy Lichtenstein, John Cage, Yoko Ono, Claus Oldenberg, Richard Hamilton and Lawrence Weiner. The AGNSW holds two versions of the folio: one preserved for exhibition, and another available to members of the public in the study room, through appointment in advance. 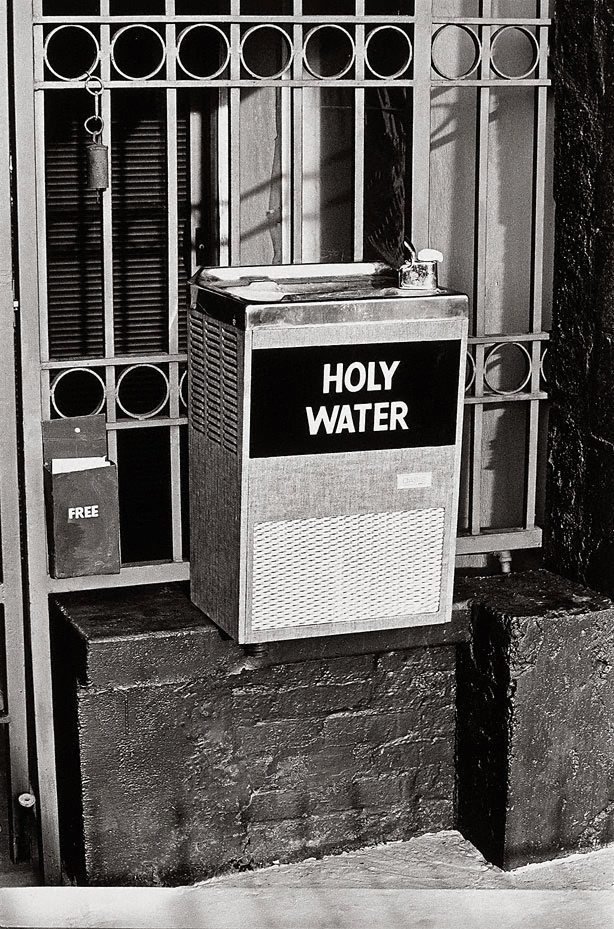 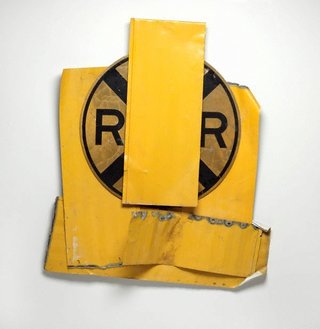 Photography is one of my deep loves. How to reconcile the necessary flatness of photography with an equally deep love for in-your-face sculpture? The Gallery has an excellent collection of works by Robert Rauschenberg who made both, and more. No 4 Los Angeles presents us with the possibility of Holy Water, offered through a standard drinking fountain. The flat humour of this documentary observation tickles me as it raises questions of faith and credulity. Following my book of photographs Signs of Australia (Penguin, 1982), I hoped to integrate some of my own ambiguous takes on public signage in the USA with that of American photographers and artists to make a new book, Signs of America. Rauschenberg was immediately and generously interested, sending eight photographs. I still haven’t cashed his signed cheque for $5 for return postage, and (with agreement from all of the contributors) the whole would-be book’s substantial manuscript is held in the Gallery’s Research Library and Archive. This is available for inspection by members of the public through appointment in advance. 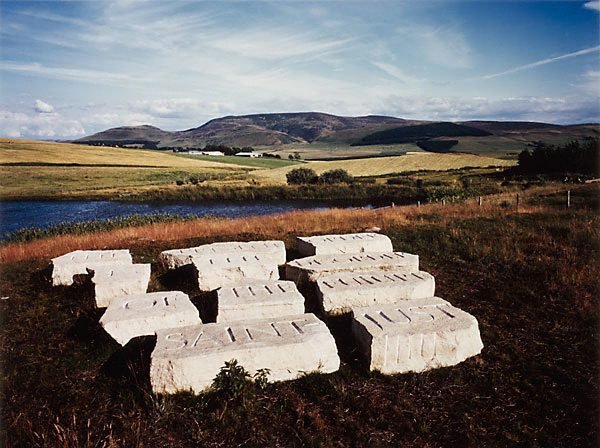 The AGNSW holds six of the Scottish poet/artist Ian Hamilton Finlay’s Talismans and signifiers 1984, which are engraved marble cubes. However, these have not yet been photographed and so cannot be shown here. In his book on Finlay, Yves Abrioux says: 'they are lying in ambush for the unsuspecting visitor, not only smooth and aesthetically pleasing talismans of stone, but signifiers communicating a telepathic message of didactic classicism.'

A prolific self-publisher, Finlay (1928-2006) was an instigator of the concrete poetry movement in the early 1960s, and produced typographic works as well as inscribed stone sculpture which continue to draw my attention. The Gallery has a folio of 20 photographic prints showing aspects of his famous garden Stonypath close to Edinburgh, with sculptures placed strategically in the landscape. For example, large blocks of inscribed granite scatted like a ruin carry a quotation from Louie Saint-Just, a controversial ideologue of the French Revolution and advocate of the Reign of Terror: 'The Present Order is the Disorder of the Future'. Typically, meaning resonates into a multiplicity of possibilities. Finlay’s oeuvre is complex, repaying study. 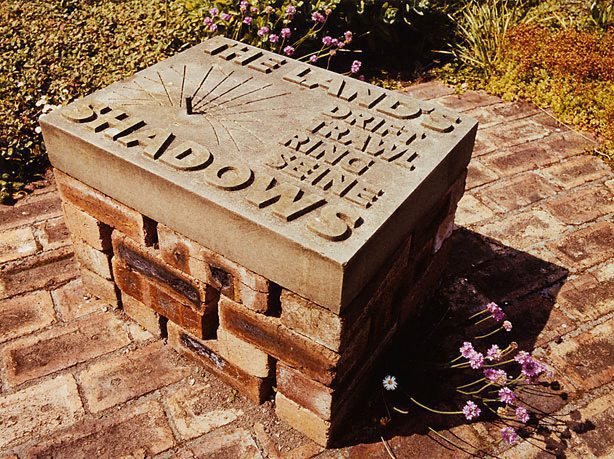