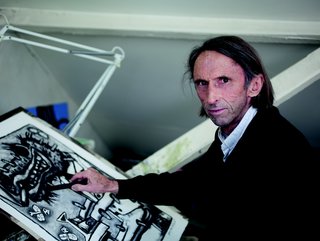 In The art that made me, artists discuss works in the Art Gallery of NSW collection that either inspire, influence or simply delight them. This selection by Reg Mombassa first appeared in Look – the Gallery’s members magazine.

I first visited the Art Gallery of New South Wales shortly after arriving from New Zealand as a spotty 17-year-old and have loved the Gallery since that time, becoming familiar with many of the pictures that have been on more or less permanent display. Lloyd Rees, Brett Whiteley, Peter Booth and Richard Larter have all been inspirational.

The survey shows and international blockbusters have also been of great interest, particularly the Picasso show, the Nolan retrospective, the Otto Dix Great War etchings and the Papunya Tula show. Traditional Indigenous art and culture is arguably the only truly original art style that has been created in Australia. For all the brilliance of the white mainstream artists of the previous 200 years, the styles, methods, themes and movements they utilised or followed originated in Europe and the USA, and to a much lesser extent, Asia. Their pictures are modified and local versions of these European approaches. This is a vague and personal meander through the collections. 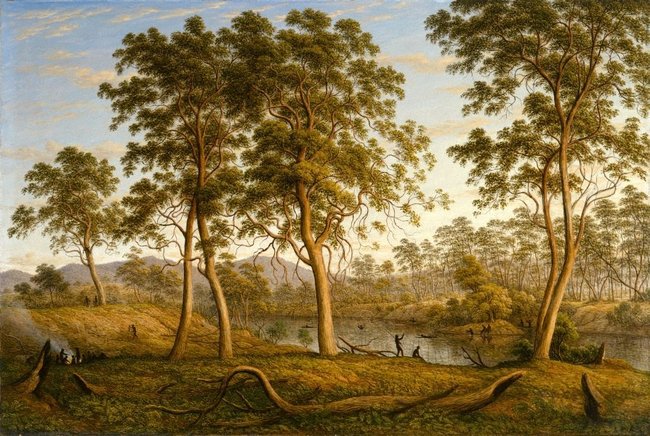 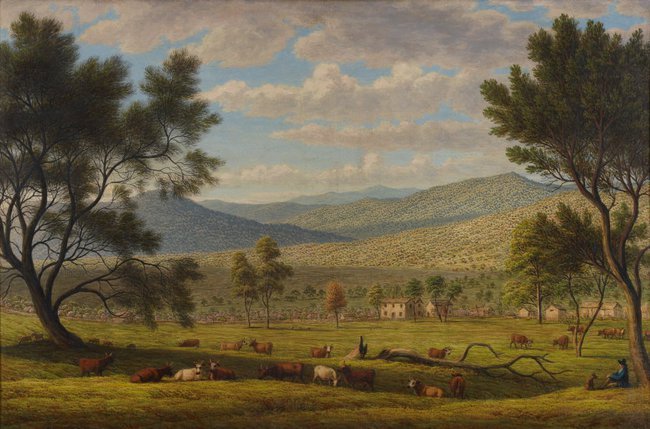 John Glover is my favourite of the early colonial painters. His bucolic Arcadian fantasies, usually drenched in golden late-afternoon light, have a mannered and slightly naive folk art quality to them, in spite of the sophistication of his painterly skills. These qualities, coupled with the glowing colours of his pictures, raises them above the brown gloom and melodramatic sentimentality of much of the Victorian period – particularly the epic and somewhat ridiculous reconstructions of Greek myths and scenes from the bible. Two good examples of his work are Natives on the Ouse River, Van Diemen’s Land 1838 and Patterdale farm c1840.

The peaceful charm of these pictures, and the ostensibly happy natives often depicted, is somewhat incongruous when you consider that brutalised convicts were devouring their fellow convicts and the Indigenous people were being slaughtered in a sputtering war of extermination around this time in Tasmania. 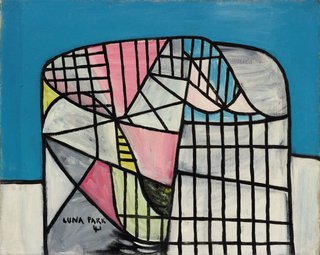 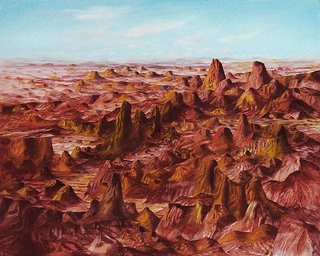 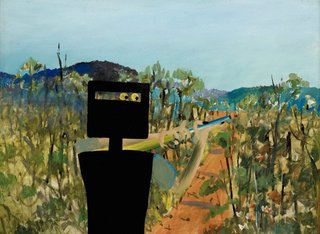 In the modern era my favourite Australian artist is Sid Nolan. He had an astonishing output and variety of painting styles and themes. The early Kelly series would stand up if you took out the bandits, policemen and horses and left just the landscapes. The swiftly painted thinly applied enamel on masonite look of them has great appeal as I like shiny things.

His early desert paintings are also highly attractive. In a relatively short time he seemed to be effortlessly switching from the almost complete abstraction of Luna Park 1941 to the deliberately clumsy modernist figuration of the Kelly series and the sleek sophistication of desert paintings like Central Australia 1950 and Drought skeleton 1953, and then on to the smeared ethereal gums of Policeman floating in the river 1964.

It may be a cliché to say his earlier work was better but, along with the recordings of the Rolling Stones, I do actually prefer Nolan’s earlier work. You can admire his energy and brave experimentation but I find much of his later work visually unattractive and slickly repetitive. 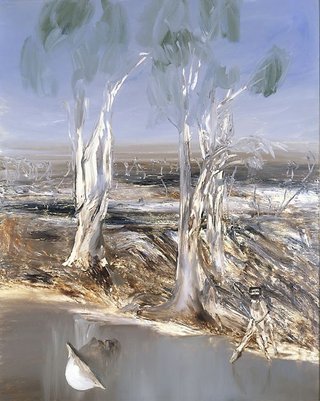 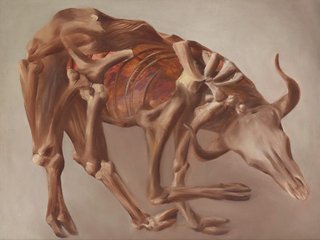 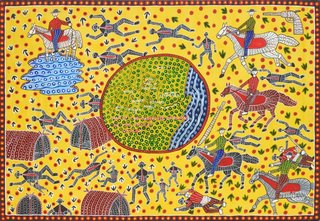 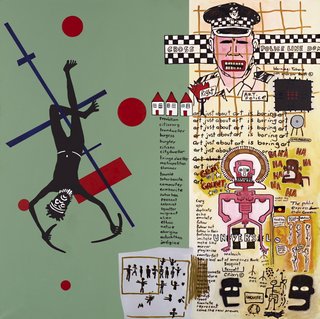 The Gallery’s Indigenous collection has an impressive selection, ranging from the highly graphic and delicate line and dot work of the traditional bark paintings and totems through the acrylic on canvas renderings of these ancient styles and onto the contemporary Indigenous artists who blend their traditional elements with current global art forms.

Of the recent Indigenous artists my favourite is Robert Campbell Jnr, a good example of his work being Map of the massacres of blacks on the Macleay Valley 1991. Other outstanding works in this collection for me are Gordon Bennett’s Notes to Basquiat 1999, Richard Bell’s Devine Inspiration 1993 and Trevor Nickoll’s Homage to Margaret Preston 1988.

The well-justified anger and irritation over the treatment of their people gives these modern Indigenous artists an energy and purpose that is sometimes lacking in their mainstream contemporaries. 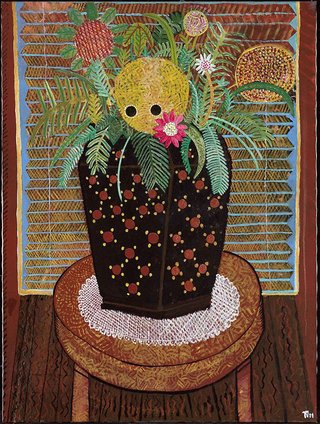 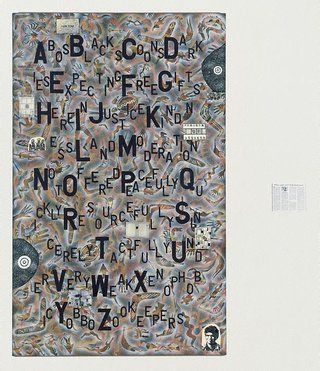 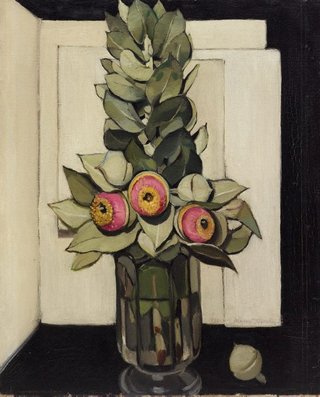 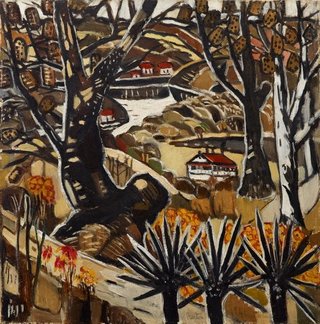 I taught myself to paint as a teenager by copying the European impressionists, so the Australian impressionists are of particular interest. The works of Streeton, Roberts and Conder are standouts from this period.

Moving into the 20th century we encounter Margaret Preston, one of my favourite Australian artists. The Gallery has a solid collection of her beautifully composed still lives and landscapes with their elegantly muted colours and graphic art deco references. Western Australian gum blossom 1928 and I lived at Berowra 1941 are two excellent examples of her work.

Another favourite of mine from around this time is William Dobell’s The boy at the basin 1932, a small tightly painted and composed relatively traditional rendition, considering the mannered distortions of his later pictures. The boy’s pyjamas, the white enamel basin and the milk bottle and kettle are beautifully painted. 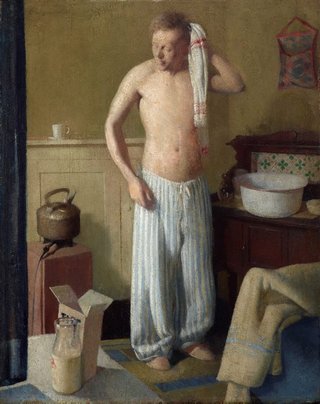 AGNSW collection William Dobell The boy at the basin 1932