Discover juicy facts and queer stories behind the artworks, artists and their subjects in this tour created as part of Queer Art After Hours at the Gallery on 26 February 2020. 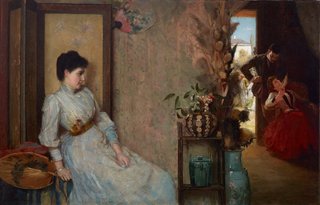 The Melbourne journal Table Talk described the subject of Tom Roberts’s Jealousy as ‘a young lady seated in a recess, becoming the voluntary or involuntary auditor of a flirtation which is being carried on by a rival round the corner, with the listener’s own lover’. While the critic’s decision not to identify the genders of the ‘rival’ and the ‘lover’ was most certainly heteronormative, it is worth pondering other possibilities. Indeed, the painting’s original title – One, not easily jealous, but, being wrought, perplex’d in the extreme – came from Shakespeare’s Othello, the ‘rival’ being a man, the ‘lover’ a woman. Roberts painted Jealousy in his studio, which was praised by Table Talk as being ‘most picturesquely arranged’ in the fashionable Aesthetic style. The Aesthetic movement, popularised by Oscar Wilde, was embraced by Melbourne’s artists, at least until news of Wilde’s arrest in 1895 reached Collins Street. ‘[Melbourne’s] pawnbrokers absolutely refuse to advance on velvet coats’, observed the Sydney Bulletin in May 1895. Roberts married in 1896, shortly after his 40th birthday. 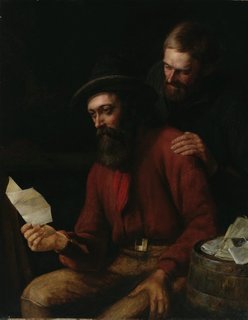 Gold diggers receiving a letter from home, circa 1860

The Australian Gold Rush of the mid to late 1800s provided unexpected opportunities for queer people. Transgender people could begin a new life on the goldfields that was true to their identity. But there were risks. Exposure could come at a heavy cost. This was the case for Edward De Lacy Evans, a young Irishman who arrived in Melbourne in 1856 and mined the Victorian goldfields before settling down as a farm worker near Bendigo. Evans married several times. His ‘somewhat effeminate face and figure’, according to the contemporary press, ‘at times excited comment’, but this was largely dismissed until 1879 when Evans, having broken down over evidence of his wife’s infidelity, was medically examined and his biological gender made public. Although Evans had a brief moment of fame, working on the travelling show circuit in an attempt to raise money to leave Australia, his mental health never recovered from the scandal and he died in Melbourne’s Immigrants’ Home in 1901. 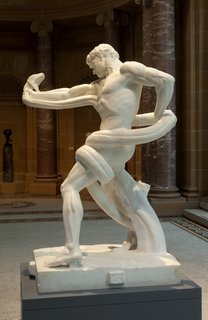 In the golden age of the posed ‘tableau vivant’, an Australian body builder, Clarence Weber, made quite a career from live performances and picture postcards recreating famous statues of athletic male nudes. In 1912, Weber posed for a photograph as Leighton’s Athlete wrestling a python. The image made its way to London where a leading physical culture advocate, Monte Saldo, published it in his book How to pose, identifying it as a photograph of Leighton’s original model. Leighton’s model was, in fact, Angelo Colarossi. Weber wasn’t even born when the original bronze was cast and was a nine-year-old living in a bayside suburb of Melbourne when this marble version was carved. 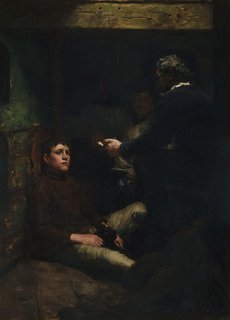 Henry Scott Tuke was a prolific painter of the male figure. An enthusiastic nude bather, he was best known for his paintings of young men frolicking by the Cornish seaside. Based in Falmouth, Tuke painted A sailor’s yarn on board his newly acquired floating studio, an old French brigantine, Julie. This painting was not a popular purchase when acquired by the Gallery in 1889. The press critics thought it as boring as the sailor’s yarn. The Illustrated Sydney News wrote: ‘a work of some merit, and tells its story sufficiently, but it belongs rather to the class of “pot-boilers.” Its technique is good, but it is not altogether satisfactory in expression, and a not inconsiderable proportion of it is sheer padding.’ 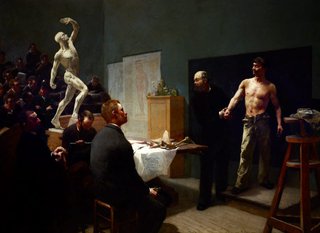 The anatomy class at the École des beaux-arts, 1888

Prominent Sydney artist and teacher Julian Ashton wrote enthusiastically about this painting for the Daily Telegraph: ‘What breadth and simplicity. You don’t need a name for it; you know at once that it is an anatomy class. The great, cold bare room, the rows of students, and the sergent de ville in his cocked hat keeping order. But none of this obtrudes when you look upon the old professor and the subject of the demonstration. You see at once that though the professor has done this over and over again, it still has a fascination for him; he is full of enthusiasm as he demonstrates simply and emphatically the course and attachments of certain muscles, while the subject, used to the scene, complacently allows himself to be handled to illustrate the professor’s remarks. This is what indeed may be called an historical picture.’ 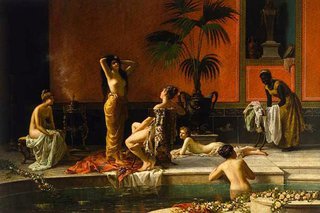 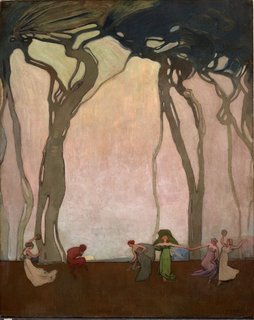 Sydney Long was a man of secrets. We do not know for certain when he was born or who his parents were. Although he married, fellow artist Roy de Maistre disclosed that the two had been lovers. The curator of a major Long exhibition in 2012 suggested that Baron von Gloëdon’s photographs of naked Sicilian boys were the inspiration for Long’s 1894 masterpiece By tranquil waters, his first work to be purchased by the Gallery. Fantasy shows Long’s characteristic decorative approach, harnessing the simplified and sinewy forms of art nouveau. He said that his aim was ‘to express the lonely and primitive feeling of this country. A feeling more suggestive of some melancholy pastoral to be rendered in music’. 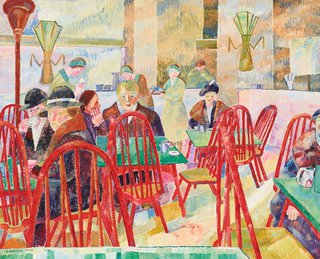 Daniel Thomas, the Gallery’s first curator of Australian art, noted that: ‘Grace Cossington Smith always carried a sketchbook with her in order to capture, at the decisive moment, a subject she might be ‘taken by’. [Here] the sketchbook was called forth by a man. Across her green foreground table-top she noticed opposite her a man with glorious blond hair, a colour to catch the light and to be orchestrated with the golden floor. She sketched as inconspicuously as she could. And then she was caught out. Her blond subject looked up, straight at her — and gave her the colour bonus of his own intense blue eyes. The woman seated talking to the blond is only thinly sketched in paint. It would be most unlike Miss Smith, yet we can’t help wondering whether there was a touch of jealousy in her treatment of the blond stranger’s friend.’

You know, I have never understood the male obsession with lesbianism – a whole area of sex with nothing for them to do. Just answered my own question, haven’t I?’ – Sarah Alexander (as Sally Harper) in Coupling by Steven Moffat.

An interesting choice for a commission for an openly gay man, Five in a row show was painted in 1969 for Frank Watters’s apartment in East Sydney. Among the pop-art clippings of famous women and nude portraits of Richard Larter’s wife Pat, there are a number of clippings from 1960s ‘girlie’ magazines, two of which are very suggestive of lesbian love, albeit a depiction based upon heterosexual male fantasy rather than a genuine experience. 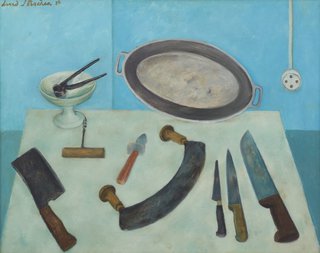 David Strachan’s friend William Salmon recalled that Strachan ‘was a first-class cook because he respected simplicity’. Kitchen implements and the ingredients for dinner feature in a number of his still-life paintings. Strachan’s archive also contains a variety of recipes in both English and French, filed among his notebooks on art history and French grammar, such as this one for salmon fricassé: ‘Take a small tin of red salmon. Melt a dessert spoon of butter in the bottom of a saucepan. Sprinkle into it a similar quantity of flour. Add milk [while] slowly stirring [this] till you have a thick paste. Let it cook for a few minutes, 1 or 2 [minutes]. Then add the salmon, still stirring. Cook for a few minutes. Serve on hot buttered toast or not as preferred – grate a little nutmeg over the result – not too much.’

In 1909, Dora Ohlfsen designed a medal which she titled Femminismo. The Sydney Morning Herald described the image as embodying ‘the wise, fearless, and detached outlook of the modern woman’. The medal was originally made to commemorate the suffragette rally in London in 1908. Ohlfsen, who was born in Ballarat in 1869 but who left Australia permanently in 1886, living most of her life in Rome, was a perfect example of the ‘New Woman’. She met her lifelong partner Elena von Kugelken while she was living in Russia and then forged her artistic career in the male-dominated field of sculpture. Very few of her free-standing bronzes survive. Woman with bear skin is a recent donation to the Gallery. Around 1911 she made three statuettes of the female nude. It is possible that this work is the one known as Dawn.