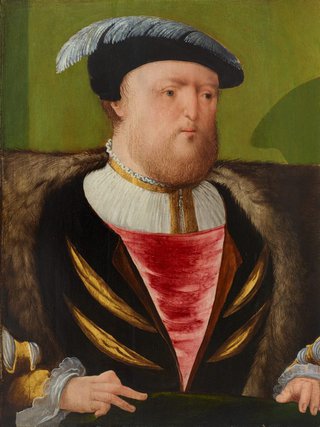 Henry VIII is depicted here in his mid-forties, shortly after he was declared the ‘supreme head’ of the Church of England. His features here appear curiously small – the eyes, nose and mouth are compressed into the middle of his face – and he sports a reddish-brown beard which reportedly ‘looked like gold’. The Tudor king’s massive fur-covered shoulders seem to extend beyond the edges of the panel, exuding a forceful presence that reflects Henry’s desire to present himself as a powerful monarch.

Early 16th-century England saw the rapid development of portraiture and Henry VIII’s likeness was far more widely replicated than that of his predecessors. This portrait is one of a large group of images of the king described as the ‘late non-Holbein pattern’. These works are all similar in general format and portrait but differ in details of the costume and the position of the hands.

Portrait patterns often circulated between artists’ workshops, many of which were active in London and employed both native and Netherlandish or Netherlandish-trained artists. The influence of Netherlandish painting techniques can be seen here in the fine brushstrokes used to depict Henry’s beard and the dabbing method used on the collar of his shirt. 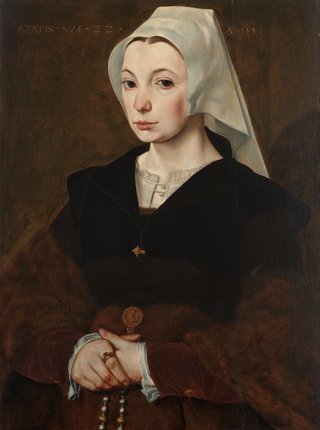 The sitter’s furs and jewellery suggest that she belongs to one of the wealthier strata of middle-class Antwerp society. Her age is given in the Latin inscription at the top as 22 and the date is 1541.

The anonymous artist was a sure draftsman who was able to offer more than an objective statement of appearance. The portrait is tightly composed and surely enough drawn to convey psychological content. Because the oil paint has become more transparent with time, it is possible to see the swift, confident under-drawing with which the artist sketched out the pose directly onto the chalk ground.

The painter was given the name of ‘Master of the 1540s’ by the founding scholar of early Netherlandish painting Max J Friedlaender, who recognised a coherent group of stylistically and technically similar portraits from the mid 1500s, most inscribed with the sitters’ age and date. 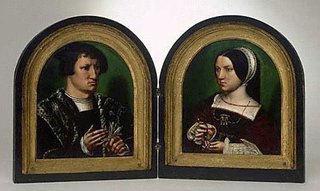 Benson’s portraits are painted in the meticulous technique of the early Flemish school, with a distinctive warm palette. In these immaculately preserved pendant portraits – the only double portrait in this room – the sitters seem as alert to their own interior imaginings as to any dialogue with each other or the external world.

The coats of arms on the backs of the panels identify the sitters as Cornelius de Scheppere, an important scholar and diplomat who travelled extensively in the service of King Christian II of Denmark and later for Emperor Charles V, and his first wife, Elizabeth Donche.

The portraits are the smallest in Benson’s known oeuvre. The present frame is modern, but they may have been similarly mounted as a hinged diptych for ease of storage, transport and display. Arch-topped frames were in vogue for portraits in the Netherlands and elsewhere in northern Europe from the late 15th century. 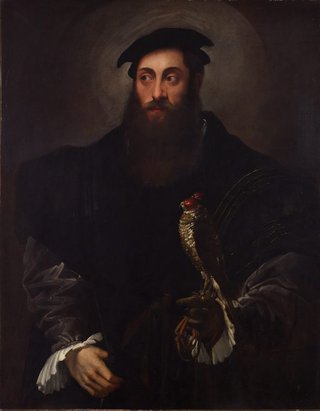 This portrait depicts a North Italian aristocrat whose haughty demeanour is emphasised by his averted gaze. His imposing body completely fills the canvas in a way typical of Italian mannerist portraiture during the 1540s. The art of falconry, indicated here by the tethered bird of prey perched on the sitter’s gloved hand, was a popular sport among the nobility of northern Italy.

Nicolò dell’Abate is best known for the fresco decorations he completed for the French court at Fontainebleau where he moved in 1522. This painting is one of a small group of portraits dating from the period the artist was still working in his native Modena. It is executed on canvas, which increasingly came into use in the first half of the 16th century, particularly for portraits that were to be transported over long distances. 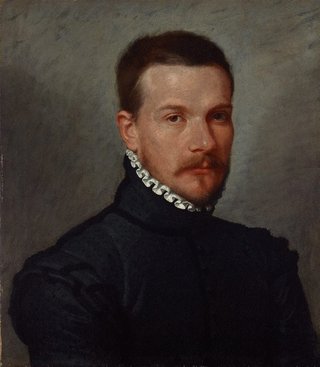 The reclusive Giovanni Moroni lived in the small North Italian town of Albino for most of his life. He was, however, one of the most arresting and innovative Renaissance portrait painters. The intensity of his portraits depends on a precision and simplicity which were a novelty at the time.

The modest scale, bust-length format and lack of suggestive attributes in this portrait are innovative features in Moroni’s work. Though we see only the head and shoulders, there is a tension in the figure which suggests he is standing, perhaps with his hands clasped in front of him. The pose is not relaxed. The light flickering over his features lends them a vibrancy which is not without a shade of anxiety and hence a sense of humanity. Moroni’s image is one of intense naturalism that is a harbinger of 19th-century realism. 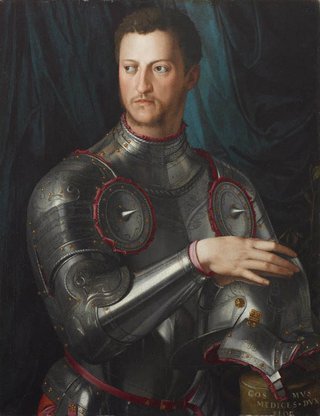 This is one of several portraits produced by Bronzino and his workshop for his patron Cosimo I de’ Medici, Grand Duke of Tuscany. Cosimo belonged to a minor branch of the Medici family and succeeded to the Dukedom only when the main branch was extinguished, a fact alluded to in the bottom right corner inscription. X-radiography shows that the work is painted on top of another quite different portrait, which for some reason the artist abandoned.

Bronzino was one of the most important mannerist painters. His portrait subjects are characterised by an intense concentration with an almost inhuman elegance and steely reserve. This style of rigid aristocratic restraint is one that the artist made his own. Here, the intensity of Cosimo’s impenetrable gaze perhaps betrays a sense of anxiety in the youthful Duke. His extraordinarily detailed armour, with its immaculate shining surface, dominates the composition. 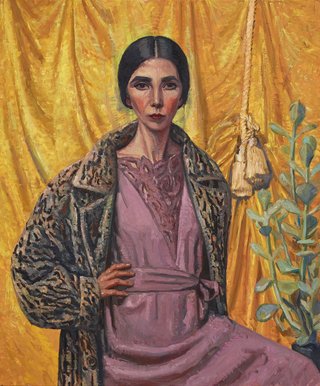