Albert Tucker’s The Intruder (1964) has recently been gifted to the Gallery. The work is not only important as a significant 20th century Australian painting, it also remembers a passionate life of art collecting. Barbara Jools’ gift on behalf of her late husband Dr Nic Jools AM preserves his memory as a keen connoisseur and collector of Australian art, and as a life-long philanthropist.

Dr Jools held a career as an obstetrician gynaecologist and later went on to teach medicine at the University of Sydney. In 1999 he was diagnosed with the fatal prognosis of Devic’s syndrome which is a debilitating illness that leads to paralysis. In 2010 Dr Jools received an Order of Australia in the Queen’s Birthday Honours ‘For service to the community through philanthropic donations of Australian art and financial support for a range of educational and medical organisations, as a benefactor to developing artists, and to medicine in the field of gynaecology.’ Over the years he built up an impressive collection of Australian art which can now be seen to catalogue the most iconic Australian artists of the mid 20th century. 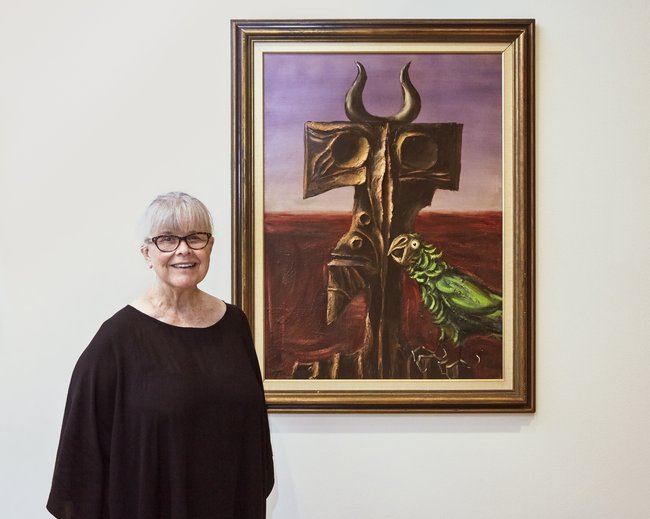 Barbara Jools with the painting she and her late husband Dr Nic Jools have gifted to the Art Gallery of NSW, Albert Tucker's The Intruder (1964)

Tucker’s The Intruder is an important addition to the Art Gallery of NSW’s collection as it is a key example of his imagining of the dry, eternal Australian landscape and his re-mythologising of the antipodean figure with a weathered double-axe head. The parrot also marks a recurring motif and became the artist’s symbol of Australia as a dangerous paradise. He described ‘the claws that tear and the beak that rips… heaven and hell incorporated in one natural form’ (quoted from Mollison and Bonham’s Albert Tucker, 1982, p. 64). The work joins two others by Tucker in the Gallery’s collection, Antipodean head II and Faun attacked by parrot 3.

I met with Barbara Jools in front of The Intruder in the 20th century Australian galleries and as we sat contemplating the work, we witnessed the many passing visitors stop to take it in. 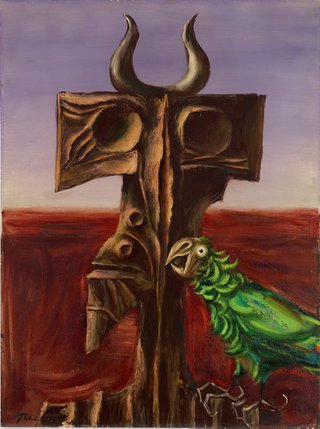 S: Do you know what drew Nic to this work?

B: I think if you asked him which was his favourite painting that definitely would have been the one. It was the first important original painting he bought. Nic purchased it from Barry Stern’s gallery in the early ‘80s… He had an eye, and he sacrificed the money when he was just a young doctor to buy it. It was controversial, and it used to tickle his fancy when people would react to it in our living room. It was a pleasure to him to explain the beauty of the plumes of the parrot with the cruelty of the beak and the cruelty of the claws, and the ‘Antipodean head’ ― the death’s head, and the very dry, landscape ― the very iconic imagery.

S: How did you and Nic meet?

B: I answered an ad in the paper ― he needed some help, and we grew very close over eight years. Then in 1993 we got married and it was wonderful! I miss him terribly.

S: And you shared a love of art?

B: Yes, we both had art in common. I’d studied European art, he had studied Australian art. It was so powerful and huge ― it was such enormous fun! We used to go ‘gallerying’ almost every weekend, and we’d go to the auction houses. It was just such good fun! We both researched the paintings together. Sometimes we’d strike a bargain, sometimes it would be full price. One night my husband spent almost $1 million buying three paintings at auction. It was his passion, apart from medicine. I nearly had a heart attack!

S: How did you and Nic approach art collecting?

B: You’ve just got to buy the thing, if you can afford it, when it comes onto the market. If you don’t get it then, you miss out. You can find other works, but you mustn’t settle for anything less than what you feel you really want. If something came along we’d buy it if we loved it, otherwise we’d pass on it and wait until we saw something better and then grab it before anyone else could get it.

The Modern school was Nic’s main area of interest, but we did have some earlier paintings and some later ones. We were just starting to get into some of the artists coming through. We got a big Gary Shead, a Euan MacLeod. We also collected works by woman artists. We had two Judy Cassab’s, an Elaine Haxton and one Margaret Olley. Really anything that we liked that was Australian and wonderful.

S: You have both been philanthropists for a long time and have gifted a number of important works to different institutions over the years. Was it always part of Nic’s vision to make works from your collection available to the public?

B: Yes, especially to make them available to children. It is important for people, especially children, to push the limits of their thinking with art and not just have safe things like cows grazing peacefully under trees, which are beautiful, but you want things that make you either love them or hate them. Art which brought out those other feelings was very important to him. That is why much of the collection is going to Knox Grammar School [Dr Jools’ alma mater].

S: What role did art play after Nic became ill? Was it still central to your lives?

B: Absolutely. We’d been buying paintings since 1985, the whole time that we’d been together. Nic only passed away two and a half years ago and I think the last major purchase was the three paintings that we bought on the one night.

Art lifts you out of yourself. I think with Nic he was in pain ― he had terrible pain ― and I think for him to look at art and to get excited by it made the pain sit in another place and he was able to put it away to the side. The art did that for him. He was very proud of his art. He just loved it. He had such a wonderful eye and from an investment point of view he chose really well. He was a wonderful man, and funny, and just gorgeous. 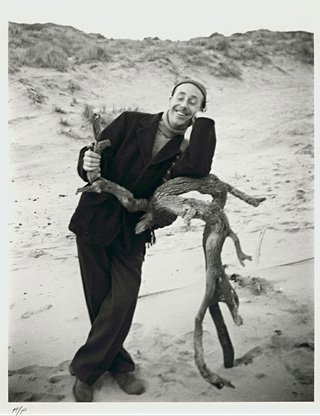 Click on the image of Albert to read more about him 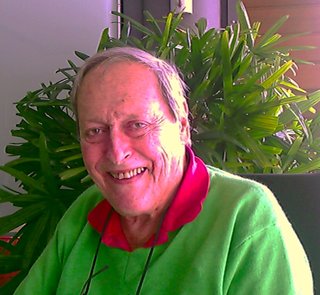