The National 2017: new Australian art (30 March – 16 July 2017) is the first of three biennial surveys of contemporary Australian art. The National is simultaneously presented throughout three of Sydney’s preeminent cultural institutions: the Art Gallery of NSW, the Museum of Contemporary Art and Carriageworks. At the heart of the Art Gallery of NSW’s display are two new acquisitions funded by the Gallery’s Contemporary Collection Benefactors (CCB) and Atelier (Young Patrons) benefaction groups.

Emily Floyd’s specially commissioned Kesh alphabet and Gordon Bennett’s Home décor (after M Preston) #18 (2012) were the focus of both groups’ fundraising efforts last year. The funding of these works was the first major project supported by Atelier, the Gallery’s newest benefaction group of young donors aged in their 20s to 40s, and was equally supported by the Contemporary Collection Benefactors. Both artworks mark important additions to the Gallery’s permanent collection of contemporary Australian art.

Floyd’s vast and brightly coloured aluminium installation of abstracted typographic forms inhabits the Gallery’s central court, inviting visitors to wander through. The artist references the fictional alphabet described by science-fiction author Ursula Le Guin in her novel Always coming home, written in 1985 as an anthropological study of the future matriarchal ‘Kesh’ society. Floyd uses Le Guin’s Kesh alphabet to spell out the noun ‘banhe’, which translates simultaneously to ‘inclusion,’ ‘insight’ and ‘female orgasm.’ Presented at the forefront of the exhibition and at the core of the Gallery, Kesh alphabet carves out a female space of knowledge and experience within an institution historically synonymous with patriarchal dominance. Floyd describes her work as ‘a spell or invocation’ suggesting a different future, while at the same time reminding us that language itself is a system which shapes world views whilst expressing them.

This special commission builds on Floyd’s installation project Labour garden created for the 2015 Venice Biennale and it is a significant addition to the Gallery’s collection of Floyd’s lithograph prints as it represents the major direction of the artist’s practice. 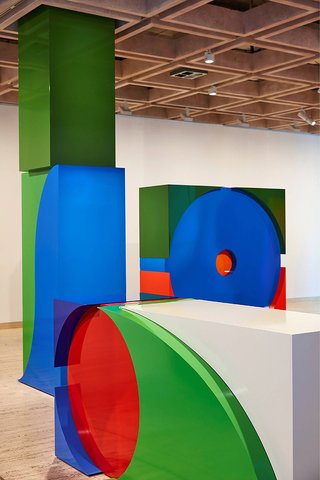 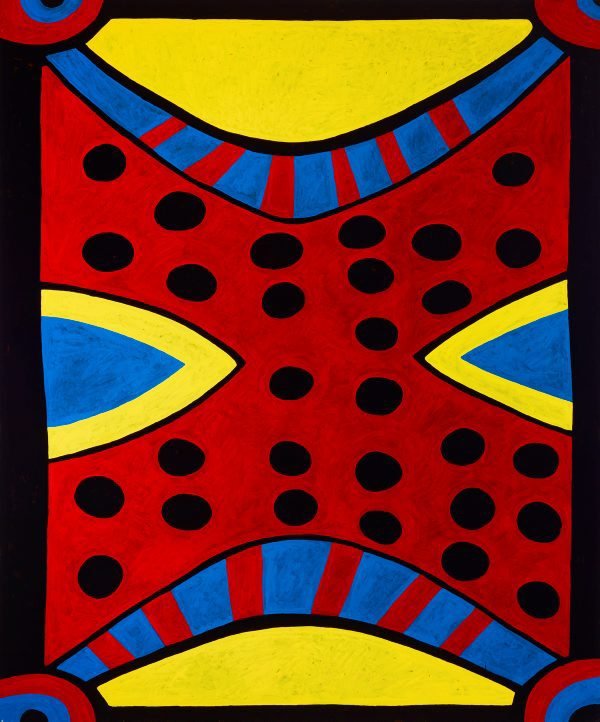 Gordon Bennett’s Home décor (after M Preston) #18 is displayed in the entrance court nearby, alongside other works from his Home décor series, lent to the Gallery for The National. The painting was purchased with the particular generous assistance from individual benefactors Peter Braithwaite, Gary Linnane and Michael Lao, Geoff and Jemma Brieger, Vicki Olsson and Alenka Tindale. Bennett came to prominence as a postmodern firebrand in the 1980s, and is regarded as one of the most relevant artists to emerge from Australia over the past few decades. Bennett created post-colonialist works which visually questioned the national narratives presented through representations of culture and identity. Home décor (after M Preston) #18 continues a series Bennett began in 1995 and returned to in 2010. It is one of the last paintings he completed before he died in mid-2014. Bennett references Margaret Preston’s use of Aboriginal motifs in her work and her push for an ‘Aboriginalised’ national imagery. In these vast, often brightly coloured canvases, Bennett overlays Preston’s Indigenous imagery with De Stijl compositions, recalling the strong influence of ‘primitivism’ throughout Western art of the 20th century (where Western artists adopted elements of non-Western art traditions). Bennett re-appropriates Preston’s Design from a Goolmary shield, North Queensland (1925), enlarging and re-orienting it. In doing so he invites us to question the ownership of imagery involved in cultural appropriation and to contemplate the moralities and meanings of plagiarism, authenticity and identity.

Bennett’s work forms an important post-colonialist counterpoint to the Indigenous-influenced, modernist works by Margaret Preston held in the collection. It also augments contemporary works by Indigenous artists Jonathan Jones and Reko Rennie which similarly draw upon traditional motifs of shields through a boldly graphic, contemporary execution.

The National brings together three of Sydney’s cultural institutions for a tour de force of Australia’s contemporary art scene. Similarly, the collaboration between Atelier and the Contemporary Collection Benefactors signals the groups’ shared interest in building the Gallery’s contemporary Australian art collection from strength to strength.