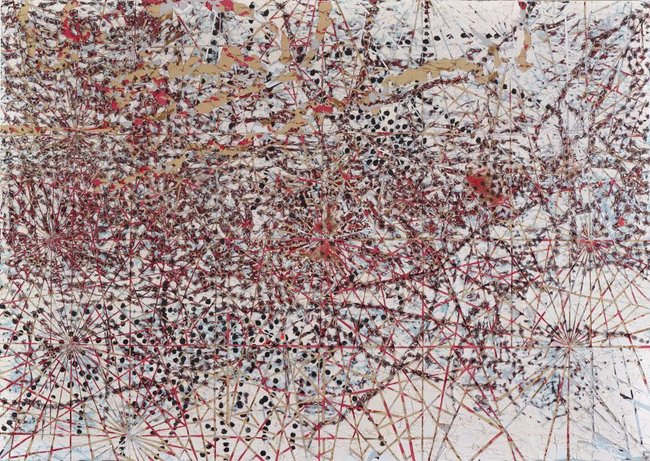 Three recent acquisitions for the Gallery are on display on lower level 2.

This painting by Mark Bradford (USA b1961) was first exhibited in Sea Monsters, a solo exhibition held in 2014 at the Rose Art Museum, near Boston. Inspired by the fantastical creatures used by medieval cartographers to indicate uncharted waters, works in the exhibition alluded to the contradictory feelings of allure and threat that often characterise our response to the unknown.

The tongue in the middle of the port is made from merchant posters found near the artist’s studio in South Central Los Angeles. It resembles a giant map but rather than offer a scientific description of a territory it evokes the socio-economic conditions of a neighbourhood in a near constant state of reinvention.

As Bradford has described: ‘I started thinking about how my studio is in South Central ... where people are struggling, underwater with loans and mortgages. And that made me think about the conquistadors, the history of colonization ... Then I thought about the ancient waterways that facilitated colonization — how they moved sexy cash along. Then about the mysteries of the water — how people thought the ocean was filled with monsters. And how when people think about South Central — the way it’s been depicted — it’s full of its own version of sea monsters. The unknown—those dark, scary waters.’

The work was purchased with funds provided by Wassim Rasamny and an anonymous donor. 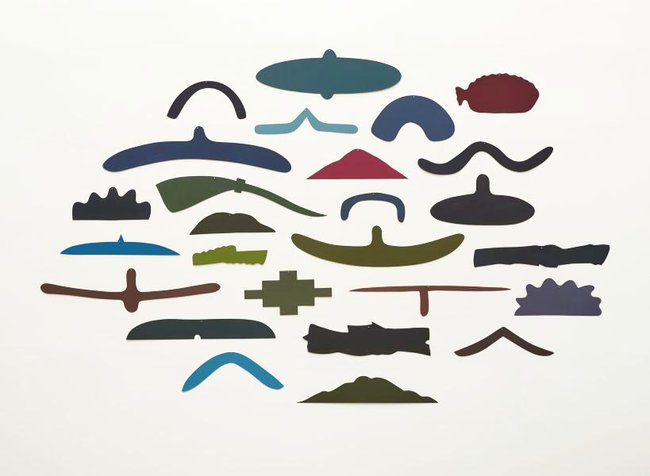 Richard Killeen (New Zealand b1948) is a New Zealand painter renowned for his 'cut-outs' - collections of painted aluminium shapes that can be hung in variable arrangements. Such works were seen in Australia in 1982 and 1986 at the Sydney Biennale and, through the 1980s and 90s, in exhibitions at Ray Hughes Gallery.

Killeen draws on many art histories and cultural sources to create his image-rich art. This work is one of three called Dreamtime from 1980 that make special reference to Aboriginal art. As critic Francis Pound has remarked, here landforms, boomerangs and other tantalising ambigous shapes 'float in the colours of the night'.

The work is the gift of Jim Barr, Mary Barr and Richard Killeen, founding governors of the Friends of New Zealand Art. 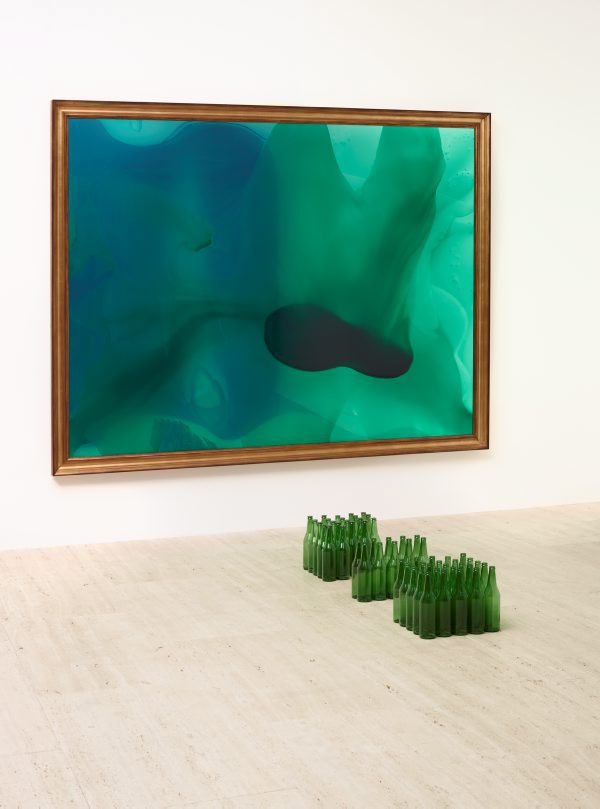 Since the mid 1990s Dale Frank (Australia b1959) has developed an experimental process based on the pouring and setting of varnishes, enamels and resins on supports laid flat.

Frank’s Ambition 25 + regrets 10 + death 21 = 56 is a framed mirror layered with swirls of chemical-green varnish, its fluidity suggesting psychological as well as astral landscapes. The work also carries reflections of gallery-goers, making the painting into a portrait of the here-and-now.

The work’s title is a formula calculating the sum of a lifetime’s hopes, achievements and disappointments, which equals the artist’s age at the time of making, and is further represented by the number of accompanying empty vessels.

The work was purchased through the Contemporary Collection Benefactors Fund.