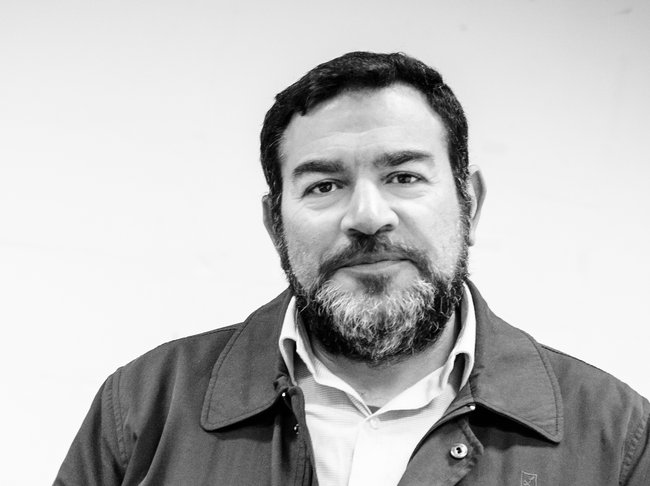 A promise is an assurance that is enlivened by an action. It is something made by one to another and confirmed through shared understanding. A promise embodies hope and trust but also anxiety and relief as it is either kept or broken.

I was born in Tripoli and migrated with my family to Australia in 1978 to flee the civil war in Lebanon. As a teenager I became interested in music and film and I often think back to those days listening to Prince and funk music. I also loved Eric B & Rakim and Public Enemy and began to make my own music and perform on Sydney’s hip-hop scene. In the 1990s I made the move to visual art, but I still like to incorporate music and film in my work. After 2001 I went through a period of self-reflection and embarked on a series of visits to my birthplace and the surrounding countries. These journeys have inspired me to make work about the connection between spiritual belief, culture and politics.

When curator Matt Cox and I began working on this exhibition about a year ago, we entered into an agreement to work respectfully, to acknowledge each other’s perspectives and to meet challenges together. In sum, we made a commitment to see it through, we made a promise. We weren’t to know that COVID-19 was just around the corner but as promises go, we remained steadfast and travelled by phone and internet to meet and talk along the way. I’m pleased to think we have almost made it through and am looking forward to seeing the works in the Gallery space.

This exhibition will present works made over the last 20 years since 2001. It is a personal map of sorts that traces the complex relationship between the self and other, belief, devotion and the possibilities for transcendence. I hope that you can join me on this journey. 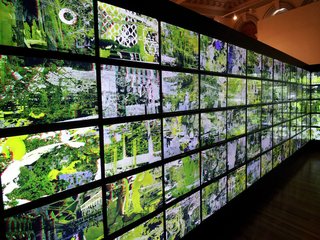 This work ruminates on the relationship between religion and spirituality in the digital era. In Sufism it is very difficult to explain the true meaning of the Arabic word Nur (light). Light is the purest entity that exists. In Sufi texts the Divine, described Itself as being Nur. Sufi texts say that true inspiration comes from knowledge, which comes from Nur enlightening an individual’s heart.

Nonetheless, the Prophet Muhammed, alayhi as-salām (عَلَيْهِ ٱلسَّلَامُ), says there are 70,000 veils of light and darkness separating an individual from the Divine. Sufis understand these veils to refer to the degrees to which the Divine is beyond description and imagination.

This work took me approximately 10 years to make and involved manipulating 10,000 photos to decipher 70,000 digital layers, which were then reconstructed to create 1000 composited 3D video sequences displayed across the 96 LED TV monitors you see here.

In universal terms this work speaks to the mysteries of life. When we install the work and you have put on the 3D glasses we hope that you get a sense of being enveloped by it, or of passing through a veil or a threshold. You will see images that are like memories to me, including images of art and daily life that I photographed on my travels and here at home. 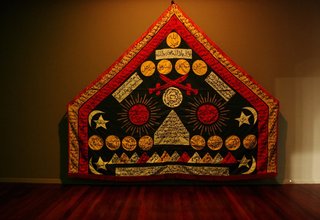 A Sanjak is a sacred and ceremonial banner used by Sufi, Shia and Sunni Muslim communities. This banner, decorated with the names of the Divine, Prophets, Angels, Islamic saints and scholars, has deep spiritual significance for me and for the broader community. On one of my regular visits to Tripoli this Sanjak was entrusted to me as a gift from a Rafi Sufi order as a symbol of our shared spiritual journey.

Sanjak is one component of a major work titled Corner made in 2012. In exhibiting this one element within A promise it is my intention of sharing this Baraka (blessing) for all that enter the space. Additionally, in positioning the Sanjak where it is, we hope to offer a welcome gesture, an invitation to learn, and a guide as we move through the exhibition together. 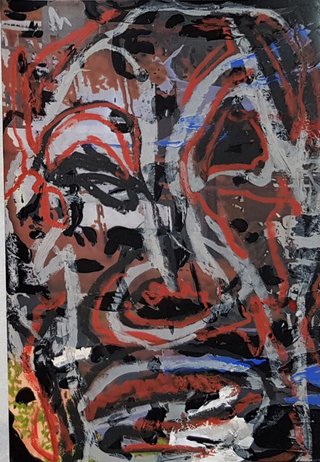 These 14 intimate portraits sit side-by-side like invited guests at a table, offering you a moment of self-inclusion and reflection. Consistent with my interest in working images into abstraction, each painting began as a landscape photograph from the 70,000 veils digital composites. Although they now appear as figurative portraits, there is a degree of abstraction that makes them accessible, familiar and universal.

This asymmetrical series tells the emotionally numbing story of what it is like growing up in segregated and contested territories. This story is not only my story. There are millions globally who have suffered and continue to experience suffering due to political ideologies and the hate rhetoric of division and distance that sets us against one another – as invoked by sayings like ‘good fences make good neighbours’.

The white chalk on black brings to mind the classroom and children’s games scribed onto the black tar of the road of distorted histories. One can imagine a child’s daily walk home along broken footpaths and the detritus of war surrounded and fenced in by barbed wire and no-go zones. Realised in what may appear to be a naïve style, this installation is my take on the power of image and the role it plays within the grand scale of order, disorder and abstraction. 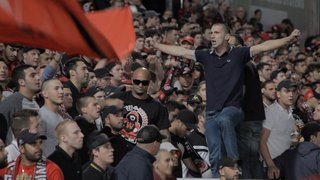 In this work I wanted to explore heightened states of consciousness and pop fanaticism, ritual and devotion as they find expression across different cultures and space, be they private, public, religious or secular. Dominating the space will be the Western Sydney Wanderers football fans, known as the Red and Black Bloc (RBB). What inspired me to make this work is the coming together of multicultural Australia through the so-called ‘wog game’ of football. I spent several weeks shooting this footage of the crowds, watching people of all cultures waving banners while tuning into the repetitive sounds of their chants and percussion, and I wondered if we might find a new spirituality grounded in the everyday.

In dialogue with this congregation, you can find a sequence of black-and-white videos showing the Javanese dancer Agung Gunawan performing a slow and introspective dance driven by the sound of the masses that evokes a state of spiritual transformation, a search for balance between love and hate, possession and dispossession.

In the middle of the room, a mask awaits as a silent yet active agent in the spectacle. It presents us with a metaphorical avatar, a possible persona to be worn before entering the arena. It is a promise of the possibilities of inclusion, togetherness and transcendence.