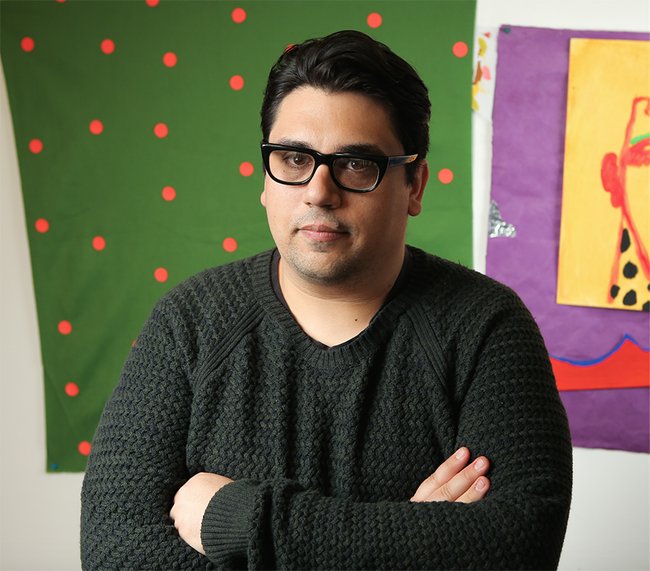 In The art that made me, artists discuss works in the Art Gallery of NSW collection that inspire, influence or simply delight them. This selection by artist Tom Polo first appeared in Look - the Gallery's members' magazine.

You might recognise Tom Polo from his 2016 stint at the Gallery painting a wall piece in the entrance court for the Spectrum Now Festival. This year he returns as one of 24 artists included in The National 2019: New Australian Art, which explores the latest ideas and forms in contemporary Australian art.

The 2015 recipient of the Brett Whiteley Travelling Art Scholarship ‘uses painting and painted environments to explore how conversation, doubt and gesture are embodied within abstracted acts of portraiture’. Justin Paton, the Gallery's head of international art, writes in The National 2019 catalogue that ‘pensiveness, undecidedness and gentle expectancy are the feelings Tom finds in these paintings’. 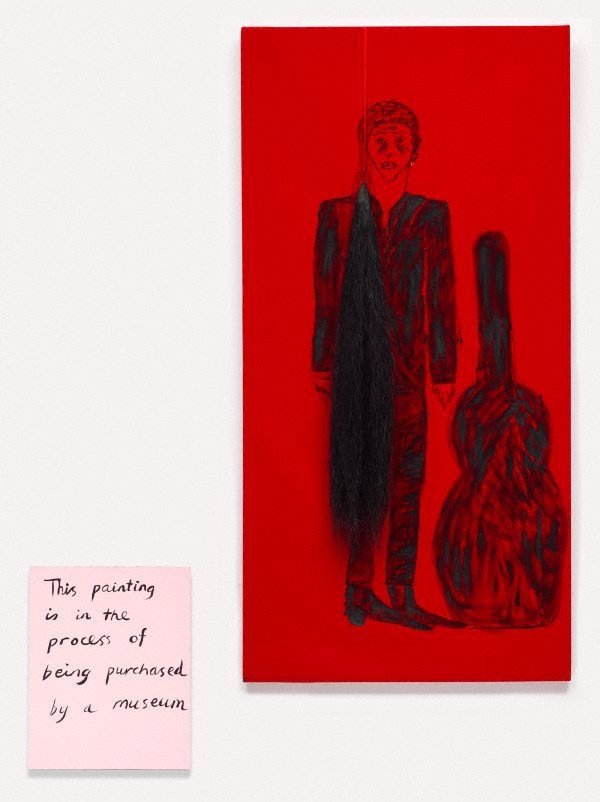 Jenny Watson Eternal youth
There is so much to admire about the spirit of Jenny Watson and her practice – and this work is no different. Personally, it really summarises two things I love about Jenny as an artist: the sincerity of representing oneself accurately and a deep connection to the materials used to do so.

Her use of red velvet is mesmerising; the luscious texture of this surface feels like it may go on forever. The figure with its guitar case, created with black oil paint, feels intuitive and urgent – that it ‘had to’ happen, like much of her work. The use of a false horsetail is a special nod to her deep connection to the animal. It somehow manages to be both beautiful and funny.

I can’t help but think of myself and my peers when I read ‘This painting is in the process of being purchased by a museum’. It emphasises the mix of aspiration, glory and doubt that artists are filled with throughout their careers. For me, both the text panel and the figure have something in common: a sense of anticipation and waiting. An uncertain blind faith about what’s to come. Is it a bus? A two-dollar coin offered by a stranger? Or the acquisition of your work by a museum? Whatever it is, it’s worth waiting for. 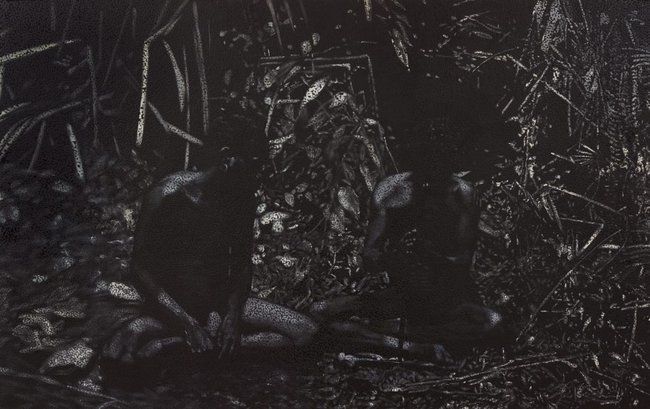 Daniel Boyd Untitled (FS)
Daniel Boyd is, for me, one of the most important artists working in Australia today and this work has drawn me back to Yiribana on recent visits to the Gallery.

He works across various mediums to reinterpret Eurocentric perspectives on wider Australian histories as well as his own personal ones. The image depicted here is sourced from an archival photograph and his reinterpretation on this large scale creates an immersive experience within the landscape — I feel this every time I see it.

What I really like about Daniel’s work is that he continuously asks the audience to consider what they are looking at, through various ‘lenses’. When you’re standing in front of this painting, you notice the way that light and shadow interact with the surface of shiny dots, which are made using archival glue. Any movement you make changes the way the image is ‘seen’ and, significantly, how we may read the particular history Daniel is depicting, from our own personal and cultural points of view. 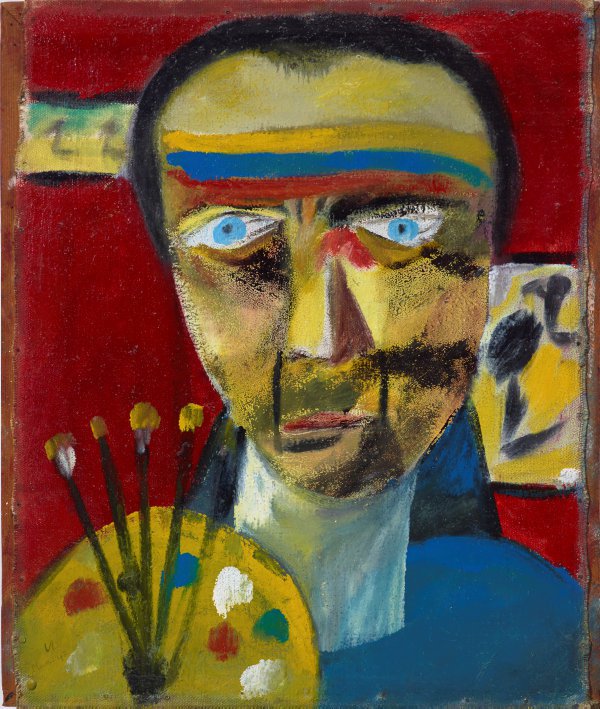 Sidney Nolan Self portrait
I first saw this work during a school outing two decades ago. Our class was given some time to explore the Gallery on our own and I was immediately pulled towards this little painting, knowing nothing about the artist or subject, but I quickly wanted to know more.

I remember thinking – and I suppose, am still of this thought – that one day I’d like to make a portrait like this. When you see the painting up close you’re seduced by the glossy, enamel paint that has been applied to the surface of the hessian – both rapid and delicate. The uneven edge of the material nailed into the wooden frame supporting it is one of my favourite things about the work.

There’s a distinct confidence in the way that Nolan has depicted himself: a sense of certainty that I still feel through the sharpness of his gaze. This pride extends itself to his brushes and palette, which are ‘on show’ – a type of artist’s armour – depicting the strength of self-expression many of us strive for. 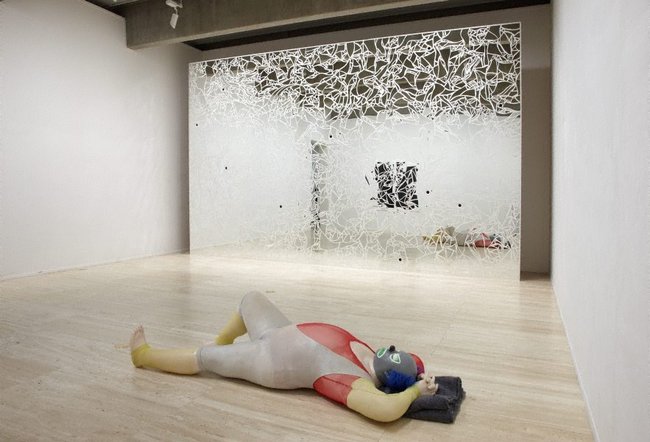 AGNSW collection Ugo Rondinone what do you want? 2002

Ugo Rondinone what do you want?
First encountering what do you want? was like stepping into some other world. Walking into the installation, you’re met with a large mirrored wall that is broken into a thousand fragments, distorting everything being reflected, including yourself, as you move through the space. On the ground is a sculpture of a clown lying down, intriguingly titled if there were anywhere but desert. wednesday. It’s so eerily realistic, that when I first saw it, I thought it might have been a living performer.

But what really held me was the sound that emerges from within the wall: a continuing dialogue of questions back and forth between two people asking, ‘What do you want?’ ‘What do I want?’ ‘Yes, what do you want?’ ‘I don’t want anything,’ and so on. The narrative is elusive and heavy; banal, familiar, dark and funny. It feels like you’ve found yourself on the set of a TV drama set in 1960s New York, waiting to see what unfolds. It’s certainly strange, but in all the right ways.