Yosl Bergner and the social realists 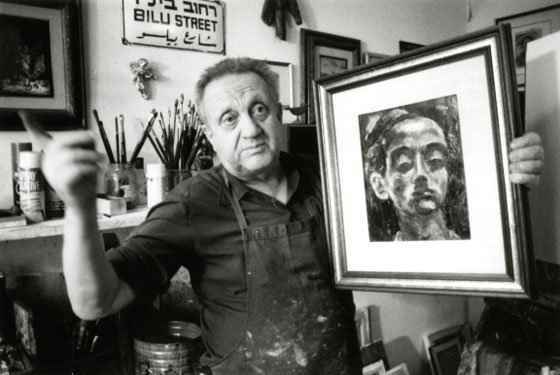 Yosl Bergner arrived in Melbourne from Poland in 1937 aged 17. He had early ambitions to be a painter, but it was in Australia that he established his practice, at a time when he connected to a wider group of politically informed, progressive painters. Bergner had fled Europe as a result of the rising tide of anti-Semitism. In Australia, the themes of oppression and human resilience formed the foundation of his art.

In the 1940s, Bergner became an important proponent of the social realist group of painters. While he drew on the humanity of his immediate surrounds (the plight of Aboriginal people living in Fitzroy for example, was a recurring subject of his art) his work also maintained a sense of his experiences of Warsaw from his youth. He connected his memories of Europe with the realities of Melbourne’s inner-city, expanding on his notion of greater human connections and the shared struggles of the marginalised. 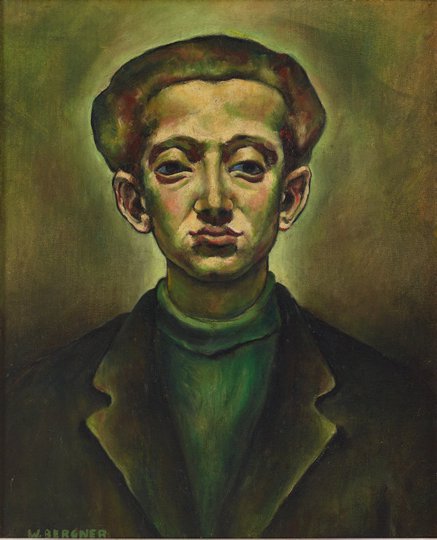 This arresting self-portrait, painted by Bergner while he was a student at the National Gallery of Victoria Art School, aged just 19, was recently acquired with the support of the Art Gallery Society of NSW through the Dagmar Halas Bequest 2020.

In 1939, as Bergner was developing a style that could express his social concerns, he experimented with reflections of his image and produced the exceptional Self-portrait 1939. The work reveals his study in modern form through reference to the work of Cezanne, which is reflected in the overarching attention to organisation and underlying structure. Despite this composure, the portrait, conveys great depth of mood and expression. The simplified, rounded features draw attention to the evocatively weighted eyes, a feature which speaks of the subject’s burdened past, while projecting a strong sense of a vital present. Distinct with its sombre, green-inflected earthy palette, its bold forms and binding contours, Bergner projects a defiant statement of identity. 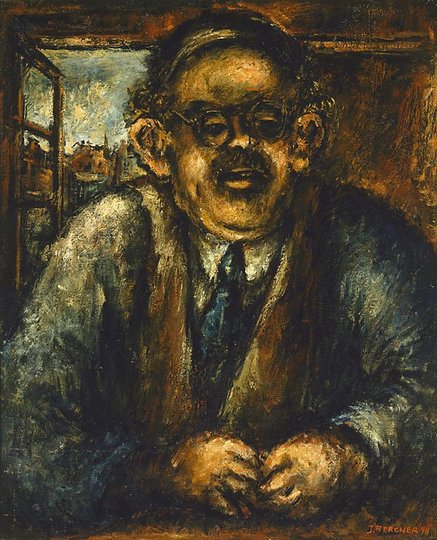 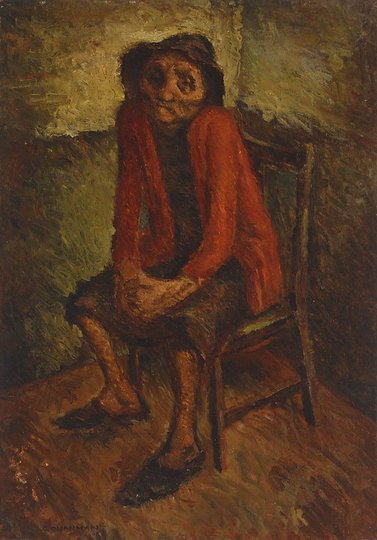 In the 20th century, social realism developed in response to the social and political turmoil of the inter-war years. World War I and the Great Depression inflicted pronounced inequality and hardship. Around the world, social realist artists sought to portray the lived experiences of society’s marginalised with frankness, believing that art should serve a social purpose. Internationally, artists such as Käthe Kollwitz, Edward Hopper and Dorothea Lange captured this, building on the social realist centring of the working classes by French artists Jean-Franҫois Millet, Honoré Daumier and Gustave Courbet almost a century earlier.

In Australia, a loose coalition of politically motivated artists, including Yosl Bergner, Noel Counihan and Danila Vassilieff were committed to painting the experiences and struggles of the everyday. They drew on subjects from their inner-city Melbourne surrounds, painting workers, dispossessed Aboriginal people and the urban poor, and creating images that reflected the ongoing impact of the war and Depression while capturing their subjects' humanity, dignity and resilience. All were members of the Contemporary Art Society (CAS), established in 1938 in opposition to the perceived conservatism of the Australian Academy of Art. Newly arrived from Europe, Bergner and Vassilieff introduced their Australian contemporaries to the urgency of expressionism and socially motivated art, influencing other members of CAS, including Arthur Boyd, Sidney Nolan and Albert Tucker, who would later all emerge as some of Australia’s best-known artists.

In 1944, Bergner, Counihan and another CAS member, Vic O’Connor, included a statement in the Contemporary Art Society Sixth Annual Exhibition catalogue outlining the aims of their art as social realists:

Each seeks to create a democratic art combining beauty of treatment with a realistic statement of man in his contemporary environment. Believing that art is not a passive factor in life, we strive to create an art which will influence men towards the solution of their universal problems.

For my subjects I must find something that speaks to me. Something simple and elemental. I may find that anywhere - in a street, in the form of an apple, in a garden, or in a grimy slum lane. 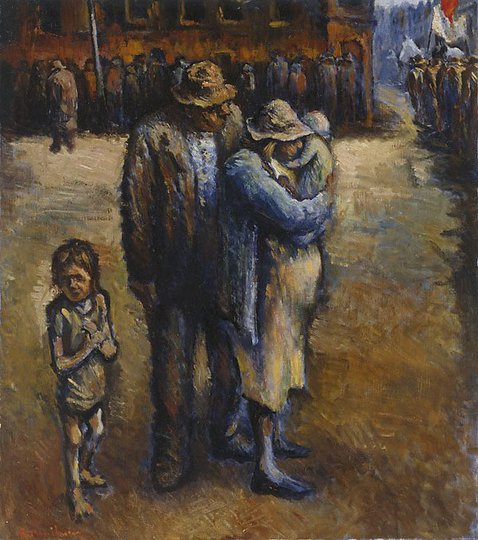 AGNSW collection Noel Counihan At the start of the march 1932 1944
https://www.artgallery.nsw.gov.au/collection/works/7409/ 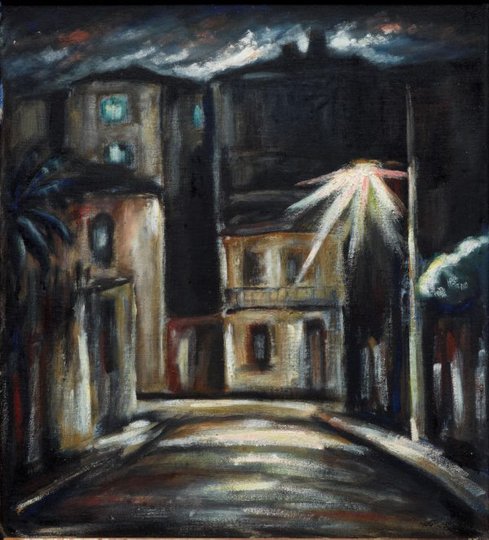 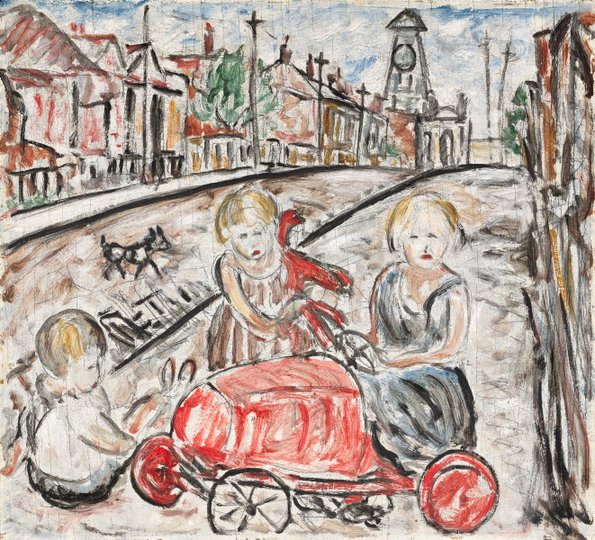 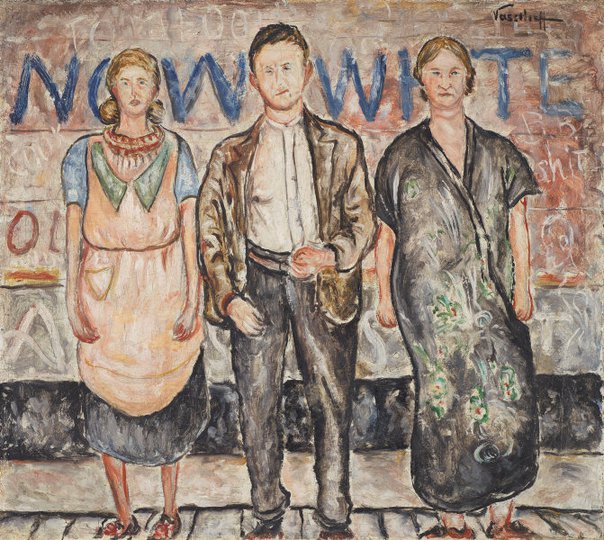