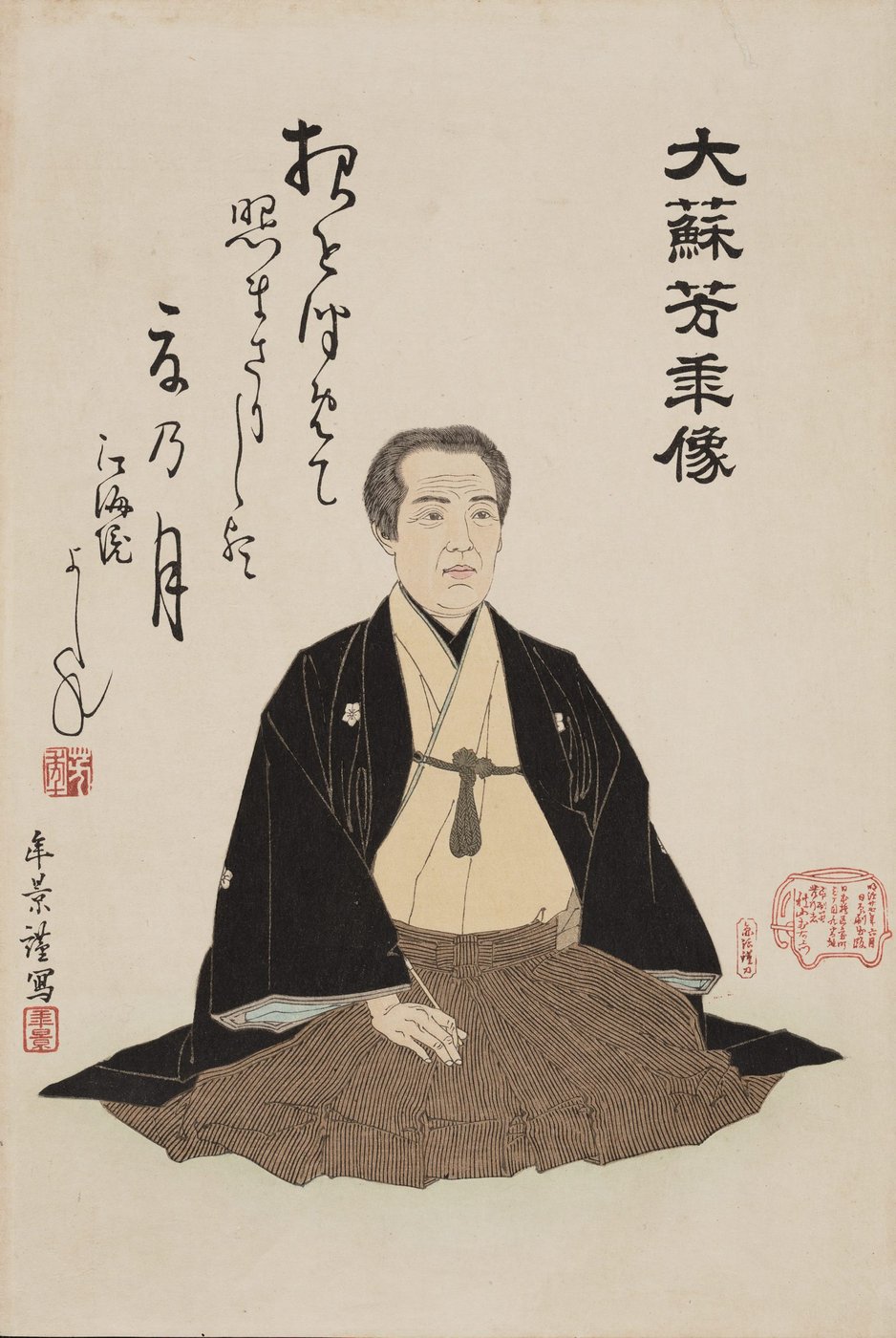 Tsukioka Yoshitoshi is widely recognised as the last great master of traditional Japanese woodblock printing, known as ukiyo-e, and an originator of manga and anime. He is renowned for his highly imaginative, often flamboyant and even disturbing depictions of historical events, warriors, beautiful women and the supernatural. His career straddled two eras – the final years of the Edo period (1615–1868) and the first few decades of modern Japan.

Yoshitoshi was born in Edo (current-day Tokyo) on 30 April 1839. His father, Owariya Kinzaburō (1815–63), was a merchant who bought samurai status in order to advance in the hierarchical class structure of Tokugawa Japan. Yoshitoshi’s parents are believed to have divorced, but most of what is known about Yoshitoshi’s personal life was written in the 1930s by his student Yamanaka Kodō (1869–1945) and is considered unreliable. From 1850 until about 1859, the young Yoshitoshi was apprenticed to Utagawa Kuniyoshi (1797–1861), one of the most famous ukiyo-e designers of the time, whose work is represented in the Art Gallery of NSW collection. In 1853 Yoshitoshi published his first print, The drowning of the Heike clan in 1185. Following the Meiji Restoration in 1868, Japan steadily opened up to the rest of the world. It was a time of rapid industrialisation in which new technologies such as photography and lithography were introduced. Change was also reflected in the prints being produced in Japan in the latter part of the 19th century, as artists chronicled the modernisation of the country – from transformations in cityscapes to the adoption of Western attire. Kuniyoshi’s interest in European prints appears to have influenced Yoshitoshi’s approach to perspective, realism and the individuality of the subject. In 1861 Kuniyoshi died, followed by Yoshitoshi’s father in 1863. Although his personal name was Yonejirō, after these events the artist called himself Tsukioka Yoshitoshi (‘yoshi’ derived from the second character in ‘Kuniyoshi’). Initially enthusiastic and open to Western influxes, Yoshitoshi became increasingly sceptical about the loss of numerous aspects of traditional Japanese art and culture, and concentrated his efforts in introducing new themes and techniques to the stagnant art of ukiyo-e. A prolific artist, he soon became known for his representations of gruesome yet compelling fantasies including an early series, Twenty-eight famous murders accompanied by verse [Eimei Nijūhashūku] 1866–67 (with Utagawa Yoshiiku). His macabre 1885 diptych A picture of the lonely house on Adachi Moor [Ōshū Adachigahara hitotsuya no zu] shows a pregnant woman strung upside-down by a hag who prepares to slice her open. Yoshitoshi’s habitual use of such themes led to conjecture about his troubled personal life including financial problems, failed relationships and mental breakdowns. Yoshitoshi’s final work before his death in 1892 was the quieter One hundred aspects of the moon [Tsuki hyakushi], the complete series of which is in the Art Gallery of NSW collection. Each of its 100 images draws from stories relating to the moon in Japanese and Chinese history, legends, literature, theatre and folklore, and reflecting on the human condition. The characters in the stories are diverse, from everyday townspeople to courtesans, warriors, samurai and demons. In this work, Yoshitoshi was able to introduce new techniques such as perspective and realism to ukiyo-e printmaking. Published between 1885 and 1892, the series is recognised as the artist’s masterwork and a supreme masterpiece of Japanese printmaking.

Commoners and the floating world

These works reflect the theme of commoners and ‘the floating world’, a central aspect of the ukiyo-e tradition that depicted everyday life during the Edo period. References are made to the transient life of courtesans who lived in entertainment areas, as well as aspects of peasant life. After the battle of Sekigahara in 1600, Tokugawa Ieyasu made his base in Edo and his authority was established over the country. The representations of everyday people and their activities relate to a time when merchants were becoming more powerful, expenditure started to grow and the samurai increasingly found themselves in debt.

Tsukioka Yoshitoshi often presented scenes derived from dramatic nō (‘skill’ or ‘talent’) plays, comic interludes between nō pieces known as kyōgen (‘wild words’), and kabuki theatre. Nō developed from various forms of dance drama and was accepted as an aristocratic art in the late 14th century when it came under the patronage of the Ashikaga shogunate. It was then further developed by the famous dramatist Zeami (c1363–1443). Kabuki, on the other hand, was a popular visual theatre of song and dance that began as street entertainment for commoners. Many of the stories in Japanese drama were adapted from literature and legends that had existed for hundreds of years.

When the samurai, Japan’s military class, seized control of Japan in the 1100s, they established their own artistic traditions influenced by Zen Buddhism, Confucianism and other aspects of Chinese culture. Their exploits were recorded and mythologised in various tales. The images of warriors portrayed by Tsukioka Yoshitoshi come from stories such as The tale of Heike (Heike monogatari), the legend of the battle between the Tairo and the Minomoto clans at the end of the 12th century. Another story referenced is Taikōki or Chronicle of the Taikō (or ‘Regent’) about the life of the great leader Toyotomi Hideyoshi (c1536–98), whose rule was passed to Tokugawa Ieyasu two years after his death.

Aristocracy and the elite

These stories are set in the Heian period (794–1185) and focus on elites living at the centre of politics and culture in Kyoto. The Heian period was recognised as the golden age of the imperial court. Women of the time were educated and active in literary life, writing stories often set in aristocratic circles, such as The tale of Genji written by Lady Murasaki Shikibu in the 11th century. Fashions of the period, such as shaved eyebrows, loose long hair and layered robes (jūnihitoe) for women, as well as a specific headdress favoured by men, can be identified.

Many of these stories are from Chinese and Japanese literature, legend and mythology. Chinese tales had a great influence on Japanese art and culture, particularly during the Nara period (710–84). Also apparent in Tsukioka Yoshitoshi’s prints are the influences of historical events, politics and religion, in particular the adoption of Zen Buddhism and Confucian beliefs during the Tokugawa period (1568–1868). While some of the stories are set in China and feature historical Chinese costume and characters, others are fables particular to Japanese life and culture and were well known to audiences of the time.