In the artworks in this section, artists take control of the frame to assert Aboriginal presence and identity. Many of the works critique systems of representation and the legacy of historical stereotypes. 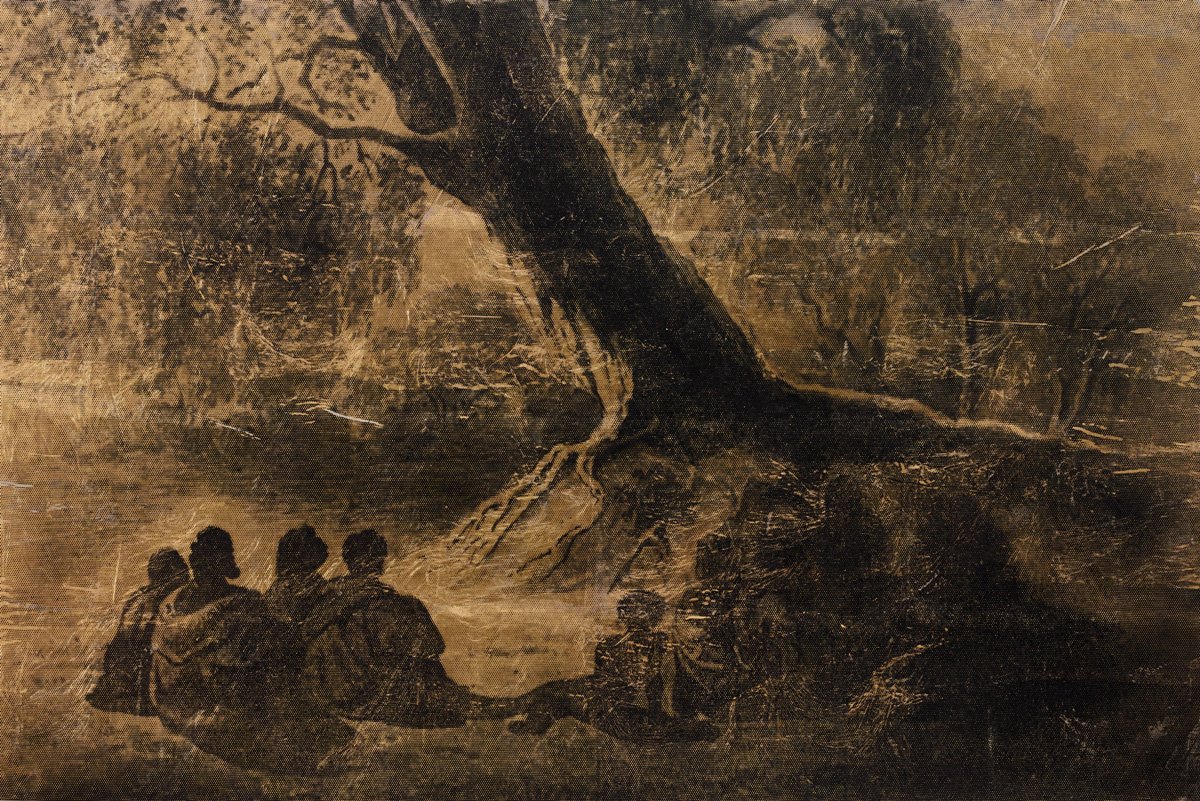 Brook Andrew is a Wiradjuri artist whose practice is concerned with the politics of representation. Many of Andrew’s works explore how culture and identity are expressed within the context of archives and museum collections. This is often achieved through the re-presentation of archival material – especially photographic images – that have previously been used to constitute Aboriginal culture within a Western colonial narrative. Andrew’s practice problematises ideas about truth and representation and highlights the fact that ‘few art works … represent fantastical Australian Aboriginal cultural activities and landscapes without … paternalistic cravings’. 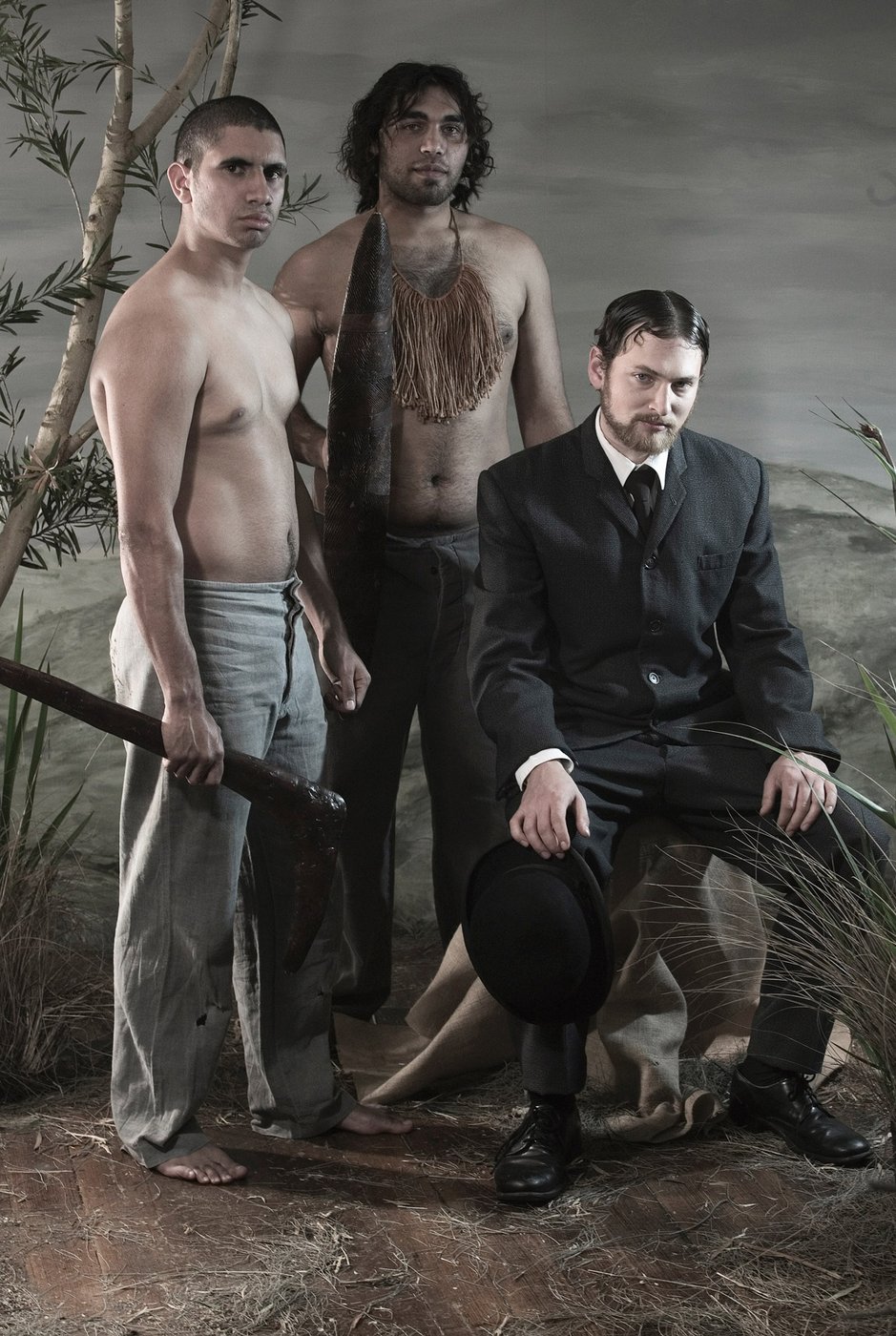 In 2004, Worimi artist and curator Genevieve Grieves worked with the historical Aboriginal photographic collection at the State Library of Victoria to repatriate images. The collection consists predominately of images of Victorian Aboriginal people taken by non-Aboriginal male photographers. Though laden with colonial politics, the photographs are in many instances the only existing images of people and communities. Grieves’ role was to relocate, both physically and emotionally, the images from the antiquated ethnographic archive into contemporary Koori family photo albums. Decoding these constructed images was the inspiration for Grieves’ work, Picturing the old people 2005, a five-channel video installation representing the five themes she had identified: desire, warriors, mourning, family and lost children.

It is very slow because it is looking back into the past. It’s not contemporary. It’s reviving or exploring that time [1800s]. And people’s experience. That’s what I think is powerful about the work; you get a sense of people’s actual experience, lived experience. I wanted to pull those photos apart. I wanted to say there’s all this stuff going on at the time and you can see it in people’s eyes. You’ve got these women under these fake humpies, you can see it in their eyes. That they were struggling. And they’d suffered. And you can absolutely feel it. That’s what I wanted to show. I think those photographers didn’t know what they were capturing. They had an idea about capturing the ‘noble savage’, but they captured all this other stuff that they probably didn’t mean to, including emotion and lived experience. 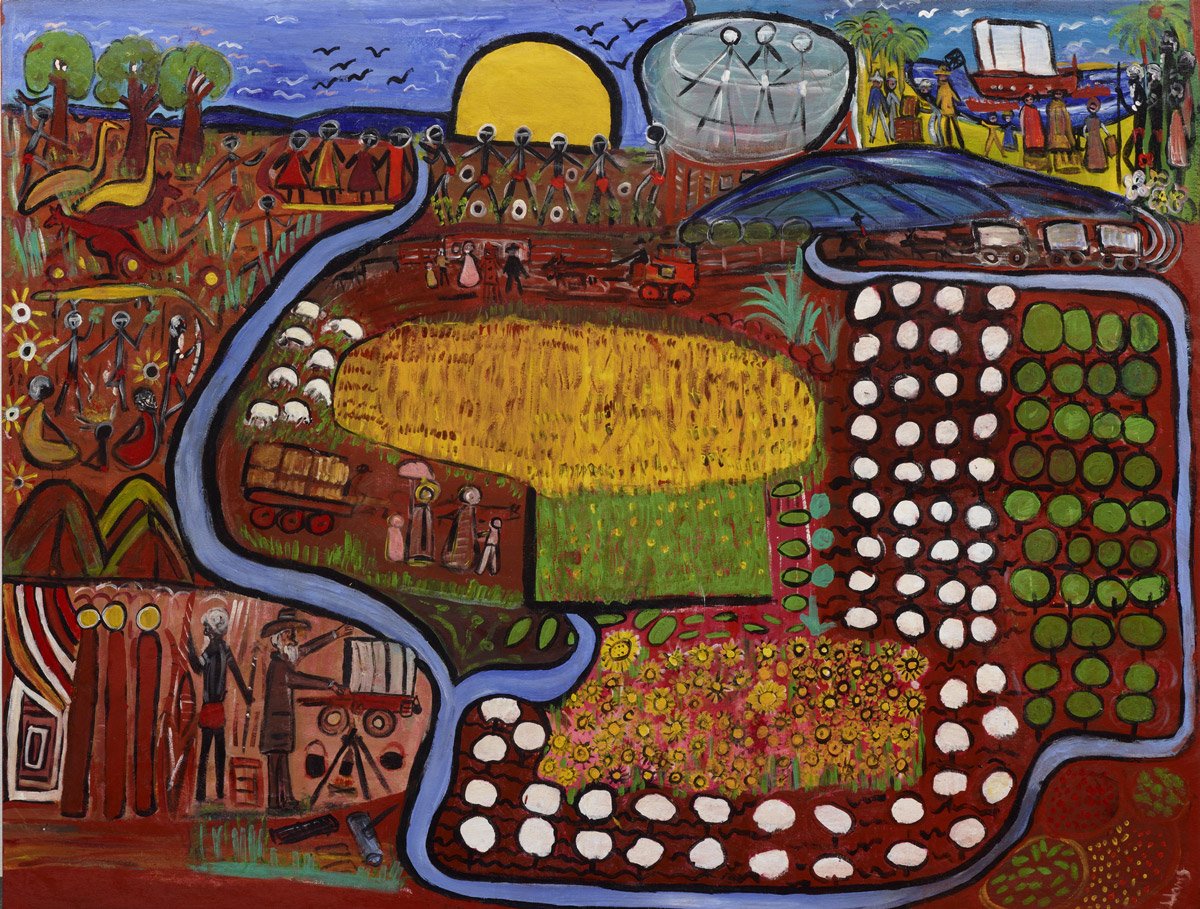 Margaret ‘Marg’ Adams was born in 1942 at Top Camp mission on the banks of the Mehi River, in Moree, NSW. She began her painting practice in the 1980s when she became involved in political and cultural activity, painting stories and histories she had learned and recalled from elders. In Reflection 1996, Adams uses her favoured subject of the river as a device to tell history. Along the course of the river, we witness important scenes and moments from the history of colonisation. 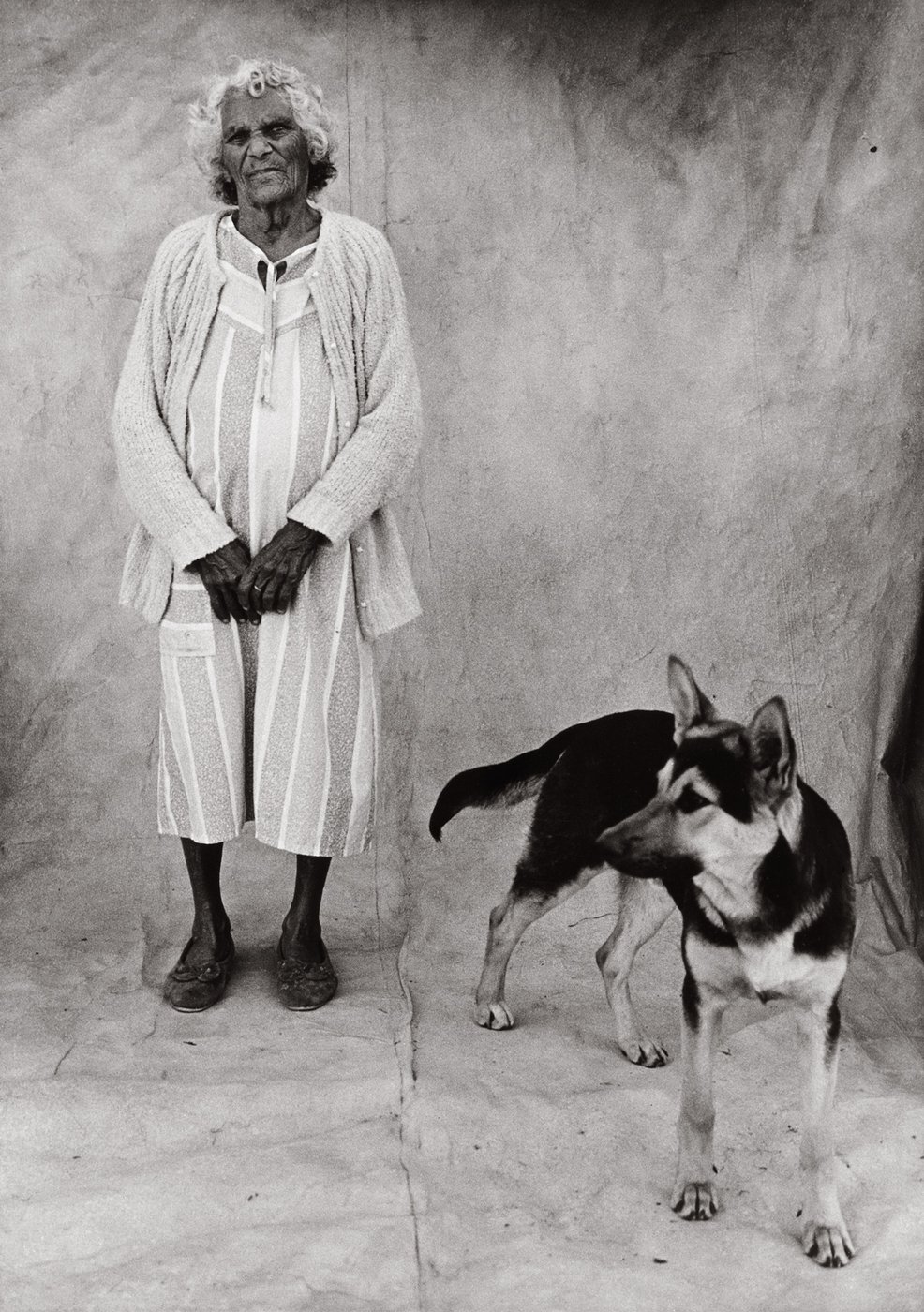 Wiradjuri/Kamilaroi artist Michael Riley was integral to the establishment of Australia’s Indigenous photography movement, which collectively shifted the way in which Indigenous culture is seen, understood and discussed. Early in his career, he was part of the landmark exhibition NADOC ’86 exhibition of Aboriginal and Islander photographers, held in Sydney. Photography, until this time, had been predominantly created and often used by non-Indigenous Australians as a tool for framing Indigenous Australia, and manufacturing and preserving racist stereotypes. The NADOC ’86 artists, however, took control of the camera, changing the way their communities were portrayed and forever shifting the colonial gaze. Many Indigenous artists began to document their communities, families and friends and for the first time the reality of Indigenous Australia was witnessed.

A common place: portraits of Moree Murries [1990] was an important show for me in that it showed a community of Aboriginal people, in the country. There are two Aboriginal missions in Moree and I got people from both those missions together and photographed them. It looks like people walked in front of the camera and sat however they wanted to sit and showed themselves however they wanted to show themselves. All of them were related to me. It’s important because it is a record of a community at that time and a few of those people have passed away. 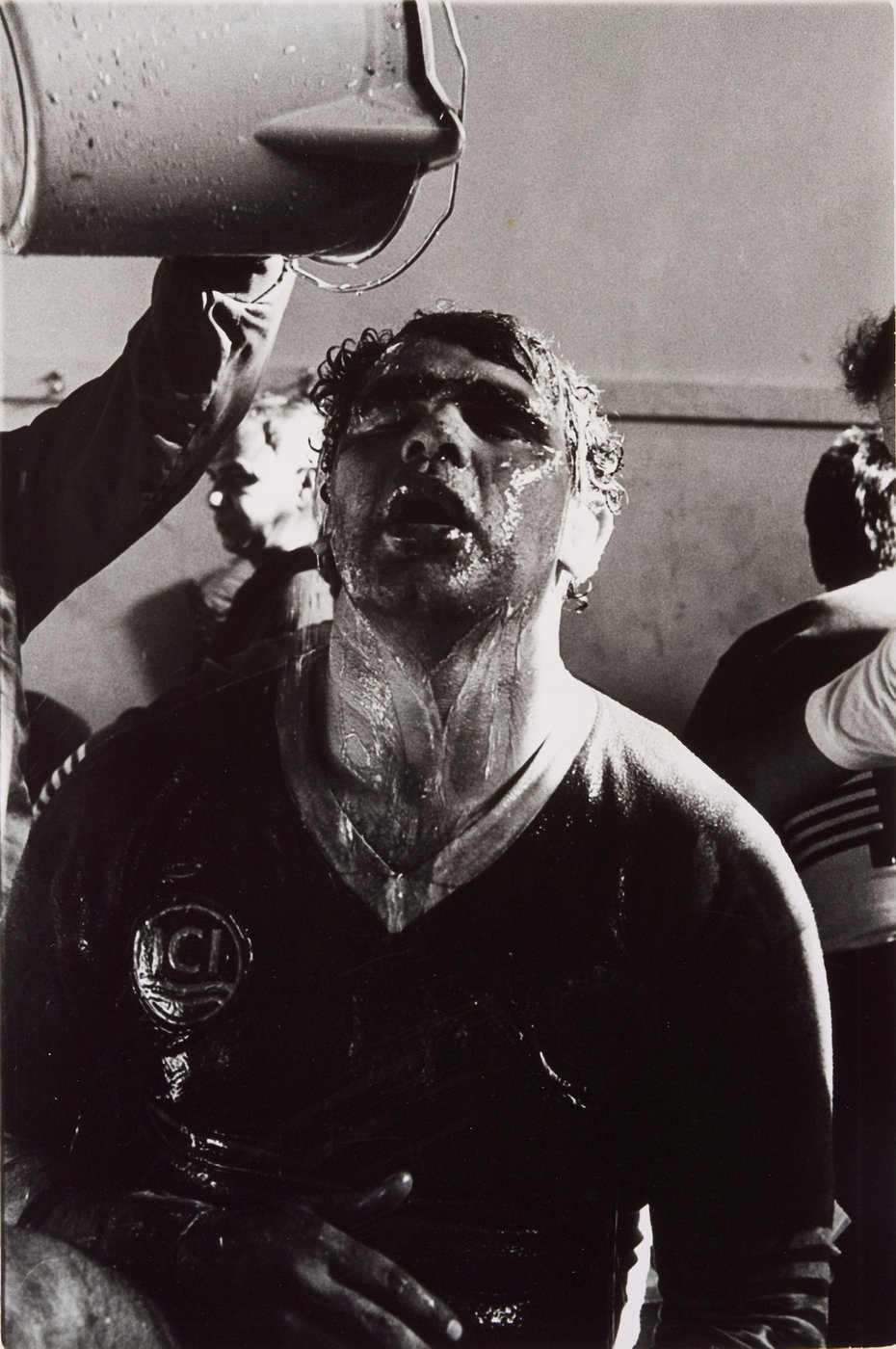 Throughout his career, Eora/Anaiwan photographer Peter Yanada McKenzie has documented the local characters, landscape, events and activities in the Aboriginal community of La Perouse, or La Per, in Kamay (Botany Bay). McKenzie, along with other Aboriginal documentary photographers including Ricky Maynard (born 1953) and Michael Riley (1960−2004), represents a groundbreaking new wave of self-representation, bringing an insider’s understanding of Aboriginal life. Because of McKenzie’s personal relationship with his subjects, the photographs are painfully intimate and the relationship between the audience and subject is hyper-real. 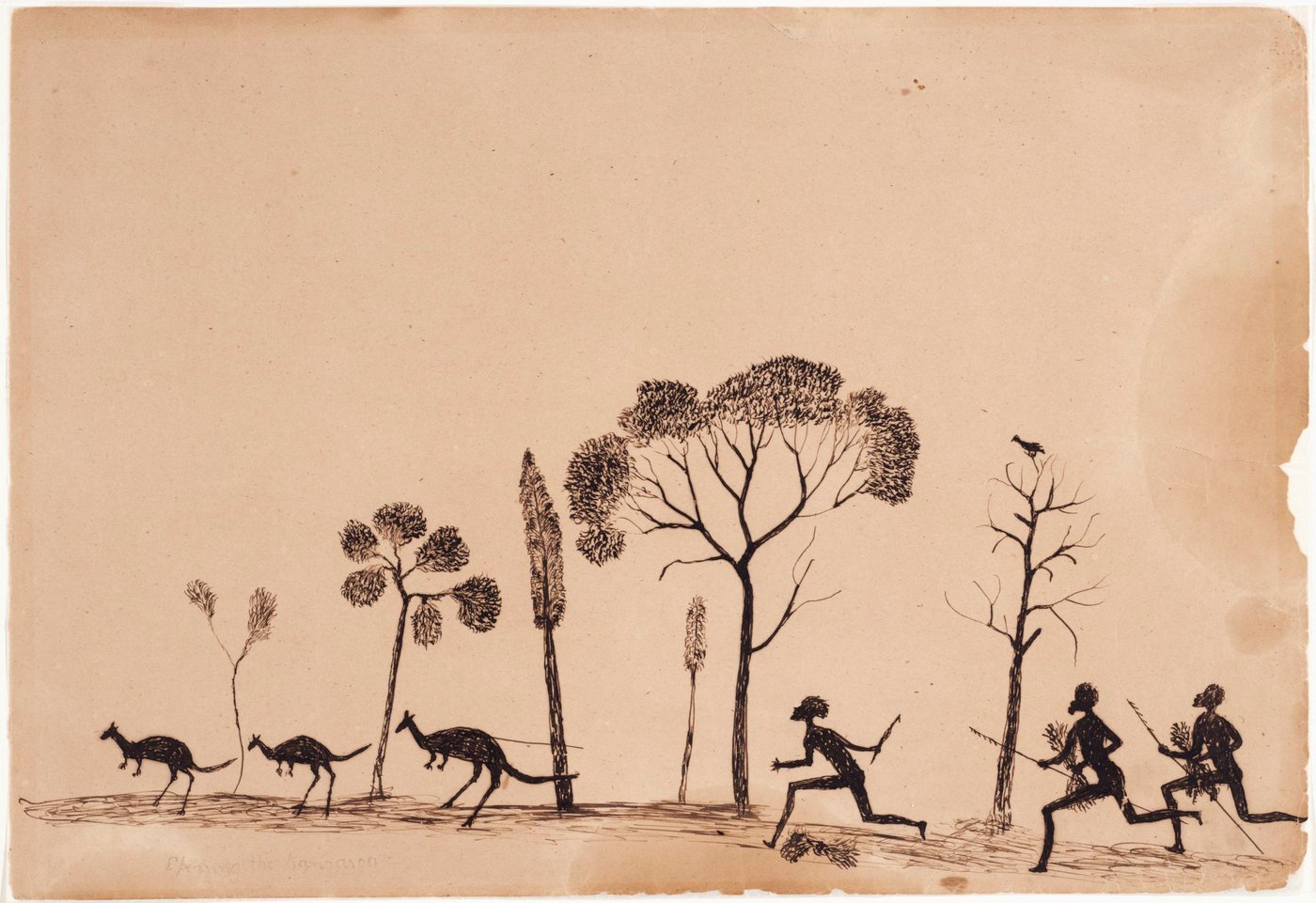 Born around 1836, Kwat Kwat artist Tommy McRae bore witness to the dispossession of his people as the colonial frontier moved through his country along the upper Murray River on what would become the border of Victoria and NSW. An astute and resourceful man, he adapted to the changing circumstances, working first as a stockman, and later producing shields, boomerangs and possum-skin cloaks for sale, along with exquisite pen and ink drawings. Dominated by scenes of ceremony, fighting and hunting action, McRae’s images include vignettes of frontier life. His linear style conveys a strong sense of carving, a balance of black and white, of positive and negative. Although minimal, his drawings are alive with detail and humour. 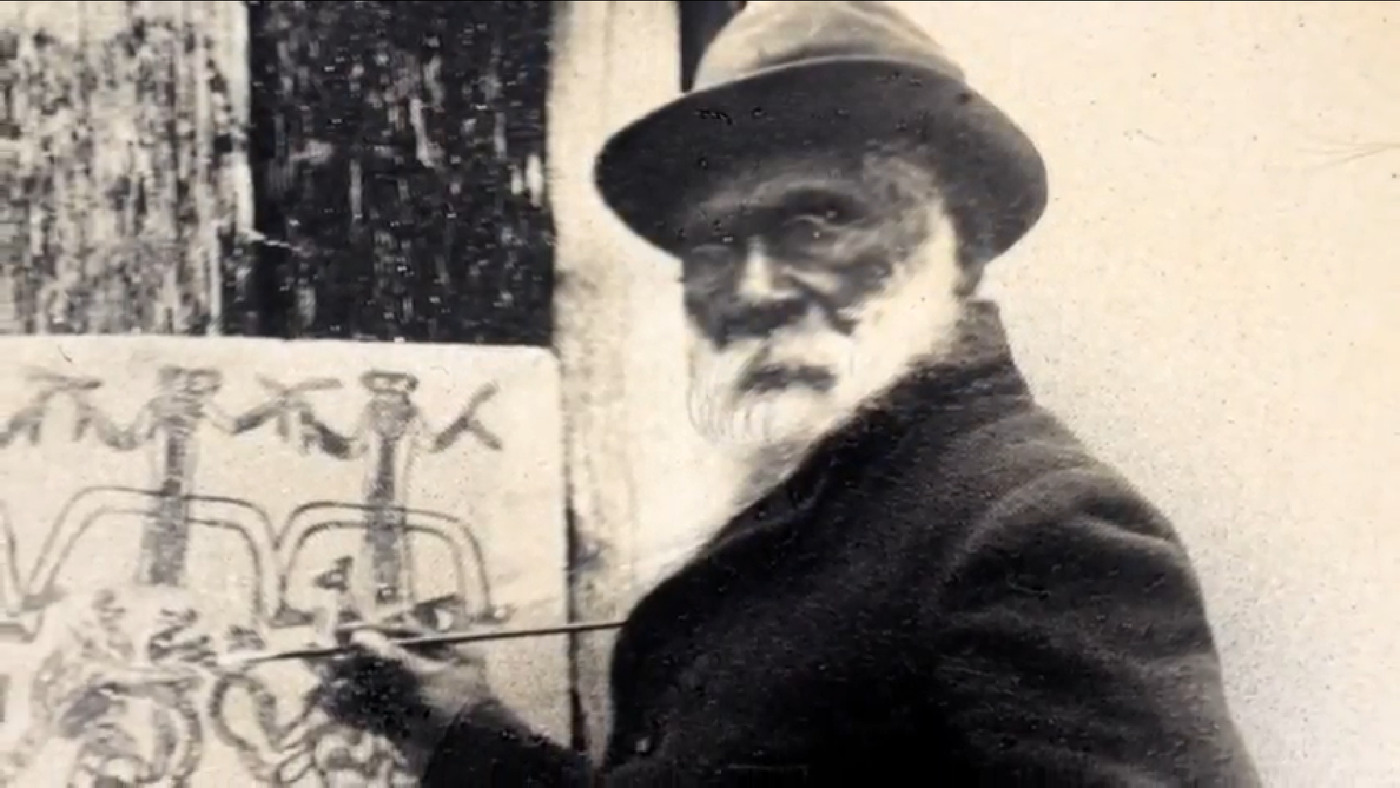 Aboriginal artists of the 19th century