The artworks in this section provide an insight into the lives of artists who call the south-east of Australia home. These works touch on the impacts of colonisation and dispossession while capturing the strength and resilience of each artist and their communities. 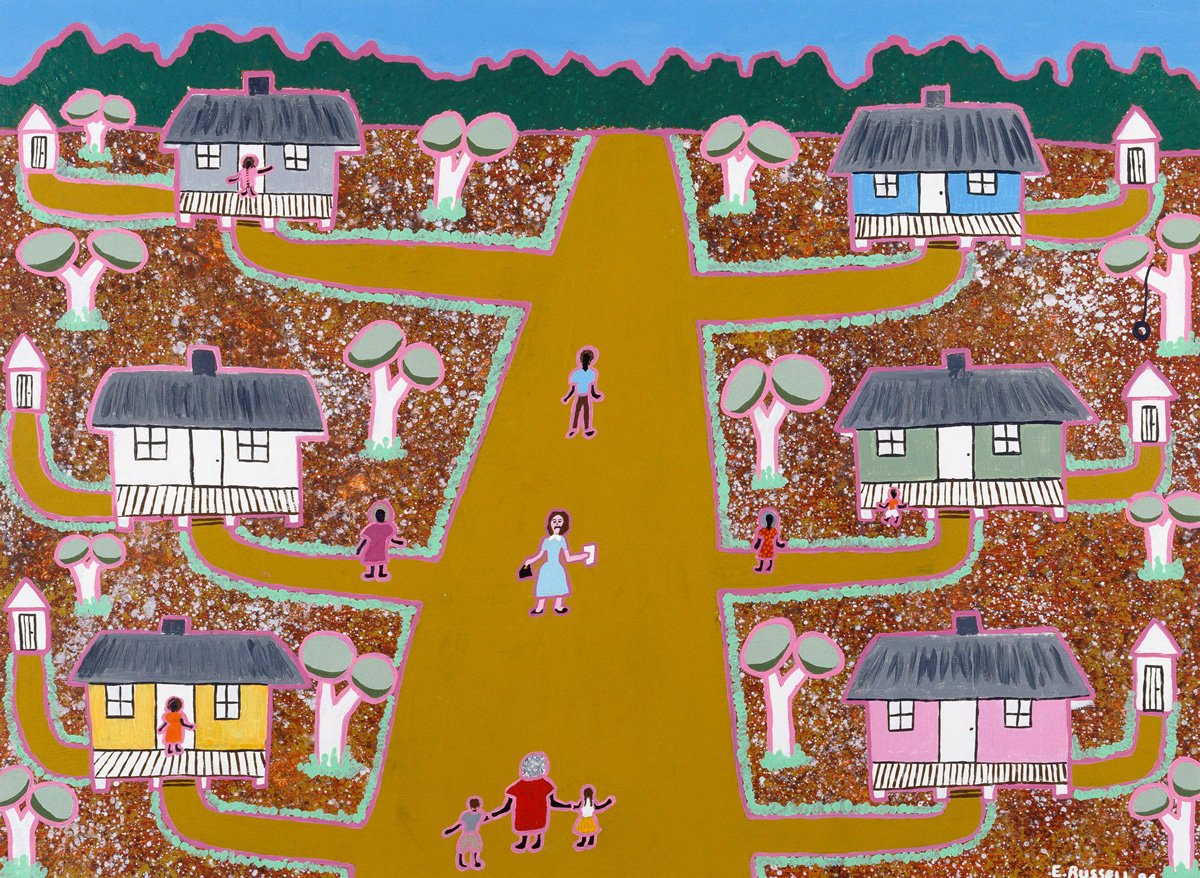 Elaine Russell was born on her Kamilaroi homelands in Tingha, northern NSW, and spent her early years at La Perouse in Sydney. Her family then moved to the Murrin Bridge Mission on the Lachlan River, near Lake Cargelligo, NSW. Russell’s illustrative paintings of mission life, such as attending school and routine inspection days, are animated in her bold and colourful style. Working from an abundance of rich memories and experiences, Russell depicts the human reality of the oppressive conditions on the mission. She has stated that she ‘… just paint[s] about her childhood, rations, bush food, how we lived’. 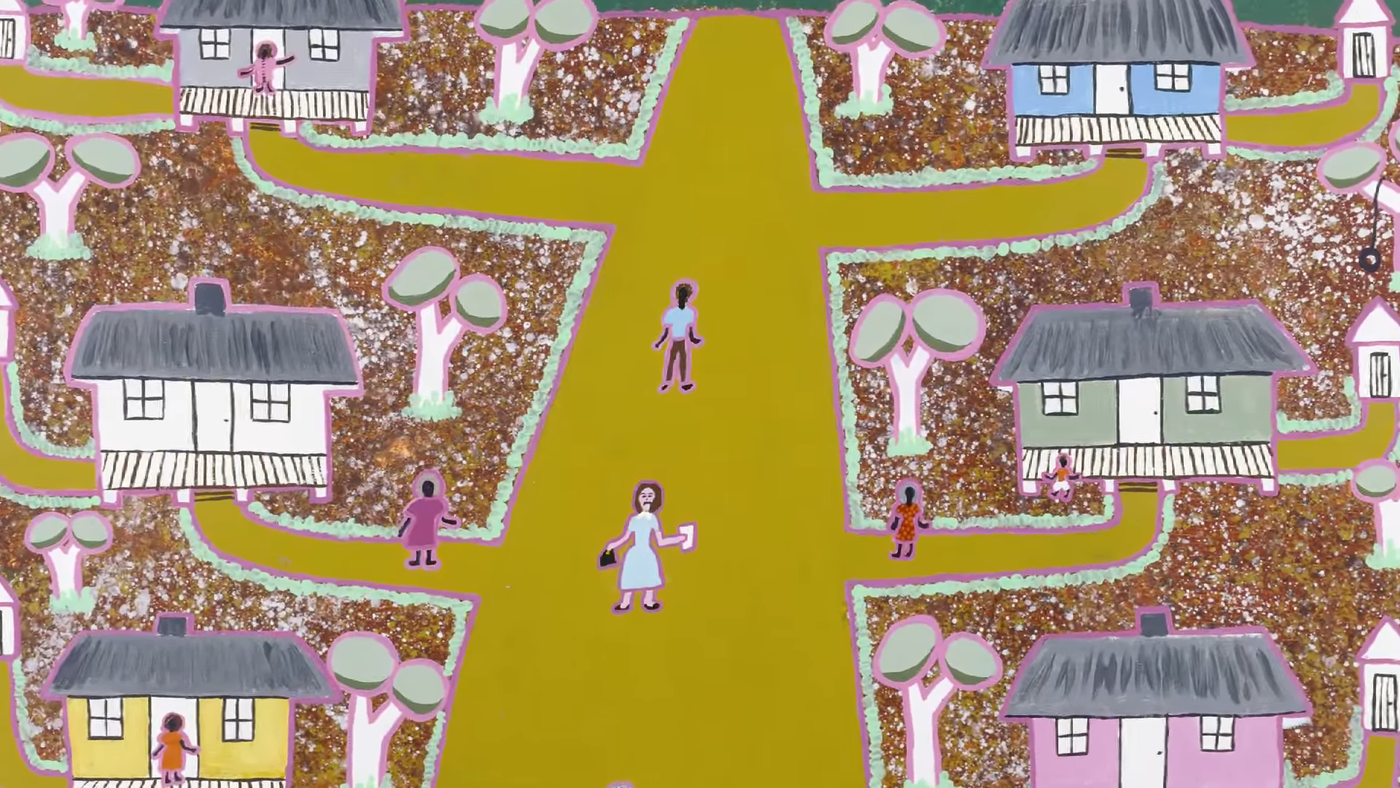 Once a week the manager’s wife would make her inspection of the houses on Murrin Bridge Mission to see if our mothers cleaned them or not, and while she was there would check to see if any children under school age had sores, lice, bad teeth, which were tested accordingly…These were bitter memories for me, growing up on the mission. 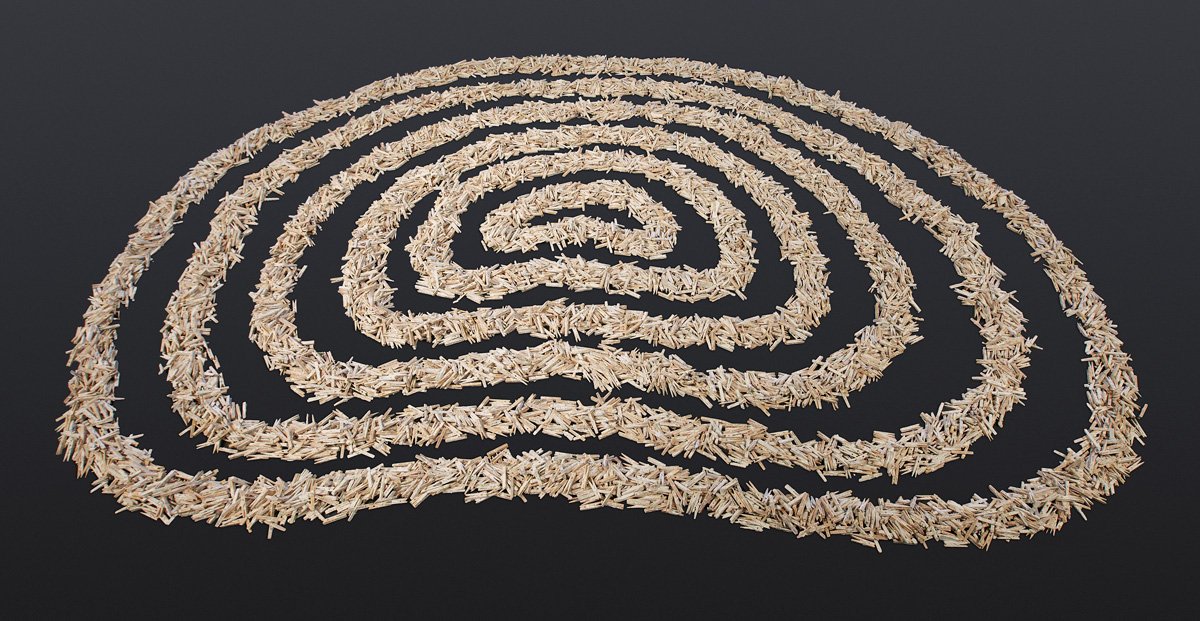 Yaegl artist Frances Belle Parker is interested in acknowledging the past and honouring her ancestors. Her practice is an ongoing study of Ulgundahi, a small island in the Clarence River on the far north coast of NSW, and its surrounding waters, both central to the Yaegl people. During colonisation, the church-run mission officially established on the island in 1904 became a safe haven from the massacres and hardships that ravaged the region. For Yaegl people, who were on country and for the most part together, the oppressive conditions of mission life were endured as a community. For Belle Parker, Ulgundahi is the ‘core’ of Yaegl people. 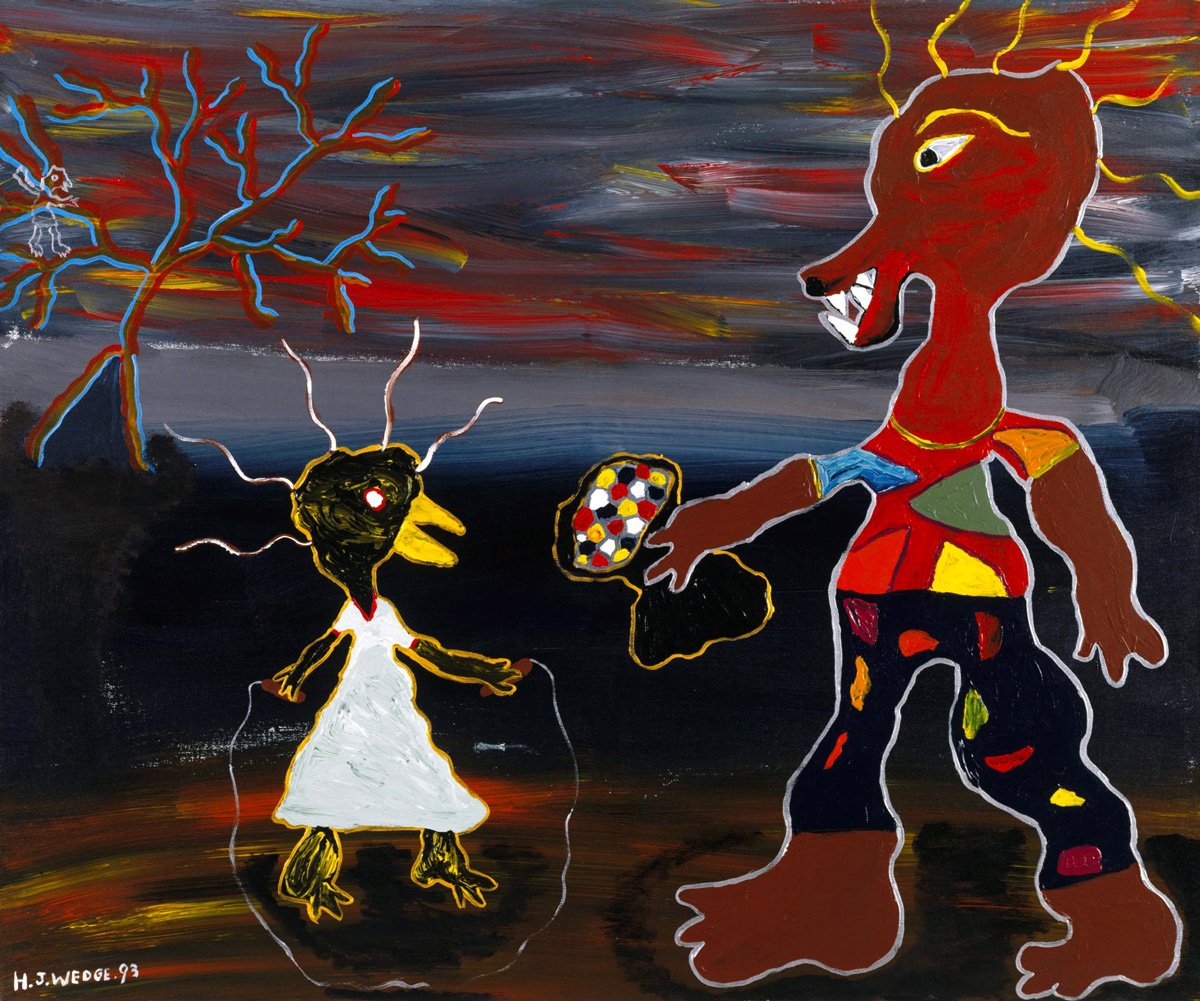 Born in 1957 on Erambie Mission outside of Cowra, in his Wiradjuri country, the late HJ Wedge was a thinker and a storyteller who took on the legacies of colonisation in painting that was raw, visceral and uncompromising. The enduring subject of his paintings was Australian history from a Wiradjuri perspective. His images, chronicling the violence, dispossession and betrayal of colonisation, are peopled by electrifying figures with staring eyes and huge heads who embody the nightmare of the colonial experience as it has been lived by Aboriginal people across the country. 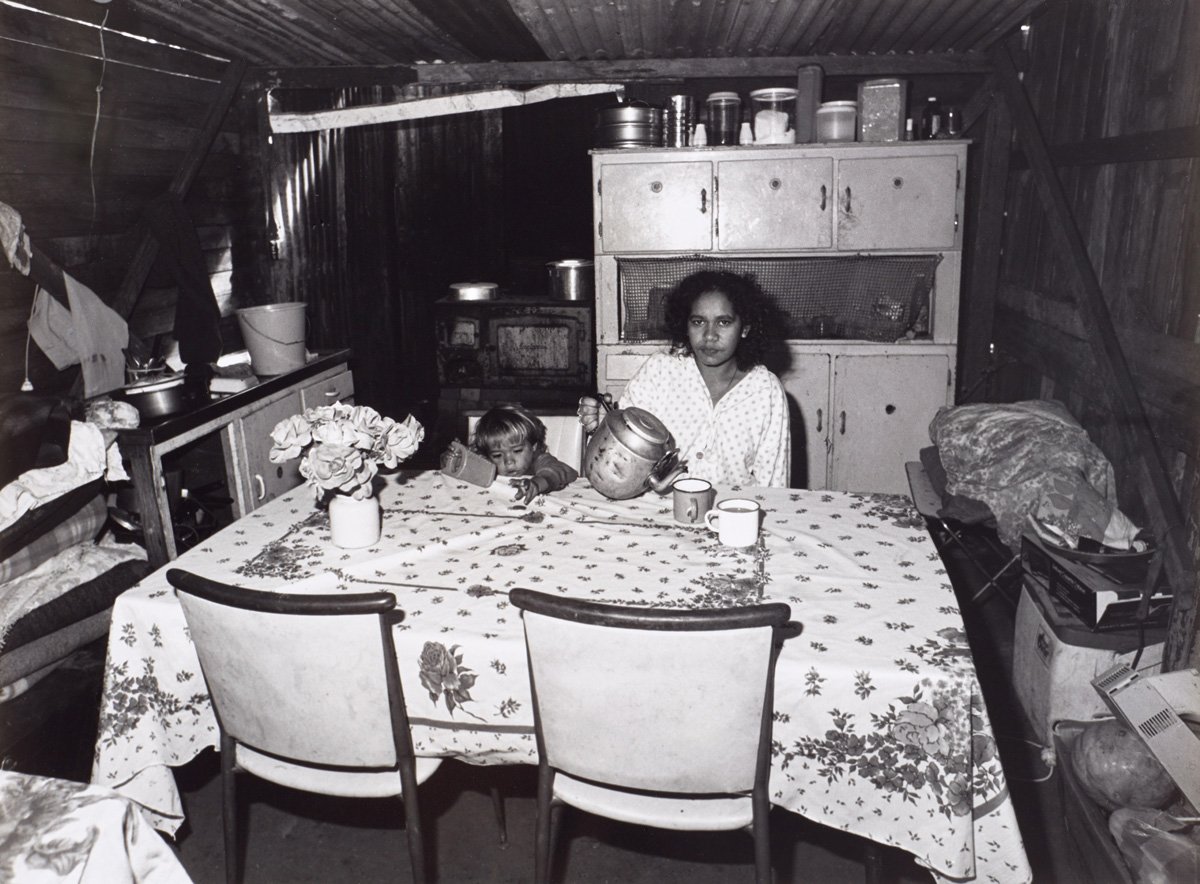 Born in Brewarrina, Mervyn Bishop is a central figure in Australian photography. In 1963 he started a cadetship at the Sydney Morning Herald, later working as the staff photographer for the Department of Aboriginal Affairs in the 1970s. In 1971 he was named Australian News Photographer of the Year for his photograph Life and death dash 1971. In 1988, the year of Australia’s bicentenary celebrations, Bishop was commissioned to document Aboriginal living conditions throughout the state. Bishop was not only interested in capturing the appalling living standards endured by Aboriginal people during a time of national celebration but also in conveying the resilience and strength of his subjects. 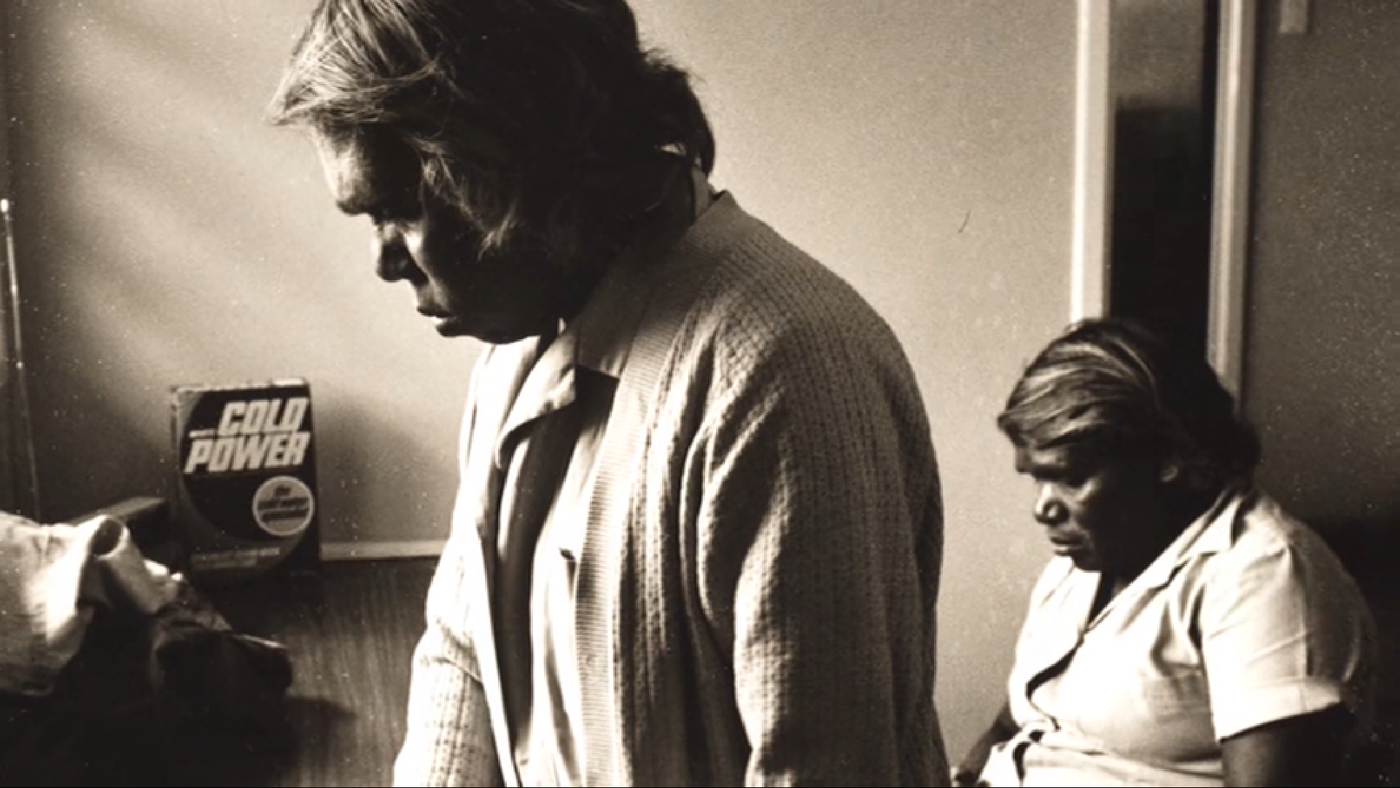 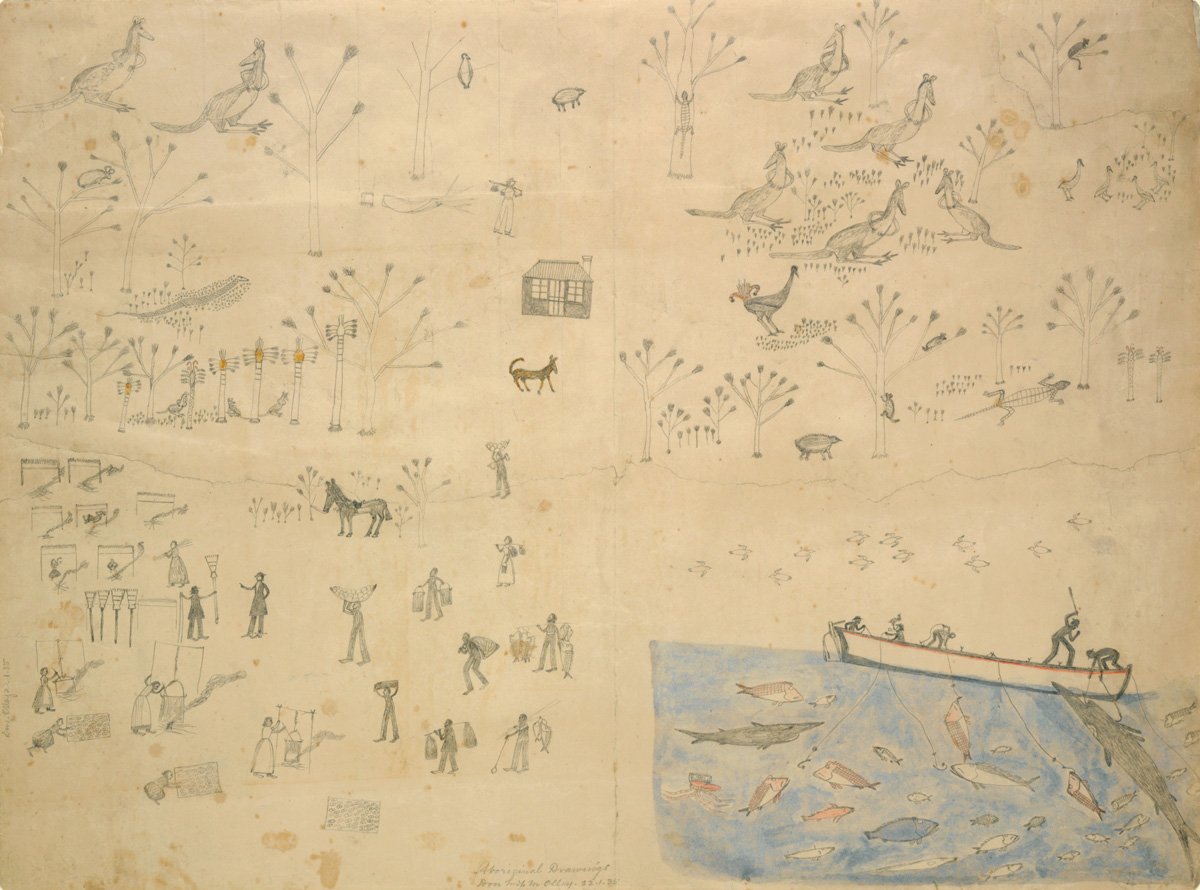 Along with Tommy McRae (c1836−1901) and William Barak (1820s–1903), Mickey of Ulladulla represents a small group of Koori artists who collectively offer a rare insight into the dramatically changing world of the early nineteenth century. With this change, a vast reservoir of knowledge was threatened and only a handful of Aboriginal scribes were in a position to record their culture. Ulladulla documented life as it was unfolding around him, the interaction between colonisation and the enduring traditional South Coast culture. The artist, known locally as ‘Mickey the cripple’, also uniquely placed himself within these images, and he can be seen in the foreground with two walking sticks, overlooking ceremonies.

Born in his Wiradjuri homelands in 1934, Roy Kennedy was brought up at Police Paddock Mission at Darlington Point on the banks of the Murrumbidgee River. Police Paddock Mission superseded Warangesda Mission, one of the earliest NSW missions, established in 1880. Through his art practice, Kennedy represents his family memories of these two missions, continually revisiting the same subjects: regimented mission houses with their outhouses, the authoritarian institutions of the church and the police station, and rambling fences that delineate and symbolise mission life, often set against the bank of the meandering Murrumbidgee River. Kennedy’s distinctive black-and-white etchings have become as iconic as the makeshift houses they depict.

We had a fence around our mission there and you weren’t allowed to go and come and go as you pleased on my mission but we still survived and we lived in a whole community where all our people would be together. We shared and cared for one another. We’d go and do hunting and the old people would cook up a big feed for the whole lot of us…that’s the way we lived. 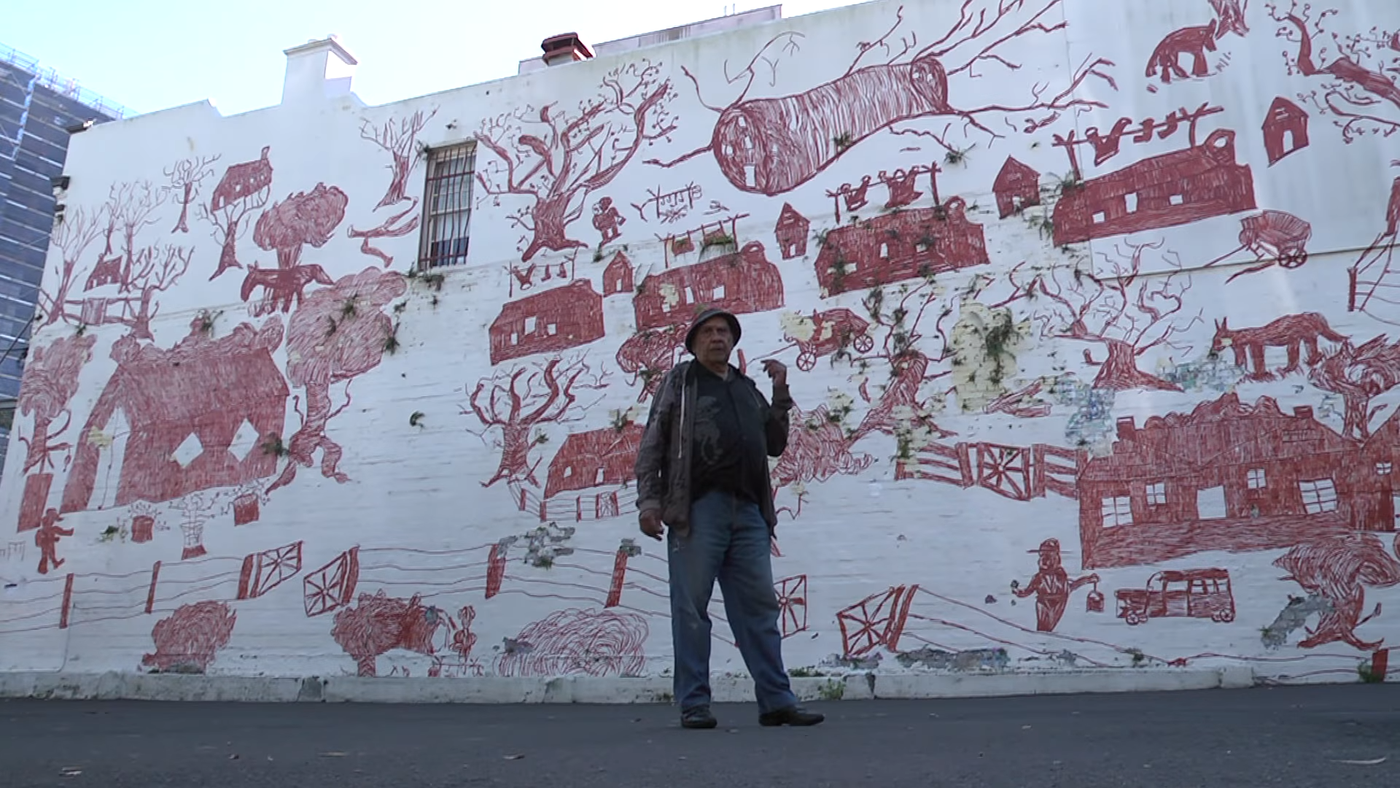