When Nora Heysen became the first woman to win the Archibald Prize in 1938, she finally broke the canvas ceiling. Although the Archibald has been awarded to just ten women over the past century, female artists have figured prominently in the prize since 1921, representing one third of all Archibald artists.

Aileen Dent holds the record for the most Archibald works by a woman with 63 portraits from 1921 until 1962, but very few have survived. Other significant contributors include Mary Edwell-Burke (56), Judy Cassab (41), Dora Toovey (34) and Tempe Manning (26).

These women were well known in their time, but their works have largely vanished from view. Here we recast our focus on the significance of women in the Archibald Prize and celebrate the triumphs of contemporary female artists and the groundbreaking paths they continue to forge 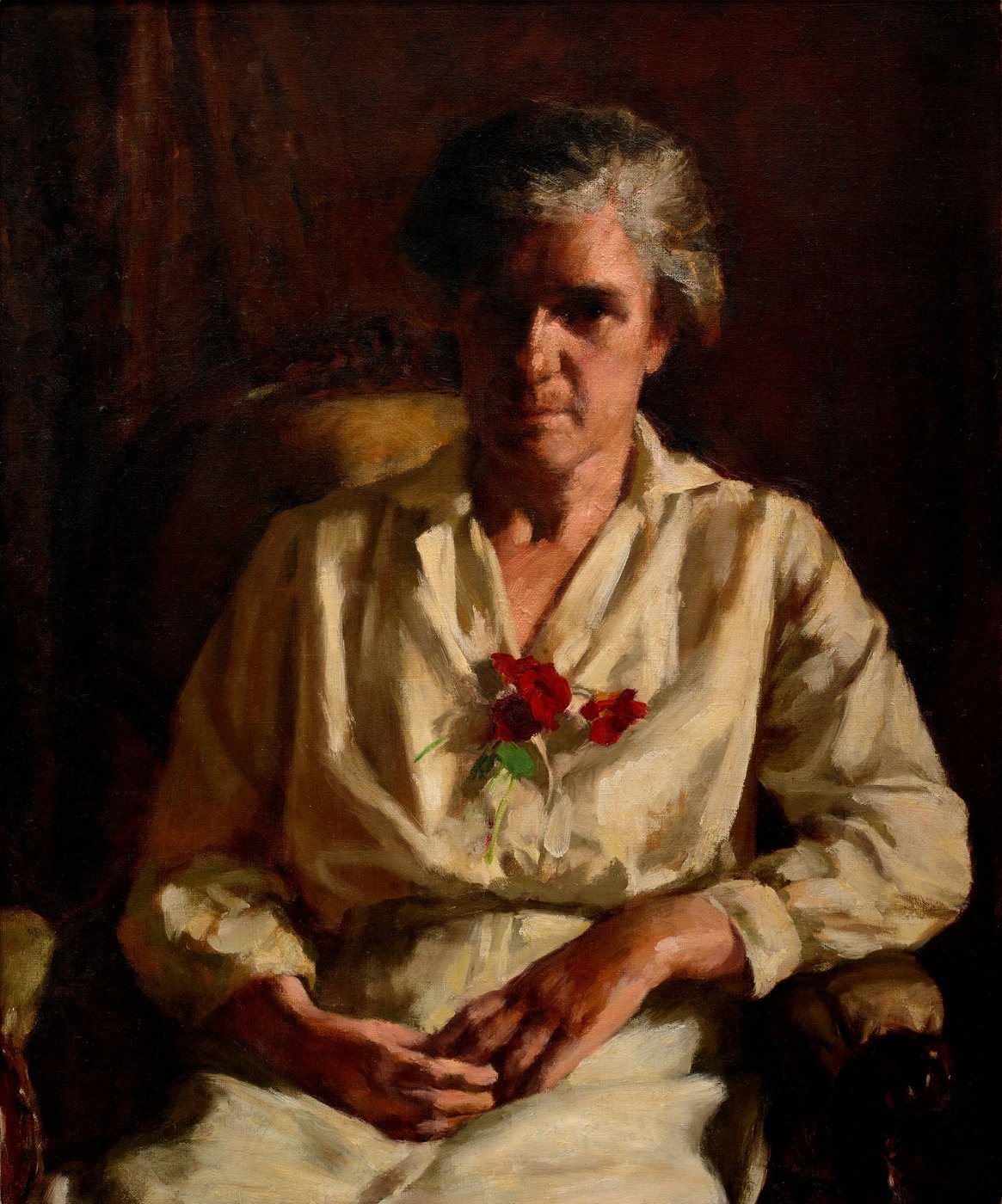 This portrait of Melbourne artist Estelle Mary (Jo) Sweatman (1872–1956) – then aged 50 – was one of 13 Archibald portraits by Alice Marian Ellen (AME) Bale, a prolific contributor in the early decades of the prize. It was painted the year of Bale’s first solo exhibition at the New Art Salon in Sydney. To date, Sweatman’s own 1922 portrait of Bale – one of her four Archibald works – has not been found.

Both artists were students alongside Max Meldrum at Melbourne’s National Gallery School under Frederick McCubbin and Bernard Hall. As council members of the Victorian Artists Society, in 1919 they were instrumental in forming – in sympathy with the aims and methods of Max Meldrum – the breakaway group Twenty Melbourne Painters, which flourished under Bale’s 36-year leadership. Exhibiting with the Melbourne Society of Women Painters and Sculptors, neither Sweatman nor Bale married or travelled overseas; however, Bale’s work was hung both at the Paris Salon and London’s Royal Academy. Sweatman gave much of her early career to portrait painting, later turning to landscape, particularly in Victoria’s Warrandyte region, with fellow Archibald contributor Winifred McCubbin, whose work also features in Archie 100.

Bale’s evocative portrayal of her friend displays a free and supple handling of her medium, with every stroke carefully considered. It reveals her unique approach to Meldrum’s tonalist method, and her reverence for the Dutch old masters Rembrandt and Johannes Vermeer. 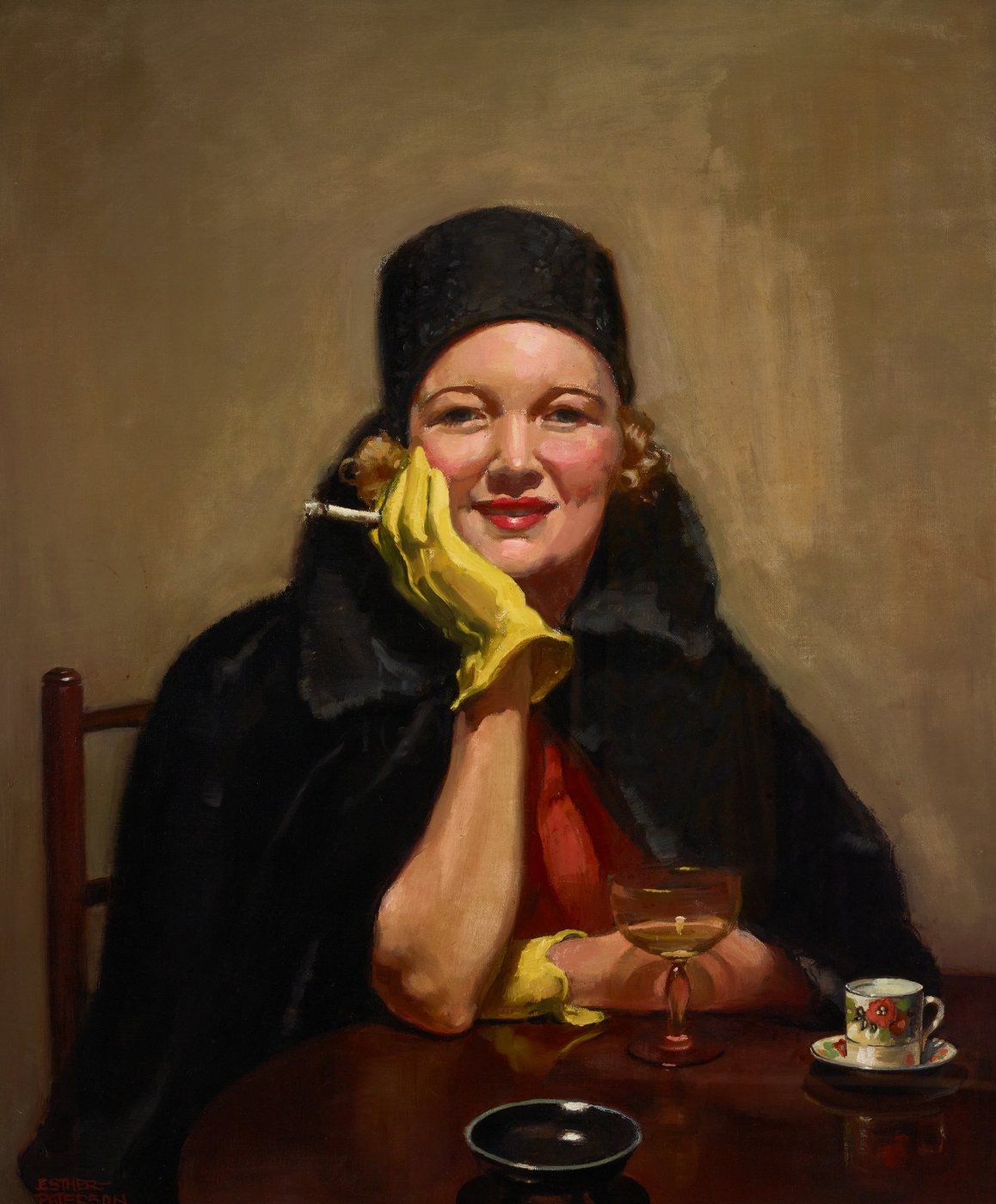 Betty Paterson (1895–1970) and her sister Esther were born into an artistic family. Their father Hugh Paterson, brother of landscape painter John Ford Paterson, and mother Lizzie encouraged their daughters to follow creative paths, as did their neighbour, artist Frederick McCubbin. Esther studied alongside WB McInnes at the National Gallery School under Bernard Hall and later was the subject of McInnes’ 1926 Archibald-winning portrait, Silk and lace. Musically gifted, Betty trained and performed as a classical singer. Esther and Betty also took classes at the Meldrum School of Painting, absorbing Max Meldrum’s tonalist teachings.

The sisters became commercial artists. Their illustrations for The Bulletin, Punch and Lone Hand in the 1920s celebrated independent, modern womanhood and reflected the more liberal spirit of the decade. They were prominent members of the Melbourne Society of Women Painters and Sculptors and, after World War II, ran classes for war veterans with disabilities.

Esther’s portrait of the exuberant Betty, then 43, was shown the year Nora Heysen became the first woman to win the Archibald Prize. This portrayal of a confident modern woman – cigarette in hand and wine glass close by – was immediately procured by prolific art collector and patron to Australian artists, Howard Hinton. It is now part of the renowned Howard Hinton Collection at the New England Regional Art Museum. 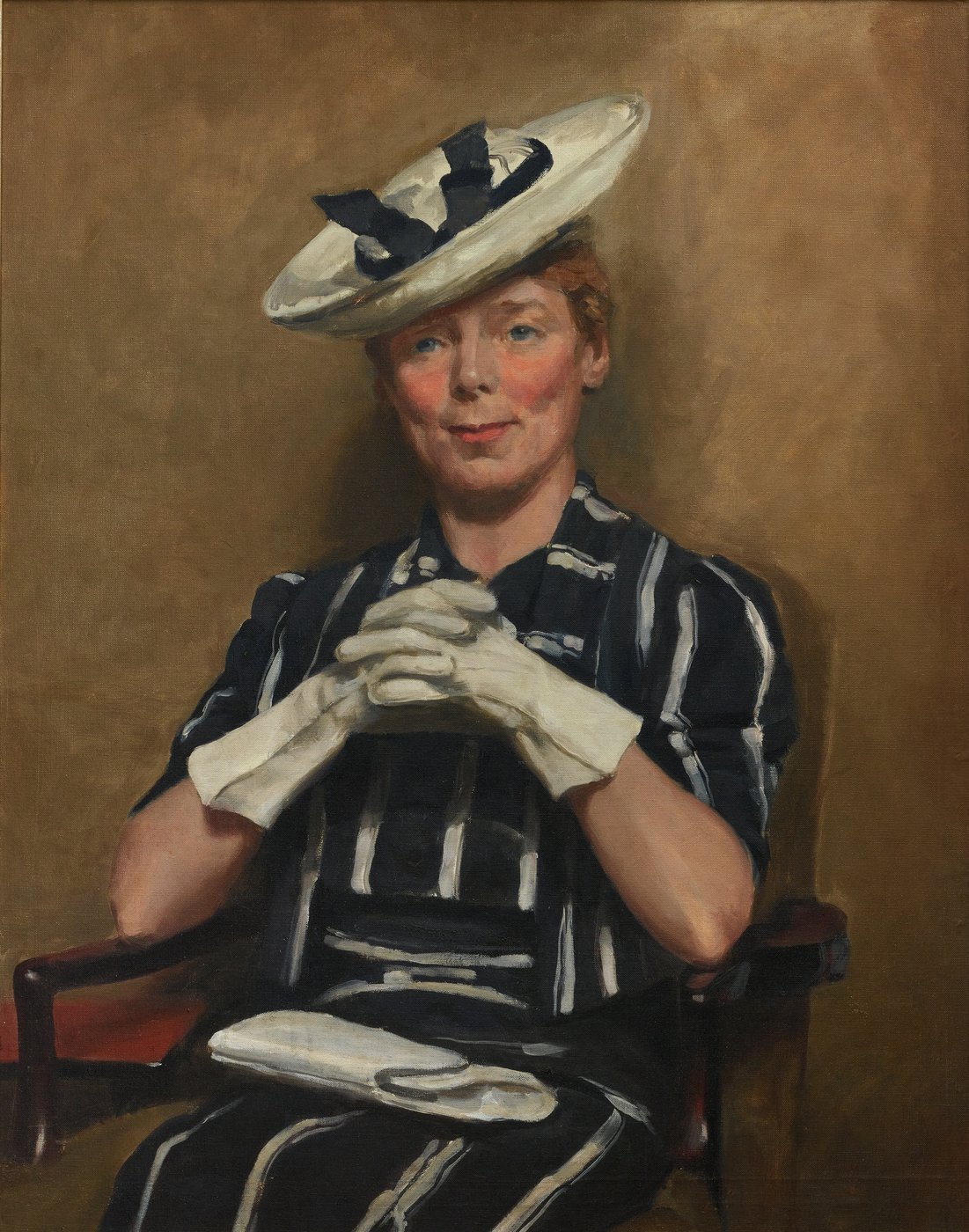 Violet Muriel Musgrave met WB McInnes – who would become the inaugural Archibald winner – while a student at Melbourne’s National Gallery School. They married in 1915. As for many women artists of the time, marriage and children took precedence over her career; however, in 1932, before a year-long European tour with her husband, Violet McInnes resumed painting.

From the 1930s, McInnes was a frequent exhibitor with the Australian Academy of Art, Victorian Artists Society and the Melbourne Society of Women Painters and Sculptors, much admired for her lively flower paintings. She held her debut solo exhibition in 1937, the year she first entered the Archibald Prize with a portrait of WB. After the death of her husband in 1938, which was followed by her son Malcolm dying in an RAAF air crash in 1939, McInnes immersed herself in her art.

McInnes most likely met Sybil Craig (1901–89) while Craig was attending WB’s classes at the National Gallery School in the late 1920s. In the 1940s, Craig cemented her place in the city’s modern art scene with her vivid, light-filled compositions. In 1945, she became the third woman appointed as an official war artist, painting women working in Australian munitions factories. McInnes’ portrait reveals a chic, independent woman – a vibrant figure in Melbourne society. 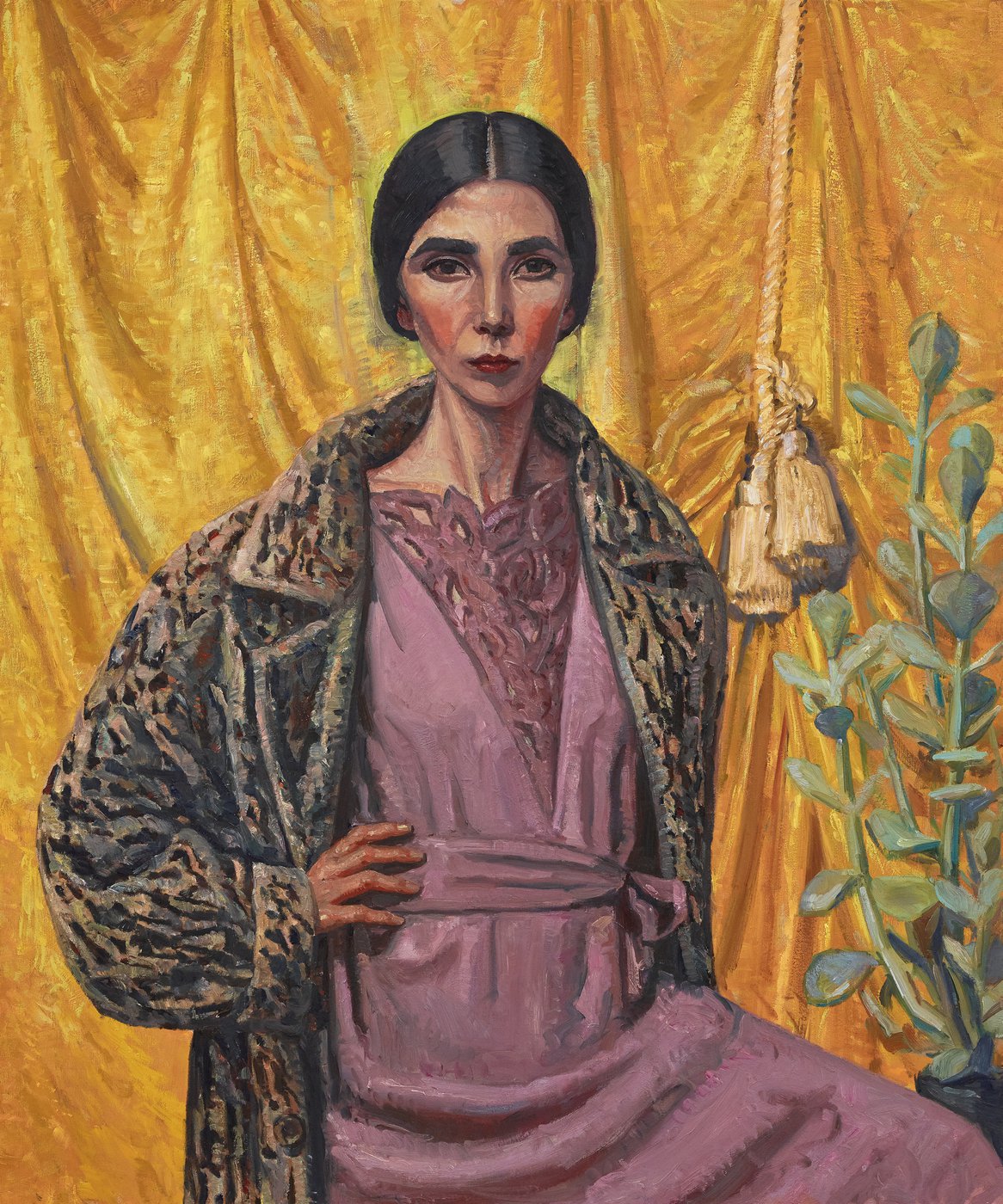 Five-time Archibald finalist Yvette Coppersmith became the tenth woman in the past century to win the award, with this self-portrait painted when she was aged 38. Coppersmith is known for her portraits in oil, and she uses herself as a subject on frequent occasions. Her Archibald sitters have included human rights advocate Gillian Triggs and media personality John Safran. Her first self-portrait was a finalist in 2016.

Coppersmith trained at the Victorian College of the Arts. Her early explorations with photorealism were inspired by portraitist Mathew Lynn, an Archibald finalist 17 times between 1989 and 2021, and winner of the People’s Choice award and the Packing Room Prize. A series of stylistic changes soon followed, as her visual language encompassed experiments with cubism and abstraction. She often references artists whose work she esteems, with George Lambert’s Self-portrait with gladioli 1922 – also seen in this display – invoked here, with her composed stance and matter-of-fact gaze declaring her self-assuredness.

His style was academic, yet he supported the avant-garde in Australia and painted portraits of his artistic contemporaries Thea Proctor and Hera Roberts – both independent, self-possessed style-makers at a time of burgeoning female empowerment. In referencing George Lambert’s style, it’s like an outfit slipped on, creating a fixed image of an ever-changing self. 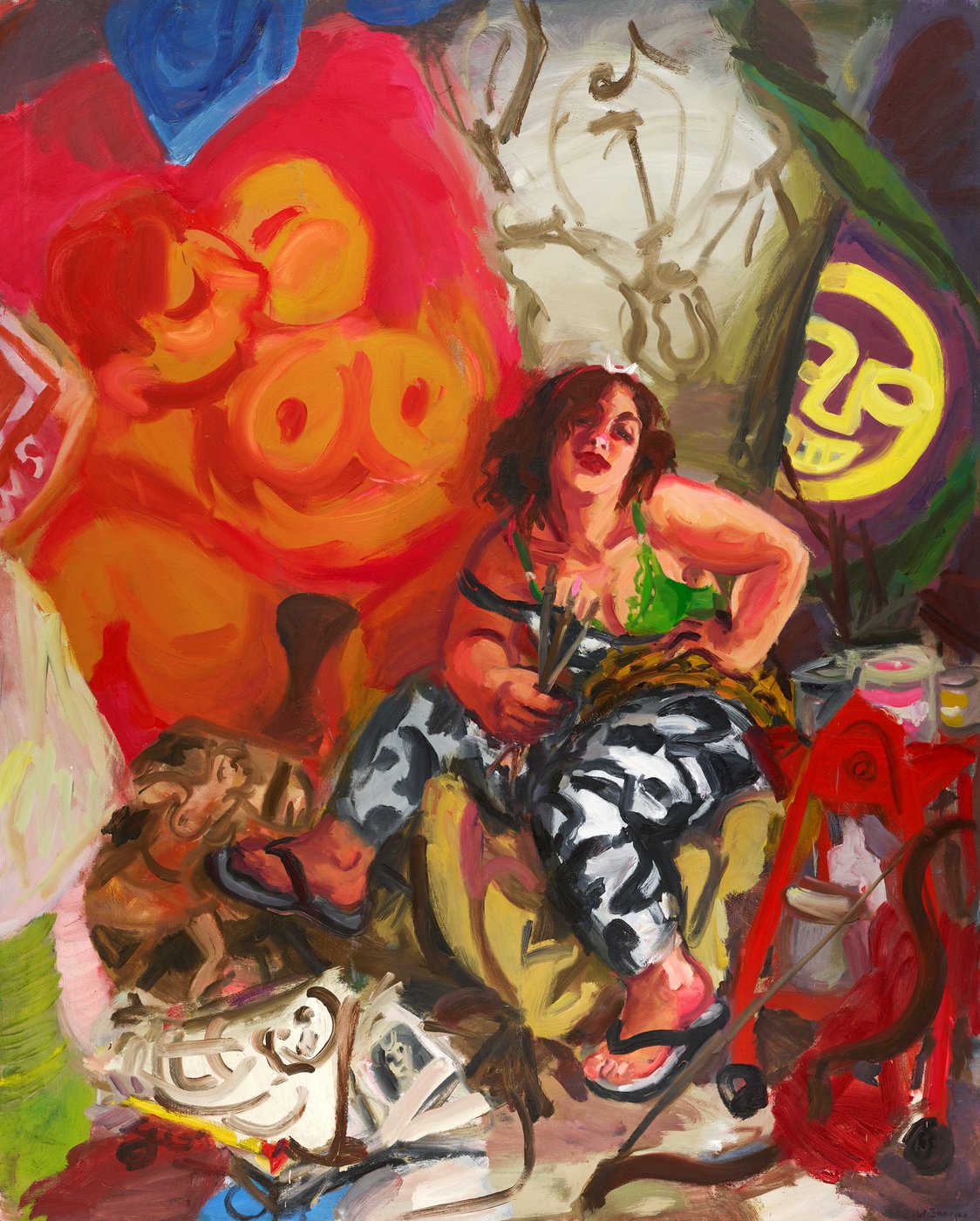 Self-portrait as Diana of Erskineville

After a hiatus of ten years, Wendy Sharpe became the fifth woman to take home the Archibald with this unabashed self-portrait, in which she humorously assumes the guise of the Roman goddess Diana, her hunting bow replaced by paintbrushes. It was the first self-portrait by a female artist to win, and one of four self-portraits Sharpe exhibited in the Archibald from 1994 to 2020.

Sharpe’s influences are broad, including expressionist painters Max Beckmann, Edvard Munch and Emil Nolde, and Australian artists Arthur Boyd and Kevin Connor. Her exuberant, richly coloured canvases are filled with the epicurean bodies of stage performers, with dramatic lighting creating evocative settings for her figures. In 1993, she wrote:

_ […] a figurative artist acts as a kind of stage magician theatrically conjuring up people and places. Ideas, experiences are personified, or made visible; the incorporeal is metamorphosised into human, ghost or allegorical figures._

A graduate of City Art Institute (now UNSW Art & Design), Sharpe has held over 70 solo exhibitions. In 1999, she was appointed an official war artist – the first woman since World War II – assigned with troops in East Timor. Following in the footsteps of Yulparija artist Weaver Jack, whose depiction of Country was a controversial portrait in the 2006 Archibald Prize, Tjungkara Ken’s bravura self-portrait defies the Western art historical canon, with her painting of self as a living embodiment of Country. A century after the inaugural Archibald Prize, the notion that a person’s identity may be revealed in portraiture through codified cultural designs has progressively become accepted practice.

An artist at Tjala Arts on Aṉangu Pitjantjatjara Yankunytjatjara (APY) Lands, Tjungkara Ken, with the Ken Sisters Collaborative, won the 2016 Wynne Prize for landscape painting, with their work depicting the Seven Sisters. As the sisters are being chased across Country by an evil man named Wati Nyiru, they work together to avoid falling for his tricks. Wati Nyiru can change shape into different rock formations and landmarks. These sites, which Ken paints, remain part of the landscape and are cared for by the artist and her family. In her Archibald self-portrait, Ken also paints the Seven Sisters, coalescing the genres of landscape and portraiture. 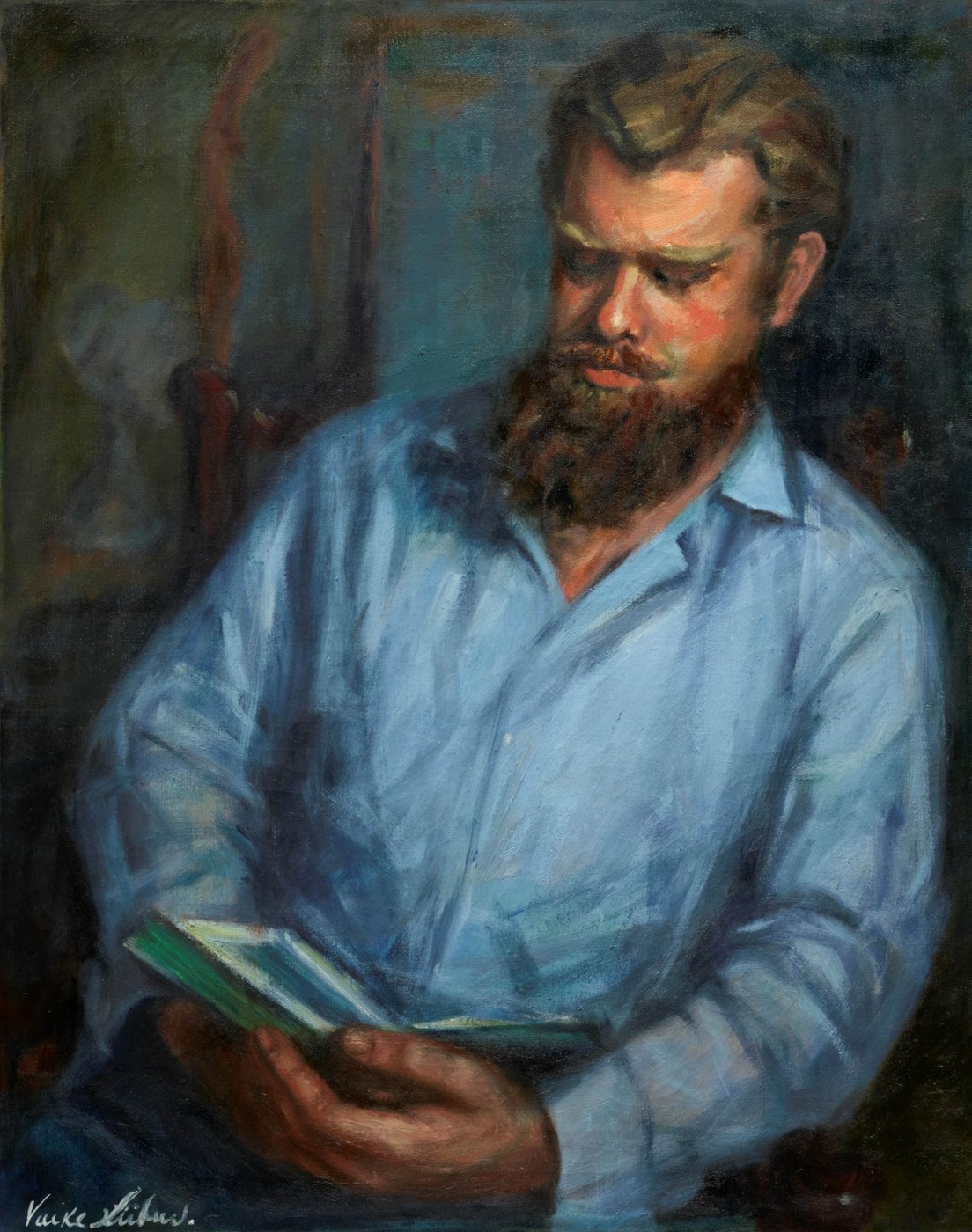 Vaike Sabbi arrived in Sydney from her native Estonia aged 11. She studied window dressing, millinery and art at East Sydney Technical College (now the National Art School), using her skills to dress her mother’s Paddington store display. Aged 22, and recently married, Vaike Liibus opened her own millinery business; however, World War II intervened and her Piccadilly Arcade shop closed. During the war years she studied under Hayward Veal at Max Meldrum’s Sydney school in Rowe Street, then at the Julian Ashton Art School in The Rocks, where her natural skill as a portraitist emerged.

Widowed in 1954, Liibus took solace in her art. Two years later, her first Archibald work – a portrait of artist Joshua Smith – was selected as a finalist. She became a regular Archibald contributor, with all her portraits depicting men, six of them fellow artists. Liibus’ reputation as a portrait painter grew, leading to numerous commissions, and her portrait of artist Guy Warren from the 1968 Archibald won the 1969 Portia Geach Memorial Prize.

Liibus’ 1958 Archibald portrait is of self-taught artist Gerard Havekes (1925–2011), whose public ceramic works adorn buildings across Australia. It shows the ebullient 33-year-old Dutch émigré in a moment of quiet contemplation. Liibus painted directly from life, her loose brushwork and subtle palette underpinning an informality she sought in all her portraits.

This portrait of painter Francis Roy Thompson (1896–1966), with its rich and glowing cast of viridian green, portrays one of Adelaide’s central figures of post-war modernism and a three-time Archibald artist. A member of Adelaide’s Hexagon group with Hick, Thompson was born in Mansfield, Victoria and trained under WB McInnes and Bernard Hall in Melbourne before settling in Adelaide around 1950. There he developed a vigorous expressionist style in his images of suburban scenes. 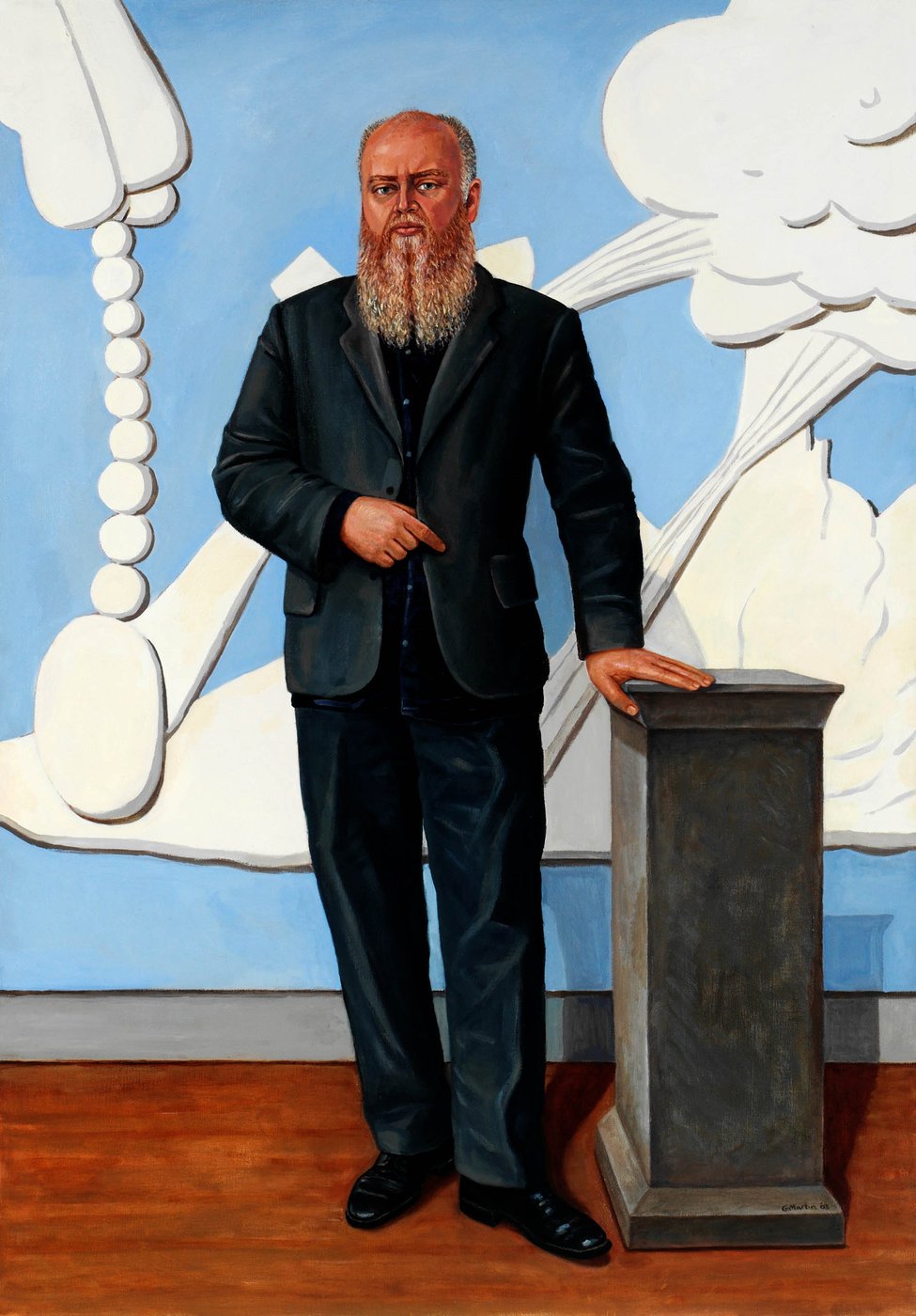 Gabrielle Martin first met Tony Clark (born 1954) in 1988 as a student at Prahran College, followed by further studies in painting and art history with Clark at the Victorian College of the Arts. Growing up absorbing classical myths and legends, Martin was influenced by Clark’s explorations into the language of classicism and postmodernist theories.

Clark’s childhood in Rome inspired an early love of classical art, architecture and literature. His ‘Jasperware’ series is based on Josiah Wedgwood’s mass-produced ornaments from the mid 1700s recalling ancient Greek vases.

Martin’s exquisitely rendered portrait of Clark – who was then 50 and living in London – reveals an intimate, measured exchange unfolding between sitter and painter, ‘made concrete in paint’. Martin recounts that the work plays with ‘concepts of idealisation that are always present in the mentor/student relationship’. She positions Clark before one of his Jasperware paintings, hand resting on a classical pedestal, conjuring 19th-century photographic studio portraits.

Revealing her motivation for taking up portraiture in the 1990s, at a time when the genre was seemingly moribund and immaterial, Martin wrote:

Painting portraits is quite an intimate process. The subject agrees to be looked at closely over many hours. This potentially makes them quite vulnerable. That is their gift to the painter, and I feel privileged for the time I have spent painting people.