History of the collection

Edward Combes and Sir Alfred Stephen were both members of Parliament and the newly formed Academy of Art. It was probably through their influence that the Government, on 30 July 1874, transferred a vote of £500 originally intended for the Australian Museum to the purchase of works of art by the Academy. This allocation of public money towards the purchase of art for a national collection is one of the key events in the foundation of the Gallery.

Five members of the Academy were appointed as trustees and entrusted with the administration of the grant. It seems, however, that the power of these new trustees did not extend into a second year. In 1875 a separate government vote of £1000 was made to the Academy rather than to the ‘Art Gallery’. Arguments over allocation of this money were resolved when Cabinet itself decided that the £500 ‘in aid of the proposed Gallery of Art’ together with the £1000 ‘in aid of the NSW Academy of Art’ would be spent, except for rent of premises, on works of art. The Government Gazette of 25 February 1876 published the names of the five trustees who would administer these funds.

The Gallery’s impressive collection of late 19th-century Australian art is due largely to the tradition, begun in 1875, of acquiring local contemporary paintings. One of the first decisions made by the trustees, when entrusted with the initial vote of £500, was to commission the watercolour Apsley Falls from Conrad Martens, the most respected artist in the colony. The bulk of the first grant of £500, however, did not go on local works but towards the purchase of English watercolours. In London, Nicholas Chevalier and Colin Smith bought six landscapes, all by late Victorian artists now largely forgotten. For the second vote of £500 a single oil painting was acquired, Ford Madox Brown’s Chaucer at the Court of Edward III. The European collections were initially based on a policy of acquiring contemporary British and Continental art on the recommendations of art advisers in London and Paris.

The Department of Contemporary Art was founded in 1979. Purchases were made prior to that time, but it has been in the period since then that a lively exhibition program and acquisitions policy have been implemented. The collection focuses upon work which has developed since the 1960s, with an emphasis on the more recent practices of the 1980s, 1990s and 2000s. The Gallery’s collection of Asian art encompasses many aspects of the diverse cultures of the region. The genesis of the collection was a large gift of Japanese ceramics and bronzes presented by the Japanese government after the 1879 Sydney International Exhibition. A distinct Department of Asian Art was established in 1979. The Gallery’s collection of Aboriginal and Torres Strait Islander art began with the 1947 acquisition of the watercolour Amulda Gorge by Edwin Pareroultja. John (later Djon) Mundine, art adviser from Ramingining, was appointed the Art Gallery of New South Wales’ curator-in-the-field in 1984. This was the first appointment of an Aboriginal person to a curatorial position in an Aboriginal art department of a public gallery.

From 1874 to 1880, the annual amount made available to the Gallery for the purchase of works of art was £1500. In 1880, it rose to £5000. For 50 years after 1896, £2000 was, on average, all the Gallery received. The grant began to rise steadily after the Second World War. Today acquisitions are acquired mainly through the Foundation, the Art Gallery Society, donations, grants, bequests and gifts. The first Australian oil painting to enter the Gallery’s collection, William Piguenit’s Mount Olympus, Lake St Clair, Tasmania, the source of the Derwent, was the gift of 50 subscribers. This tradition of patronage has remained crucial to the development of the collections since that time. Important additions to the collections have come through the generosity of James Fairfax, Margaret Olley, Patrick White, Ken and Yoko Myer, the Mervyn Horton Bequest, the Rudy Komon Fund, the Nelson Meers Foundation, the Gleeson O’Keefe Foundation and the John Kaldor Family. Many private endowments take the form of prizes and scholarships for the encouragement of artists, such as the Archibald, Wynne and Sulman Prizes, the Dyason Bequest, the Basil and Muriel Hooper Scholarships, and two art studios in Paris. A program of collection benefactors aims to raise funds for the acquisition, care, study and presentation of works of art for the collection. 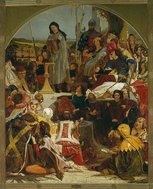